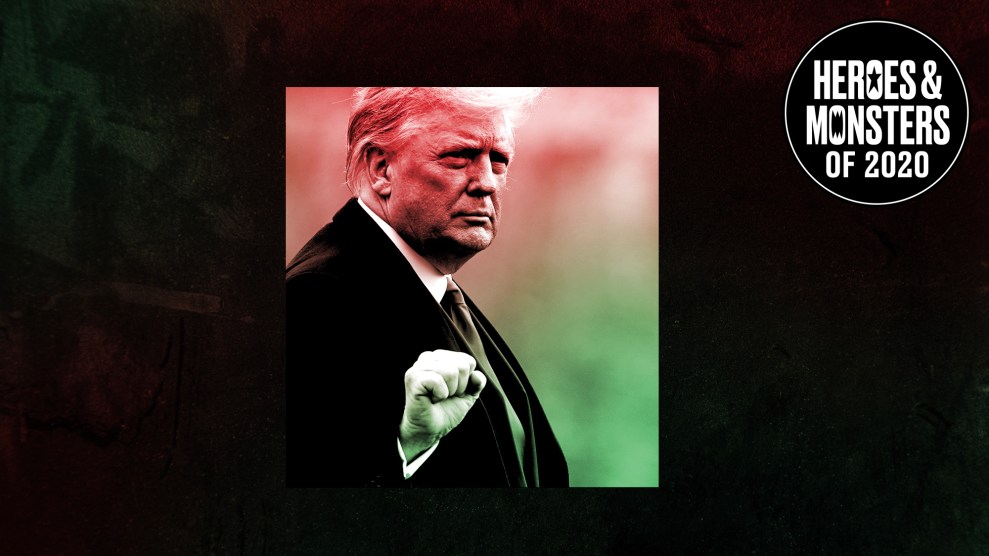 On October 5, President Donald Trump lumbered out of the doors of Walter Reed Medical Center, three days after he’d been checked in with a case of COVID-19. He stopped, raised his right hand in a fist and shook it a few times in a motion that combined a pumped-up “rock on” and a jerking-off “whatever.” The gesture instantly conveyed that humility would not be a lasting effect of Trump’s run-in with the disease that he’d downplayed even as it had killed more than 200,000 Americans to date. He was still winning.

The Trump fist pump is the visual punctuation mark of his presidency, dropped during arrivals and departures, at the kickoff of a speech or in the afterglow of a rally, even in a Christmas message. In the moment, it can come off as a cheesy throwaway move. It often makes Trump look like a duck-faced doofus, like when he did a double-fisted pump in the cab of a big rig or on his way to a 9/11 commemoration. But when it’s frozen in photographs, the fist hardens into a defiant, menacing embodiment of authoritarian swagger.

Trump’s presidency opened with the image of him raising his clenched fist at the end of his inaugural speech, in which he’d embraced the nativist slogan “America First” and called for “total allegiance” to the nation. It signaled not a transition but a power grab. This July 4, he posed, fist aloft, in front of Mount Rushmore before denouncing “far-left fascism that demands absolute allegiance,” a rhetorical denial of his own anti-democratic instincts that a historian noted “echoed a classic technique of past fascist leaders.”

Like so much of Trump’s flirtation with autocracy, the fist pump hides its darkest intentions behind plausible deniability: If athletes, musicians, and kids can lift or waggle their fists in excitement, why can’t the president, or his fans? And isn’t the raised fist also the symbol of Black Power and leftist solidarity? In late June, Trump retweeted a video of a fist-pumping supporter in Florida shouting “white power!” The White House claimed the president had not heard the slogan but remained impressed by the “tremendous enthusiasm” on display.

Even if the fist’s ideology is gloved, it is an obvious articulation of Trump’s constant need to assert his energy and dominance, not just to us but to himself. It’s a flash of power posing, of “gestural metonymy”: A fist is powerful, therefore forming a fist imbues you with power. The earliest photos I’ve seen of the Trump fist pump are from the 1990 opening of his Taj Mahal casino in Atlantic City. In them, he stands next to a giant magic lamp, like he’s just had his wishes fulfilled with the erection of another tower with his name on it. (If you think all this armchair psychologizing is, um, getting out of hand, let me just add that this is a man who was so psyched out by Spy magazine mocking his allegedly short fingers in the ’90s that he was compelled to announce the correlation between the size of his totally-not-tiny paws and his penis during a primary debate in 2016.)

Coming from a master of branding boondoggles, Trump’s fist is easy to dismiss as more ironic than iron, a slight of hand distracting attention from a flawed product. (After Trump went bankrupt, the Taj would eventually be sold off for 4 percent of its original value.) Yet as with so much of Trump’s behavior, the fist pump is no less terrifying for its brazen dumbness. No doubt it will provide one of the final images of his presidency—a valedictory, ham-fisted attempt to brandish his grip on our democracy even as he walks away from the carnage.