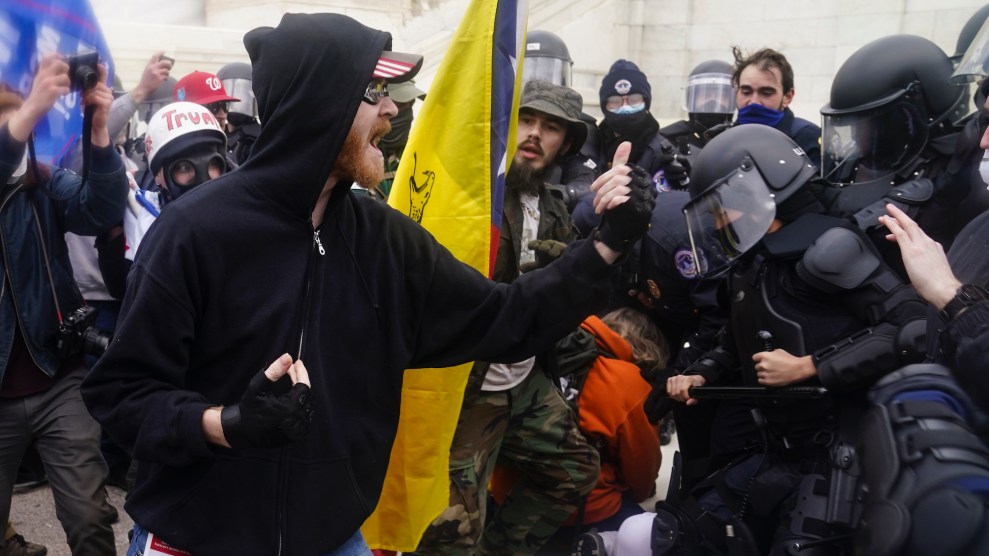 Trump supporters try to break through a police barrier on Wednesday at the Capitol.John Minchillo/AP

In June 2018, US Capitol Police arrested nearly 600 women peacefully protesting President Donald Trump’s family separation and immigration detention policies. On Wednesday, Capitol Police arrested 14 people in response to a violent assault on the Capitol that left a member of the mob and a police officer dead. The overwhelming majority of right-wing extremists who took over the Capitol for the first time since the War of 1812 walked free.

The June 2018 family separation protest was one of at least 35 days since 2016 during which Capitol Police arrested more demonstrators than they did insurgents on Wednesday, according to press releases and statements from the Capitol Police. Officers arrested more than 3,600 people on those 35 days, or about 260 times as many people as they did during the attack on the Capitol.

Newly elected Rep. Jamaal Bowman (D-N.Y.) is drafting legislation that will call for a commission to investigate whether members of the Capitol Police have direct or indirect ties to white nationalists and their sympathizers. “It’s critical when you look at the disparity in terms of how the Capitol Police responded to the insurrection on Wednesday, versus how they responded to—not just [Black Lives Matter] protesters this summer, but other people of color, and people who are disabled, historically,” Bowman told my colleague Kara Voght.

The Capitol Police’s mass arrests of demonstrators overwhelmingly impacted people supporting progressive causes. Over eight days in 2016, Capitol Police arrested about 1,240 people protesting the influence of money in politics and Congress’ failure to do anything about it. In July 2017, they arrested nearly 400 people fighting Republicans’ attempt to repeal the Affordable Care Act. In September 2018, officers arrested another roughly 400 people who were protesting Brett Kavanaugh’s nomination to the Supreme Court.

Below is a list of the nearly three dozens days in recent years that led to more arrests than Wednesday’s assault.

April 11, 2016: More than 400 arrests in response to the “Democracy Spring” protests against the influence of money in politics and the lack of action by Congress to counteract it.

June 22, 2017: 43 disability rights activists arrested while protesting Republicans’ efforts to eliminate the Affordable Care Act, which was expected to cause more than 20 million people to lose their health insurance.

A horrific metaphor for Trumpcare: this disabled woman literally being ripped from her wheelchair. #StopTrumpcare pic.twitter.com/F5kmz8rnCv

June 28, 2017: 40 people arrested during protests against the Obamacare repeal.

July 10, 2017: 80 people arrested during protests in support of the Affordable Care Act.

ADAPT activists being taken out one by one by Capitol Police, being greeted by huge applause as they go pic.twitter.com/EJddxpIi2Q

September 25, 2017: 181 people arrested protesting a last-ditch effort by the GOP to eliminate keys parts of Obamacare.

January 17, 2018: 82 people arrested during a protest led by Jewish activists and clergy members in support of protections for undocumented immigrants who came to the country as children.

Plastic cuffs placed around Jewish protesters calling for action on DACA
as they sing “We Shall Not Be Moved” on Capitol Hill. https://t.co/9Bl5ZwPXmn pic.twitter.com/M0rNuQXBEA

March 5, 2018: 87 people arrested after protesting in support of a path to citizenship for undocumented immigrants who came to the country as children. The Trump administration had moved to end the Obama-era program that provides so-called Dreamers with temporary work permits and protection from deportation.

September 27, 2018: 57 anti-Kavanaugh protesters arrested the day before his nomination is advanced by the Senate Judiciary Committee.

December 10, 2018: 138 members of the Sunrise Movement, a youth-led organization fighting to end the climate crisis, arrested protesting in support of the Green New Deal.

February 14, 2019: 19 people arrested during separate protests in support of gun control and in opposition to a West Virginia factory project.

A fraction of the police presence ready to arrest Sunrise activists protesting in McConnell’s office pic.twitter.com/XHH8N71Ppr

May 21, 2019: 27 people arrested during three incidents, according the Capitol Police’s summary of weekly arrests.

July 9, 2019: 18 people affiliated with the Jewish group Never Again Action arrested during a protest of the Trump administration’s treatment of detained immigrants.

July 18, 2019: A 90-year-old nun and 69 others arrested while protesting the conditions faced by people detained at the US-Mexico border.

Massive number of police to arrest nuns and priests protesting ICE in D.C.

October 15, 2019: 18 people arrested protesting the record-low cap on refugee admissions set by the Trump administration. Each person represented 1,000 of the 18,000 refugees the administration said it would allow in that fiscal year, down from 110,000 at the end of the Obama administration.

January 29, 2020: 39 people arrested by Capitol Police for blocking entry to the Capitol Building during a demonstration.

Conservative activists here to support Barrett are chanting “law and order,” a common Trump refrain, as anti-Barrett protesters are led away by police, their hands bound behind their backs. #SCOTUS #DCProtests pic.twitter.com/FLPuq6WHo6

October 15, 2020: 26 people arrested outside the Supreme Court during the last day of Barrett’s confirmation hearings.

January 6, 2021: 14 people arrested by Capitol Police during a violent attack on US Capitol that forced the vice president and legislators to evacuate.