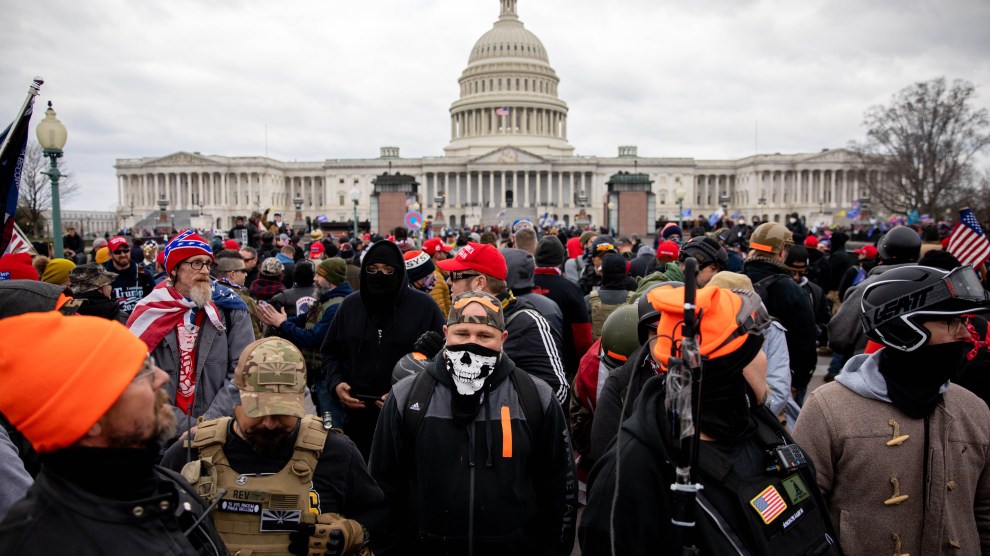 Even before the riots on Capitol Hill, extremist researchers were worried. At last Wednesday’s rally, rank-and-file supporters of President Donald Trump planned to mingle with the most explicit neo-fascists and white supremacists in his movement over chants of “stop the steal.” Beyond the violence that could, and did, play out at the Capitol—a catastrophic ransacking that led to five deaths—there was the potential of a long-lasting effect: more radicalization. An “open acceptance” of white nationalism, worried Michael E. Hayden, a senior investigative reporter at the Southern Poverty Law Center who focuses on hate and extremism, could allow hard-right extremists groups to convert more mainstream Republicans.

That fear, and dynamic, is already starting to materialize in extremist Telegram chats where membership has spiked in the last several days. Telegram is a messaging app that allows users to send encrypted secure chats user to user, and follow open chat groups (like a public group text). Fueled by the death of Parler, the social media site booted from app stores and Amazon’s web servers, chats on Telegram for white nationalists have grown, as users attempt to win over MAGA “stop the steal” supporters.

On Sunday, Megan Squire, a computer science professor at Elon University who studies online extremism, noticed that a Proud Boys–organized Telegram channel had amassed 6,000 new followers in four hours. As of Monday afternoon, that group had grown by nearly 12,000 followers since the insurrection.

It wasn’t the only site with a new influx of followers. Other Proud Boys channels reviewed by Mother Jones on the platform had also received thousands of new followers in the wake of Parler’s ban. This could have been foreseen: Telegram chats were run simultaneously with Parler, as a hedge in the event of the site’s ban. “This infrastructure was put in place, kinda for this exact reason,” said Ben Decker, who runs the media and tech investigations consultancy Memetica.

“There has been a small to moderate influx over the weekend as some of the QAnon influencers have made their way to Telegram and created their channels to stream their content as well as chats to communicate with their followers,” said Marc-André Argentino, a PhD candidate at Concordia University who tracks extremism online. “Telegram appears to be where some of the influencers are going to make their home.”

On Telegram, white nationalists users are “talking about how this is a great opportunity to save the white race and show these newcomers that these violent extremists were right all along,” said Argentino. He caveated that while the initial spike is concerning, it’s still too early to tell if the new numbers on Telegram will actually translate to a slew of new white supremacists, from relatively less extreme groups like Qanon.

In some Proud Boys groups, that mission is clear. “Parler being shut down has sent tens of thousands (or more) of people to telegram. All of them are seeking refuge and looking for answers since their Q-bullshit lied to them,” read a post. “Now is our opportunity to grab them by the hand and lead them toward ideological truth. Join their normie chats and show them love and unity.”

On Monday morning, a Telegram post noted that Parler’s ban was an opportunity to recruit new members by pushing “the most extreme talking points that they already have in their head thanks to Trump.” The post linked to large, less radical right-wing pro-Trump and pro-QAnon Telegram channels to recruit from.

Telegram as a whole appears to have received a bump from Parler’s ban (but this could be muddied by, too, by WhatsApp’s new data collection policies that have spurred downloads of more secure chat apps). As of Monday afternoon, it was the second most downloaded free app in the Apple App Store. Parler had previously shot up the most downloaded app charts prior to its ban.

Apple and Google have the ability to stop this, at least to a degree. Many of Telegram’s users access the app through versions downloaded on their app stores, which have to meet their terms of service. In at least one case, Apple has halted users’ ability to download the app. Last year, ahead of the pro-gun rally that extremists were expected to attend, Telegram shut down access in its Apple apps to several white supremacist and neo-nazi channels that Mother Jones had sent to Apple days prior. Neither company has appeared to do much since then.

There are a number of reasons that extremist wings of the hard-right have been able to bolster their numbers—most of them rooted in how we’ve seen extremist groups rise before in the United States. Technology companies have exacerbated these conditions, giving space to blossoming extremist groups ranging from outright neo-nazis to comparatively mild QAnon supporters. The mass deplatforming of Trump was seen as an acknowledgment of the power of the networks. But it ends up being incomplete when they shuffle the problem under the metaphorical rug of smaller, less scrutinized platforms.

“Following a deplatforming we see the networks are damaged in numbers when they relocate to other platforms. But they are not destroyed,” Megan Squire told me. “The tech companies should work together in this, but they usually do not. Company A will wash their hands of it and ignore the impact on Company B. Company B will often pride themselves on ‘winning’ the customers from Company A. And so on.”