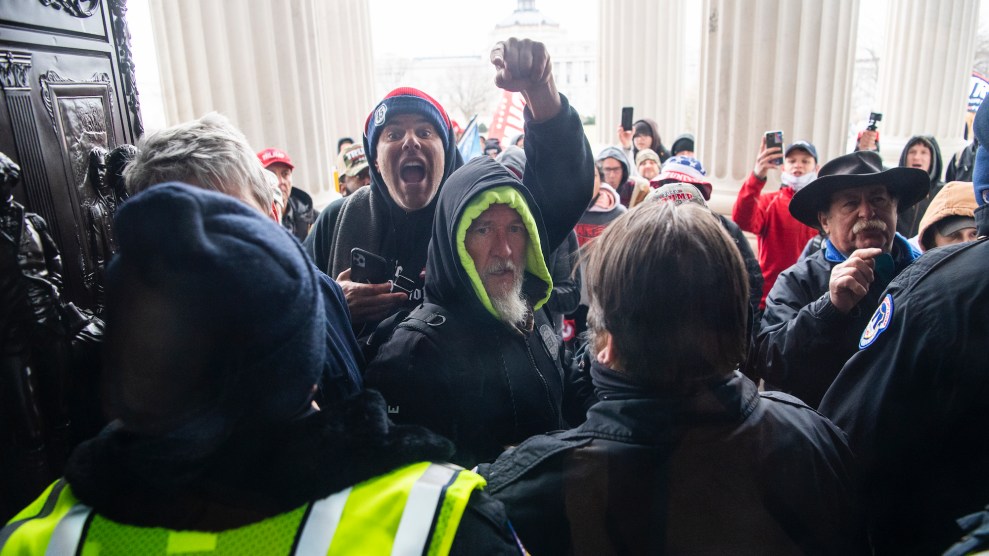 Things could have turned out very differently for Rep. Karen Bass (D-Calif.) if she hadn’t taken a Zoom call in her office last Wednesday afternoon. The California representative had been on the House floor listening to debate over the counting of the Electoral College vote when she excused herself, just as a violent mob of insurrections, egged on by President Trump, began swarming the Capitol.

Bass watched the scene from her office window as she spoke with Capitol Police. An officer told her rioters had begun to tear up the stage that had been set for Joe Biden’s inauguration and asked her to shelter in place. Unlike many of her colleagues, Bass didn’t fear for her life—though she felt fortunate she hadn’t run into the insurrectionists on her walk. Instead, she was consumed with rage. Law enforcement stood at the top of the building’s steps with their automatic rifles—why, Bass wondered, weren’t they using them? “They just allowed them to come in and tear up the Capitol,” Bass says.

Police didn’t use such a soft touch when they deployed tear gas, pepper bombs, and rubber bullets on a smaller, peaceful crowd of Black Lives Matter protestors gathered by the White House last June. Back then, Trump sent “every branch of the military” to control Black bodies, Bass scoffed, “but armed white people in full military gear with bombs and weapons” received little care.

“What happened on January 6 stood as a big testament to the fact that police reform is needed in this country.”

Then there was the matter of cops themselves: One Capitol Police officer took a selfie with a rioter. Up to 20 of his colleagues are under investigation for showing similar sympathies with the violent throng. Some off-duty officers had joined the mob, flashing their badges as they entered the building. (Of course, not every cop protecting the Capitol that day subscribes to the insurrectionists’ hateful ideologies, and many fought valiantly against violence their managers had downplayed in the days leading up to attack. A number of last Wednesday’s heroic acts came from Black officers—including one who singularly faced down a raging throng and others who endured a barrage of racial epithets as they tried to minimize the attack.)

Some Democratic lawmakers and activists hope the emerging details reinvigorate a conversation Congress began last summer, one that surfaced after a white police officer murdered George Floyd. Back then, they had demanded accountability for Floyd and countless others who had lost their lives at the hands of racist police officers, drawing connections between white supremacy and the actions of officers who endangered Black lives. Last Wednesday, the nexus between white nationalism and policing played out on one of America’s most-watched stages, in front of the nation’s lawmakers. And that, these lawmakers and activists hope, underscores the need for Congress to pass police reform laws.

“I’m very hopeful that people will hear the cry that African Americans have made for generations, which is it is not unusual for police to be involved in white supremacist activities,” Bass, the lead author on the House’s police reform bill, tells me.

“What happened on January 6 stood as a big testament to the fact that police reform is needed in this country,” Rep. Hank Johnson (D-Ga.) tells me. It was a “race mob” that stormed the Capitol, Johnson tells me, one inspired by Donald Trump, whose slogan “’Make America Great Again’ is code for ‘Make America White Again.’” And the danger that mob posed wasn’t taken seriously, even once rioters began to breach the barricades separating them from lawmakers. “When they got to the Capitol, they were met by law enforcement that, to a large extent, agree with their views,” Johnson says.

“Because they have such blinders on the true nature of domestic terrorism and white supremacy, they put our democracy at risk,” Derrick Johnson, president of the NAACP, tells me. “Race is no longer just a social construct. It is a matter of massive national security.”

That lawmakers were not adequately protected—and that some law enforcement joined the crowd—gave them a front-row seat to the everyday experiences of Black Americans, says Maurice Mitchell, president of the Working Families Party, a progressive organization that has advocated for police reform. “This is no longer anecdotal or the hyperbole of overzealous activists,” Mitchell tells me. “And now that all of those Members [of Congress] have experienced it, they can’t deny it. Now the question is, what are they going to do about it?”

Racial disparities exist “in every step of the criminal justice process,” from “who gets arrested to who police use force against,” Michael German, a former FBI agent and fellow at the Brennan Center for Justice, told my colleague Samantha Michaels. And while those tendencies are often chalked up to implicit or structural bias, there’s a lot of explicit bias that drives that behavior. German says the FBI regularly reminds agents who are investigating white nationalist activities to avoid collaborating too heavily with police, since the subjects of those investigations will often have active ties to law enforcement.

“Race is no longer just a social construct. It is a matter of massive national security.”

The House passed the George Floyd Justice in Policing Act last June, a sweeping set of police reforms aimed at improving police accountability, increasing transparency into officer misconduct, and tightening criteria on the use of force. Cynthia Roseberry, deputy director of policy at the American Civil Liberties Union, tells me a key line item in the bill is ending qualified immunity, a doctrine that shields members of law enforcement from being held legally responsible for conduct on the job. “Imagine that you feel that you can publicly support people who are breaking the law and threatening democracy without retribution,” Roseberry says of officers who sided with the mob. “It has to be the underlying culture of qualified immunity, right? That this is not only permissible and allowed, but I won’t be punished for it.”

The House bill would provide grants to states attorneys general to conduct investigations into patterns of misconduct or excessive use of force, but some lawmakers and activists are pressing for more. Johnson, the NAACP president, says police reform should include periodic reviews to make sure officers haven’t been radicalized into white supremacist or domestic terrorist ideologies. Rep. Jamaal Bowman (D-N.Y.) has introduced a resolution to form a commission to investigate whether any members of Capitol Police had ties to white nationalist groups or those sympathetic to last week’s insurrection.

Activists had worried about that Democrats had lost their will to take up police reform after the November elections, when the party’s losses in House and Senate races led moderate Democrats to blame the issue for hampering their electoral prospects. In a call with her Democratic House colleagues days after the election, Rep. Abigail Spanberger (D-Va.) chastised her progressive colleagues for their calls to “defund the police,” a shorthand activists use to describe their desire to cut police budgets and invest in social services. But not all complaints were over semantics: Rep. Bill Pascrell (D-N.J.) said voting to end qualified immunity, a line item in the House’s police reform bill, forced him to “walk the plank” in his reelection, the Intercept reported.

But the Senate runoff elections in Georgia, Mitchell of the Working Families Party argues, changed the political calculus. Republicans tried to pin Sen.-elect Raphael Warnock (D-Ga.) as a radical Black preacher who championed “defund the police.” Warnock not only won, but outperformed fellow Sen.-elect Jon Ossoff (D-Ga.) in every county. That fact, in addition to lawmakers’ traumatic experiences at the Capitol, “creates a new opportunity for police dramatic police reform,” Mitchell says. “The police need to be purged of white supremacy.”