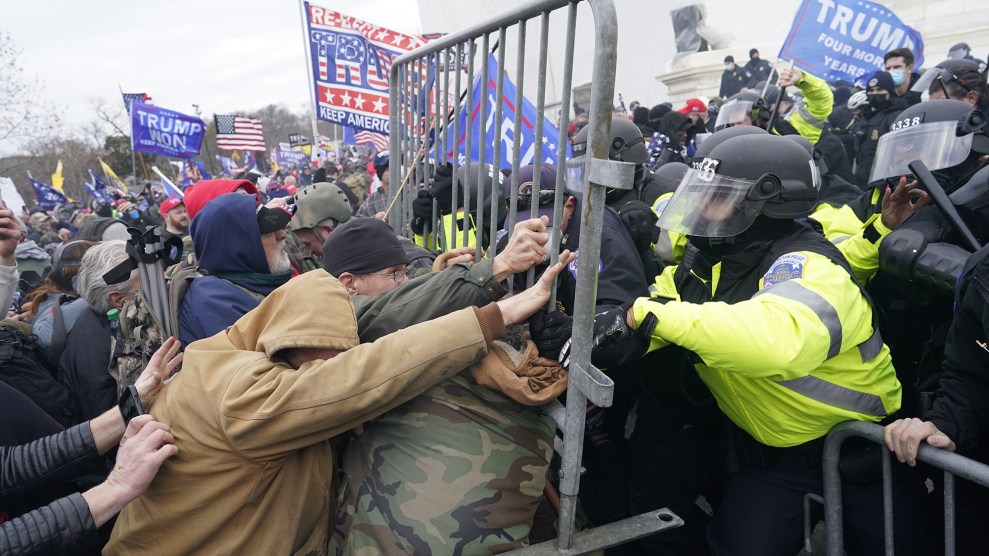 “No one gets out alive, not today!” Those were the words a man waving a massive Trump 2020 flag shouted just as a sea of rabid, belligerent protesters-turned-terrorists stormed the outer barriers of the US Capitol from the west side of the grounds.

It didn’t take long for the mob to bust through the rest of the barriers meagerly installed outside the Capitol Building. Each time, a line of US Capitol Police failed to push the protesters back with tear gas and rubber bullets. And then the unthinkable happened: The right-wing mob, incensed and motivated after Trump egged them on in a speech minutes earlier outside the White House grounds, penetrated the police barriers and broke into the Capitol.

It happened just as the Senate was debating certification of the Electoral College votes to formally declare Joe Biden the next president, causing an evacuation and lockdown of the House and Senate chambers. Protesters defaced the precious and historical interiors. Capitol Police deployed tear gas. A woman was shot inside the building and has now reportedly died.

Outside the west side of the Capitol, meanwhile, everyone knew what was happening. “It’s our house,” members of the pro-Trump mob yelled to each other as they streamed into the Capitol. “We’re going in,” one man yelled. The crowd packed in around the platform erected for Joe Biden’s inauguration. It didn’t take long before protesters were literally climbing up the walls around the inner balcony of the Capitol, with those already up there waving Trump, Gadsden, and Confederate flags high and wide.

Around 1:15 p.m., detonations began as Capitol Police tried to push the crowd back with what seemed to be concussion grenades. Smoke rose over the throng. Some of those watching seemed to think it was fireworks, and cheered. Many moved closer. Members of the mob encouraged others to head to the other side of the Capitol, where they believed they could gain entry. A blond woman in a blue New England Patriots hat told others, they should try the other side because “Alex Jones just told us to.” “Go to the front,” a man yelled. Hundreds complied. Among the mob, there was little question that breaching the Capitol was Trump’s will. But some were concerned that they were being misled by an Antifa fifth column.

All throughout the day, the pro-Trump protesters, who started out at a rally on the other side of the National Mall, on the White House Ellipse, were gearing up for this moment. As the president’s most loyal followers—including Rep. Mo Brooks, Don Trump Jr., Kimberly Guilfoyle, Rudy Giuliani—and even Trump himself—spoke to protesters, many were gearing people up to take over the US Capitol. As Trump was speaking to the crowd, a large group of Proud Boys marched in formation straight through the National Mall to the Capitol Building, stopping every hundred yards or so to make their intent known. “After they got Enrique [Tarrio, the Proud Boys leader who was arrested ahead of the rally], we’re going to let this fucking city know we fucking exist!” one member shouted over a bullhorn.

An hour later, members of the Proud Boys were among the first people who breached the first barrier outside the Capitol.