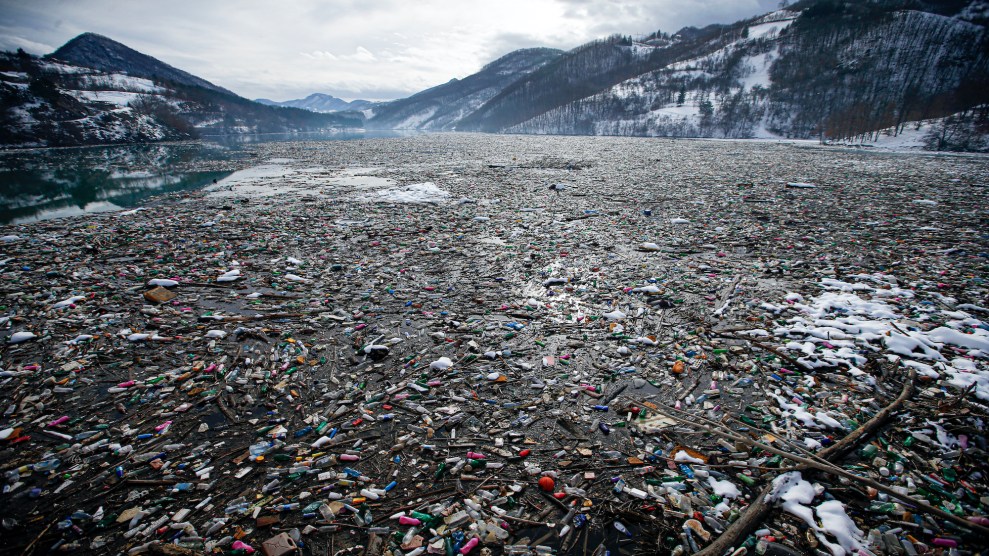 Humanity is waging a “senseless and suicidal” war on nature that is causing human suffering and enormous economic losses while accelerating the destruction of life on Earth, the UN secretary-general, António Guterres, has said.

Guterres’s starkest warning to date came at the launch of a UN report setting out the triple emergency the world is in: the climate crisis, the devastation of wildlife and nature, and the pollution that causes many millions of early deaths every year.

Making peace with nature was the defining task of the coming decades, he said, and the key to a prosperous and sustainable future for all people. The report combines recent major UN assessments with the latest research and the solutions available, representing an authoritative scientific blueprint of how to repair the planet.

The report says societies and economies must be transformed by policies such as replacing GDP as an economic measure with one that reflects the true value of nature, as recommended this month by a study commissioned by the UK Treasury.

Carbon emissions need to be taxed, and trillions of dollars of “perverse” subsidies for fossil fuels and destructive farming must be diverted to green energy and food production, the report says. As well as systemic changes, people in rich nations can act too, it says, by cutting meat consumption and wasting less energy and water.

“Humanity is waging war on nature. This is senseless and suicidal,” said Guterres. “The consequences of our recklessness are already apparent in human suffering, towering economic losses, and the accelerating erosion of life on Earth.”

The triple emergency threatened our viability as a species, he said. But ending the war would not mean poorer living standards or an end to poverty reduction. “On the contrary, making peace with nature, securing its health and building on the critical and undervalued benefits that it provides are key to a prosperous and sustainable future for all.”

“This report provides the bedrock for hope,” he said. “It makes clear our war on nature has left the planet broken. But it also guides us to a safer place by providing a peace plan and a postwar rebuilding programme.”

Inger Andersen, the head of the UN Environment Programme (Unep), said: “We need to look no further than the global pandemic caused by Covid-19, a disease transmitted from animals to humans, to know that the finely tuned system of the natural world has been disrupted.” Unep and the World Health Organization have said the root cause of pandemics is the destruction of the natural world, with worse outbreaks to come unless action is taken.

The report says the fivefold growth of the global economy in the last 50 years was largely fuelled by a huge increase in the extraction of fossil fuels and other resources, and has come at massive cost to the environment. The world population has doubled since 1970 and while average prosperity has also doubled, 1.3 billion people remain in poverty and 700 million are hungry.

It says current measures to tackle the environmental crises are far short of what is needed: the world remains on track for catastrophic warming of 3C above pre-industrial levels, a million species face extinction and 90% of people live with dirty air.

“We use three-quarters of the land and two-thirds of the oceans—we are completely dominating the Earth,” said Ivar Baste of the Norwegian Environment Agency, a lead author of the report.

Prof Sir Robert Watson, who has led UN scientific assessments on climate and biodiversity and is the other lead author of the report, said: “We have got a triple emergency and these three issues are all interrelated and have to be dealt with together. They’re no longer just environmental issues—they are economic issues, development issues, security issues, social, moral and ethical issues.

“Of all the things we have to do, we have to really rethink our economic and financial systems. Fundamentally, GDP doesn’t take nature into account. We need to get rid of these perverse subsidies, they are $5-7tn a year. If you could move some of these towards low-carbon technology and investing in nature, then the money is there.”

This meant taking on companies and countries with vested interests in fossil fuels, he said: “There are a lot of people that really like these perverse subsidies. They love the status quo. So governments have to have the guts to act.”

Financial institutions could play a huge role, Watson said, by ending funding for fossil fuels, the razing of forests and large-scale monoculture agriculture. Companies should act too, he said: “Proactive companies see that if they can be sustainable, they can be first movers and make a profit. But in some cases, regulation will almost certainly be needed for those companies that don’t care.”

Pollution was included in the report because despite improvements in some wealthy nations, toxic air, water, soils and workplaces cause at least 9 million deaths a year, one in six of all deaths. “This is still a huge issue,” said Baste.

The world’s nations will gather at two crucial UN summits in 2021 on the climate and biodiversity crises. “We know we failed miserably on the biodiversity targets [set in 2010],” said Watson. “I’ll be very disappointed if at these summits all they talk about is targets and goals. They’ve got to talk about actions—that’s really what’s crucial.”