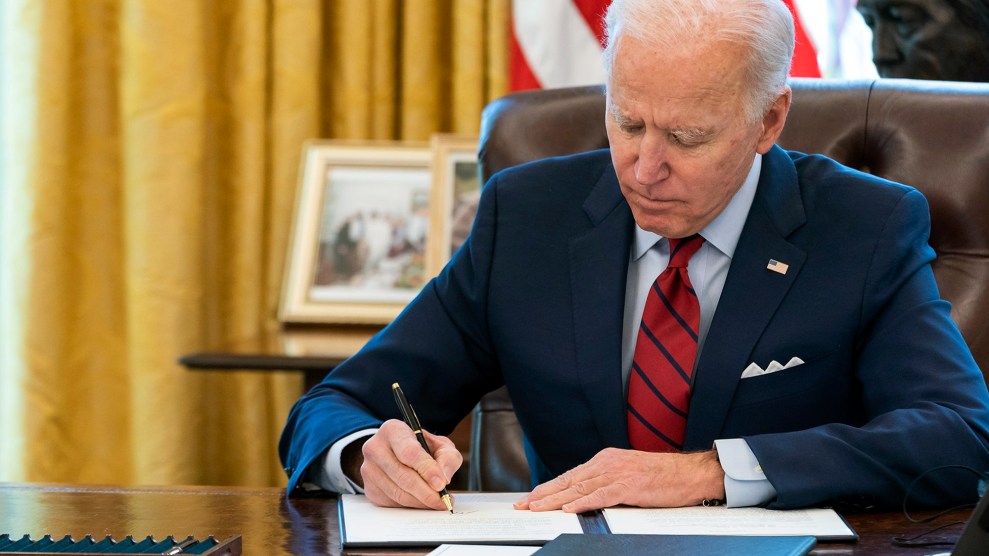 After four long years of the crisis being officially ignored, stopping climate change is back on the White House agenda.

President Joe Biden’s first two weeks in office have been filled with a flurry of executive orders that aim to put the United States back on course to cut carbon emissions and resume a place of global leadership on climate action. They present a stark contrast to the first hundred days of then President Donald Trump’s term, when he immediately set to work unraveling the Obama administration’s environmental policies, starting with the appointment of Scott Pruitt, a known climate change skeptic, to head up the Environmental Protection Agency (EPA).

“He appointed people who were the very antithesis to the agencies that they led,” Rebecca Leber, Mother Jones’ environmental politics and policy reporter, tells Jamilah King on the Mother Jones Podcast. “President [Trump] himself really promoted this idea of climate denial and anti-science theory.”

President Biden came into office with the most ambitious climate change plans of any presidential administration to date. He not only promised to reverse the Trump administration’s regressive climate policies, including regulatory rollbacks and a withdrawal from the Paris Agreement, but he was committed to push the United States farther on climate change action than it has ever gone before. He named climate change action as a top priority, right alongside the coronavirus pandemic, the economy, and racial justice.

“That was the first time we had a president enter office saying climate was that high of an ambition,” says Leber. “[There] has been a remarkable amount of movement on climate change in the first couple of weeks.”

In his first few days in office, President Biden signed a series of executive orders to get the Untied States back into the Paris agreement, to pause the lease of fossil fuel on public lands, and to establish environmental justice working groups across federal government agencies, not just the EPA. He issued an executive order to set up a Civilian Climate Corps. He promised to get the United States on track to conserve 30 percent of lands and oceans by 2030. He directed federal agencies to eliminate subsidies to Big Oil and invest in clean energy solutions.

“Any one of these items on their own would be huge,” says Leber. “But the fact that we’re seeing them all together is even bigger.”

President Biden’s leadership on climate change already seems to be influencing industry. General Motors (GM), one of the largest auto manufacturers in the United States, announced last week that it would release 30 new electric car models by 2025 and aims to switch over entirely to electric vehicle production by 2035. This is more notable in light of GM’s opposite position under President Trump, when the company joined in the fought against higher fuel efficiency standards in California.

“This is a huge deal because transportation is almost a third of our US greenhouse gas emissions,” says Leber, noting that policy could could have a huge impact. “Federal policy really matters for setting a floor for industry and for automakers.”