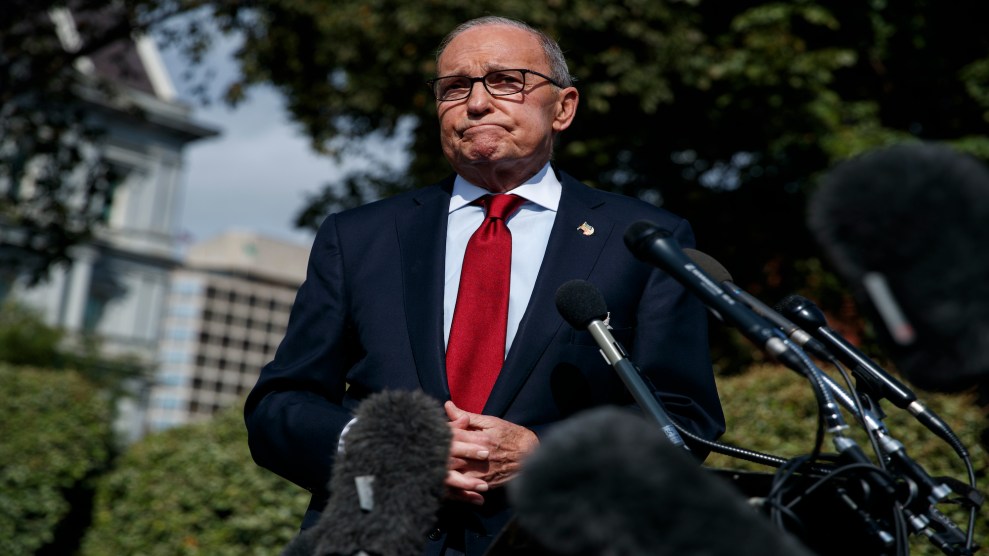 Ramping up fossil fuel production and shredding pollution rules, as the Trump administration did for four years, largely defies economic and scientific logic in an era of costly climate disasters. But Larry Kudlow, who was director of the National Economic Council for part of that time, may have indicated Wednesday that the administration saw its policies on fossil fuels through another lens: culture.

During an interview with Fox Business star Maria Bartiromo, Kudlow dismissed President Joe Biden as an ideologue whose approach to climate change threatens to “wreck the whole energy sector.”

It was only a split second, possibly even an unintentional slip of the tongue. But the idea of defining fossil fuels as a “cultural issue” gets at something that typically goes unacknowledged in policy debates over how to deal with the industry most responsible for destabilizing the planet’s ecosystems. For conservatives, fossil fuel fights are just another front in the U.S. culture war that’s been waged for decades over issues like same-sex marriage and abortion.

On the other hand, the economic logic of pumping and burning more oil, gas and coal is difficult to square.

And that only accounts for fossil fuels’ effect on global temperatures. Tiny particles from fossil fuels that pollute the air kill as many as 4.5 million people worldwide each year, and result in global economic costs totaling roughly $8 billion per day, a study published last year by the Centre for Research on Energy and Clean Air found.

Then there’s the reality that fossil fuel producers rely heavily on debt and generous government subsidies to turn profits. About 50% of new oil drilling in the U.S. would be unprofitable without subsidies, according to a 2017 study in the peer-reviewed journal Nature Energy.

Over the past decade, cheap loans from Wall Street investors boosted the popularity of hydraulic fracturing, the drilling technique known as fracking—thereby flooding the market with supply and reducing the price of oil and gas. The sector’s success was its own undoing: Between 2012 and 2017, the 30 largest shale producers lost more than $50 billion, according to a Wall Street Journal estimate. From 2015 to 2016, an eyebrow-raising 91% of all corporate debt defaults in the United States were in the oil and gas sector, the financial research firm Moody’s calculated in 2019.

Now that policymakers are starting to heed scientists’ calls to rapidly transition the global economy away from fossil fuels, even the mightiest companies are showing signs of financial atrophy. Exxon Mobil Corp., the Western world’s largest oil explorer, lost its place in the Dow Jones Industrial Average stock index last August as its debt, and its obstinate refusal to plan for a low-carbon future, repelled investors. This week, the company reported its first annual loss in at least 40 years.

If the adoption of renewable power and electric vehicles proves as swift as leaders in the U.S., Europe and East Asia now say they want it to be, new drilling projects—which can take decades to pay off—could become what financial experts call “stranded assets,” virtually worthless money pits that will never make a profit but may instead be costly to clean up.

What, then, explains the political power of fossil fuels? Hefty political donations and the long-term need for some supply of the fuels, albeit paired with some kind of technology to capture emissions, only tell part of the story. The industry, especially in the U.S., also serves as an avatar for a certain kind of cultural worldview, one that resonates with tough-guy masculinity and patriarchal families.

In 2011, a study in the peer-reviewed journal Global Environmental Change found that white males were overrepresented among people who denied the reality of climate change. Researchers attributed the phenomenon to a desire to “protect their cultural identity.”

“Perhaps white males see less risk in the world because they create, manage, control, and benefit from so much of it,” the study’s authors wrote. “Perhaps women and nonwhite men see the world as more dangerous because in many ways they are more vulnerable, because they benefit less from many of its technologies and institutions, and because they have less power and control.”

In 2014, researchers in Sweden found that climate denial was “intertwined with a masculinity of industrial modernity that is on decline.” Those who defended the industries destabilizing the planet were trying “to save an industrial society” that men like them had built and dominated, argued the researchers, whose work appeared in Norma: International Journal for Masculinity Studies.

Reflecting on this growing body of social research, the climate writer Emily Atkin asked in a recent edition of her Heated newsletter: “Do you ever wonder what the planet might look like if men didn’t control the world?”

“I’m not talking about all cisgender men, or the entirety of the male gender,” she wrote. “Really, I’m just talking about people who believe that because they have penises, they are required to act in a traditionally, almost performatively masculine way—like ‘being strong’ and ‘never showing weakness’ and ‘not ordering sauvignon blanc.'”