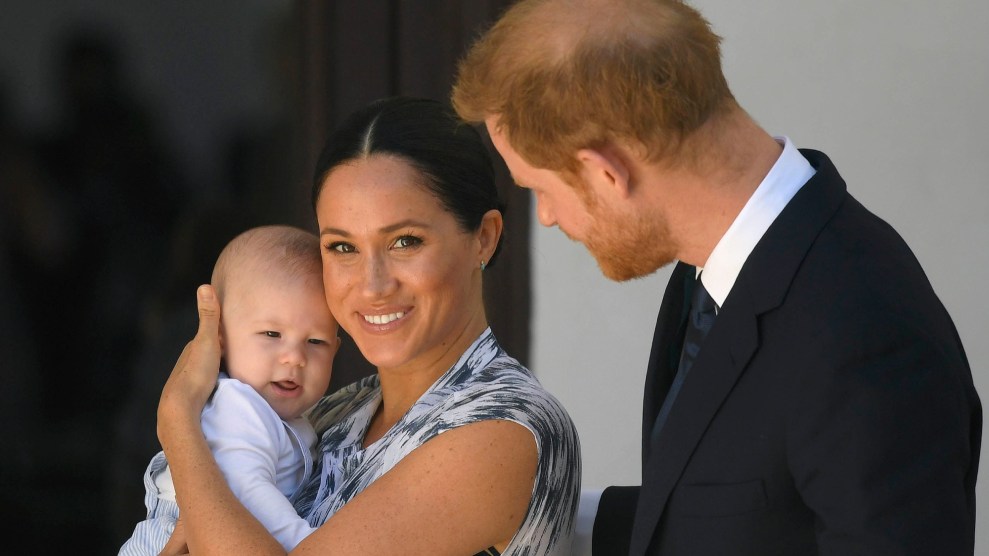 On Sunday night, Oprah Winfrey’s highly sought after interview with Meghan Markle and Prince Harry ran in a two-hour prime-time CBS television special. Last year, the royal couple, who have one son and a daughter on the way, had announced that they would be stepping back from their duties as senior members of the British Royal Family. During Oprah’s interview, it was revealed that the “Firm”—the Royal Family’s massive corporate entity—had decided to make that arrangement permanent. In effect, the Queen and the rest of the palace apparatus disowned the youngest son of Prince Charles and Lady Diana Spencer and his family. Since their 2018 wedding, Prince Harry and Megan have been the subject of innumerable, often racist, tabloid articles about Meghan’s intentions, her behavior, and the couple’s relationship to the monarchy.

Among the many revelations in the interview—including the bombshell that contrary to tabloid coverage, Prince William’s wife Kate Middleton made Meghan cry not the other way around—was this: Someone in the Royal Family, who was never identified, asked about their child’s skin tone. The not-so-subtle implication was that this person was worried Archie and the rest of their offspring would take after his Black mother.

I may have watched all four seasons of The Crown last year—I needed something to do during a pandemic—but my interest in the Royal Family has been fairly limited. So, on Sunday night, I opted to watch basketball instead. I figured that if anything really interesting happened, Twitter would let me know. And sure enough, it didn’t let me down; the bit about baby Archie’s skin tone caught my attention.

During the interview, Markle says that “concerns” were raised about how “dark” Archie’s skin would be.

“You’re not going to tell me who had that conversation?" Oprah asks after Meghan says there were concerns about her child's skin color

“I think that would be very damaging to them.” #OprahMeghanHarry pic.twitter.com/TGulbooO8P

Oprah responded with a brief pause followed by a bewildered and disgusted, “What?” Later in the interview, when Prince Harry joined the pair, she also asked him about the event, and he too refused to offer much more beyond the fact the event it had happened. Once more, Oprah’s incredulity was obvious. But the legendary television show host and interviewer, who was born into poverty in Mississippi in 1954, was probably not surprised by the racism—and neither was I.

This may come as a real disappointment to those who occasionally flood my inbox with accusations of “hating” white people, but I’m married to a white man. And despite the fact that we don’t have any children, I am intimately familiar with the random comments about the hypothetical skin tone of our hypothetical children. This is hardly a new story.

“Concerns” over Archie’s Blackness are rooted in long-standing sociological and historical classifications about race. In 20th century America, the one-drop rule was routinely applied to determine if you were Black or not—if you had even a single Black ancestor, a single drop of Black blood, you’re Black. (It all has the quality of Black blood weirdly contaminating white blood.) Then there is the “paper bag test” in which your skin tone is compared to the color of a brown paper bag. This was a colorist practice used by Black people to deny privileges to those with darker skin. Here’s how Henry Louis Gates Jr., a prominent Black historian at Harvard, described it in his book The Future Of Race. During his undergrad years at Yale in the late sixties, “Some of the brothers who came from New Orleans held a ‘bag party’. As a classmate explained it to me, a ‘bag party’ was a New Orleans custom wherein a brown paper bag was stuck on the door. Anyone darker than the bag was denied entrance.”

“A ‘bag party’ was a New Orleans custom wherein a brown paper bag was stuck on the door. Anyone darker than the bag was denied entrance.”

The belief that Black people could escape their own misfortune by passing as white has been a recurring literary and artistic theme, from Nella Larson’s 1929 novel Passing about a white-passing Black woman who escapes into white society, to Brit Bennett’s recent bestseller The Vanishing Half, in which Black teenage twin sisters become separated after one decides to pass as white and slip into a different world. The sociological implications of the one drop rule, of the paper bag test, and being light enough to pass are clear: The lighter the skin, the better.

Well before I entered into an interracial relationship, my proximity to whiteness was discussed. As a newborn baby, I had very light skin and thick dark hair—I’ve been told that someone jokingly (but also as a compliment) asked my mother if I was secretly Asian. (Unpacking how this would be a compliment to my Haitian parents is a whole different story.) Again, the implication was that I was much too cute to be Black. On the flip side, a relative of mine was born with dark skin and family members openly joked about how ugly she was for the first few weeks of her life.

Fast forward, three decades later to the night before I got married. Someone remarked that they hoped our children didn’t inherit my hair. I curtly responded that I liked my hair. Unfortunately for me, it wasn’t the first time I’ve heard people speculate about children I don’t have and Lord knows it wouldn’t be the last. I’ve been told by countless people of all races that our kids would be cuter than the average baby. I’ve had people muse about their hair texture, if I’d be disappointed if they looked like me or didn’t look like me, and also wouldn’t it be amazing if they inherited my husband’s blue eyes?

There’s a deep insecurity that comes from hoping a baby isn’t “too dark”—even if the child happens to have a British Prince for a father. The underlying theme of the racial discourse today (it turns out saying the n-word at work is bad!) is that whites are losing control of the narrative. If a Black woman can produce an heir to the British throne, what’s next? (In that case we know what’s next; the Prince gets fired.) But in a broader context, what is next? Full equality? Or even more aggressive assertions of white supremacy? Whether the Royal Family is fretting about baby Archie’s place in their white family portrait or white dynasty, or you’re telling your friends you hope their babies look as close to white as possible, you’re trafficking in the old narrative dominated by whiteness. Maybe you really do think our future kids will be beautiful. But when you tell me, “I sure hope your [hypothetical] baby has straight hair!” all I hear is “I sure hope your [hypothetical] baby isn’t Black like you.”