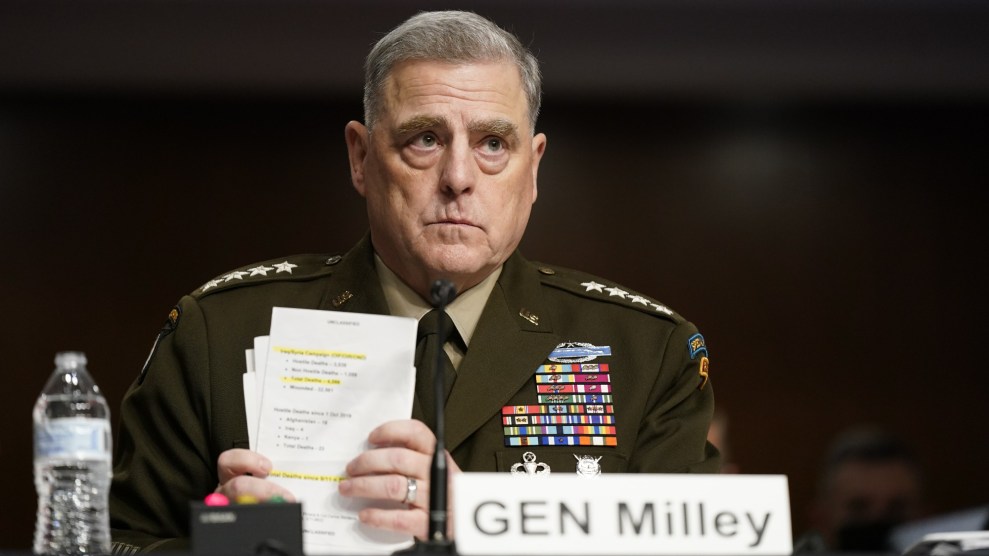 Gen. Mark Milley, speaking before Congress in a Tuesday hearing about Afghanistan, shed light on his much-reported calls with his Chinese counterpart before and after the 2020 election.

Milley, the chair of the Joint Chiefs of Staff, said Trump officials, including White House Chief of Staff Mark Meadows and Secretary of State Mike Pompeo, were aware of the calls, which Republicans have seized on as a reason to dismiss Milley.

“These military-to-military communications at the highest level are critical to the security of the United States in order to deconflict military actions, manage crises, and prevent war between great powers that are armed with the world’s most deadliest weapons,” Milley said.

The calls, which were first reported in Washington Post reporters Bob Woodward and Robert Costa’s book Peril, provoked Republican ire that Milley had improperly circumvented the chain of command. But Milley emphasized that he is “specifically directed to communicate with the Chinese by Department of Defense guidance” and his calls were conducted “with the knowledge and coordination of civilian oversight.”

The first call was prompted by Milley’s review of intelligence suggesting the Chinese believed the United States was preparing to attack. That belief, the authors write, was based on tensions over military exercises in the South China Sea, and deepened by Trump’s belligerent rhetoric toward China.

Milley was also pressed on a reported call he had with Speaker of the House Nancy Pelosi in January about Trump’s state of mind and the possibility of him launching a nuclear strike. At the time, Pelosi told Democratic lawmakers that her call was aimed at “preventing an unhinged president from using the nuclear codes.”

Milley had a slightly different recollection. “I explained to her that the president is the sole nuclear launch authority, and he doesn’t launch them alone, and that I am not qualified to determine the mental health of the president of the United States,” he said. “There are processes, protocols, and procedures in place, and I repeatedly assured her that there is no chance of an illegal, unauthorized, or accidental launch.”

The hearing also affirmed contemporaneous reporting that Joe Biden had overruled advice from his generals when ordering a withdrawal from Afghanistan and, before leaving office, Trump too had ordered an unconditional withdrawal.

Gen. Milley just testified that the Trump admin ordered withdrawal of all troops from Afghanistan by January 15, 2021 — against his recommendation.

"After further discussions regarding the risks associated with such a withdrawal, the order was rescinded."

Trump pursued a peace deal with the Taliban and spent the last few months of his presidency pushing to withdraw troops from Afghanistan, even tweeting that he’d like all troops there home before Christmas.

But in the aftermath of Biden’s decision to withdraw troops—and the subsequent return of the Taliban to power—Trump has tried to revise history, saying he would have pursued a “conditions-based withdrawal,” even though Milley testified that Trump wanted troops home before the end of his term.