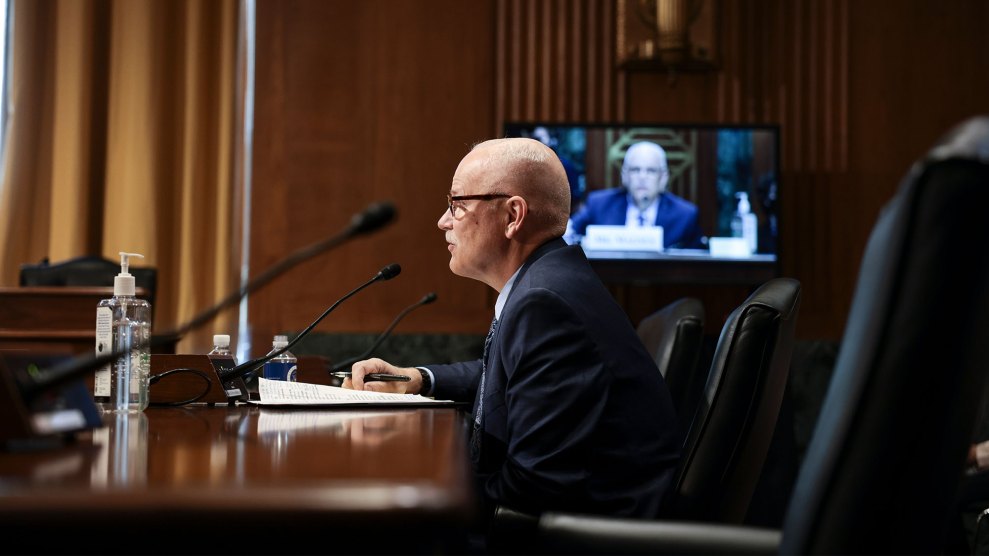 Chris Magnus testifies at a Senate Finance Committee hearing on his nomination to be the next US Customs and Border Protection Commissioner on Capitol Hill.Anna Moneymaker/Getty Images

While today’s confirmation hearing for President Joe Biden’s pick to lead Customs and Border Protection didn’t produce fireworks, it was notable in at least one aspect: The Biden administration is still firmly committed to the controversial Trump-era policy that has essentially closed the border to migrants and asylum seekers for almost two years.

“I think it’s absolutely imperative that we do everything possible to stop the spread of COVID.”

“As a paramedic for 10 years, public health has always been one of my top concerns, and because of that I think it’s absolutely imperative that we do everything possible to stop the spread of COVID,” Magnus said. Title 42, he concluded, “helps with this.”

This answer isn’t exactly a surprise—Magnus wants to get confirmed, and the Biden administration has hid behind the oh-its-a-public-health-policy-not-immigration-policy refrain to keep Title 42 in place for just about its entire tenure. Still, Magnus’ testimony was striking for someone who openly called Trump’s immigration policies dangerous and who was nominated by an administration with promises of more humane border policies.

Since the Trump administration invoked the obscure public health authority known as Title 42 back in March 2020, allowing border officials to quickly turn migrants back at the US-Mexico border on the grounds that they could spread the virus, it’s created something of a humanitarian disaster. Tens of thousands of individuals have been robbed of their legal right to petition asylum and have become more vulnerable to crime in Mexican border cities. Many people who are returned to Mexico quickly end up attempting to cross again, some multiple times. Each time more physically and emotionally drained, each time more desperate. This has led to more than 1 million expulsions since it was implemented. Recent data showed that only about 3,000 people who were processed were referred for asylum screenings.

Immigrant rights groups, humanitarian organizations, and physicians criticized the Trump administration for implementing the policy, and since Biden took office, have urged him to end it. Perhaps they expected that Biden’s more “humanitarian” approach would mean an end to the border closure for migrants, but even as the president has rescinded some of Trump’s cruel immigration policies, he made no public indication that he will revoke Title 42.

The report pointed out the “lack of epidemiological evidence for only banning this category of entrants to the United States.”

The nonprofit advocacy organization Physicians for Human Rights published a report over the summer titled “Neither Safety nor Health: How Title 42 Expulsions Harm Health and Violate Rights,” pointing out the “lack of epidemiological evidence for only banning this category of entrants to the United States while keeping the borders open to other travelers.” While government officials have said Title 42 is stopping the spread of COVID-19, the United States has kept land border crossings open to US citizens and some travelers without testing. Travel to and from Mexico by air hasn’t been affected. (Last week, the Biden administration announced it would begin lifting restrictions to non-essential travel at the land ports of entry—which might make it harder for it to use the pandemic as rationale for keeping Title 42 in place.)

My colleague Isabela Dias recently wrote about the cruel legacy of Title 42:

Several reports show the widespread harm inflicted on adults and families who had been expelled to Mexico without being given an opportunity to seek safety in the United States. As of mid-June, Human Rights First had documented 3,250 instances of extortion, kidnapping, and rape since President Biden took office. In May, Andrew Calderón and I analyzed years’ worth of sector-level data from Customs and Border Protection (CBP) on rescues and deaths along the Southern border. We learned that Title 42 is leading single adults—many of whom are Black or LGBTQ—to attempt repeated crossings through more dangerous routes, increasing their chances of needing to be rescued by Border Patrol agents, drowning in the Rio Grande, or dying in the desert.

Earlier this month, a high ranking State Department official resigned from his post, saying Biden’s continuation of Title 42 expulsions was “illegal and inhumane.” State Department legal adviser Harold Koh said the policy was “not worthy of this Administration I so strongly support.” He urged the administration “to do everything in your power to revise this policy… into one that this worthy of this Nation we love.”

And yet, there’s still no apparent movement from the powers that be—or the powers that are about to be. Magnus said that his bottom line is complying with the law “even as it changes, perhaps regarding Title 42, no matter what it is that the courts decide.” He added that he didn’t have enough information to comment on Biden’s humanitarian exclusions to Title 42 that apply to unaccompanied children and some families.

Magnus explained that his father was an immigrant from Norway, his mother the daughter of a German immigrant, and his husband immigrated from Hong Kong.

While he’s spent a career in law enforcement, he’s also a self-described progressive. Magnus has been the police chief in Tucson since 2016. Last year his department came under scrutiny after video showed a 27-year-old crying out for his grandmother in Spanish and saying he couldn’t breathe as police officers handcuffed and pinned him face down. Magnus said that if the officers involved in the death of Carlos Adrian Ingram-Lopez hadn’t resigned, he would’ve fired them; he also submitted his resignation to Tucson city officials after the incident, but the city manager and Democratic mayor rejected it, saying he had brought “forward-thinking” changes to the police department and was “exactly what we need in these difficult times.”

Before moving to Tucson, Magnus was the police chief in Richmond, California, for 10 years. There, he got national attention for joining a Black Lives Matter peaceful protest in 2014. He also faced backlash from the police union for wearing his uniform while holding a BLM sign.

In his opening testimony Tuesday, he said that as CBP Commissioner he would work to strike a balance between law enforcement and treating people humanely. “CBP is a key part of our immigration system that has welcomed so many immigrant families to our country, including my own,” Magnus said. He explained that his father was an immigrant from Norway, his mother the daughter of a German immigrant, and his husband immigrated from Hong Kong.

Magnus’ confirmation could come down to a party-line vote, with Vice President Kamala Harris breaking the tie. If confirmed, Magnus won’t be without major challenges. He’ll have to build a relationship with an agency 60 times larger than the Tucson Police Department—and one that is already largely skeptical of his leadership. His relationship with the Border Patrol Union has been troubled for years, and the union went after Magnus for publicly questioning the morals of law enforcement involved in separating migrant families in 2018. “Leave your personal political beliefs and your so-called ‘morals’ at home where they belong,” the union posted on Facebook in 2018. “Magnus does realize that coming into this country without using a designated port of entry is a crime…Why not just have everyone crash the border wherever they want?”

Only time will tell if he leaves his morals at home—though it won’t be much time. As I wrote recently, there’s the immediate issue of accountability for CBP agents who for years have acted cruelly and with impunity, most recently against Haitians in Del Rio. And, of course, the tricky issue of squaring a “humane” immigration policy with the very inhumane Title 42 might not be going anywhere anytime soon.