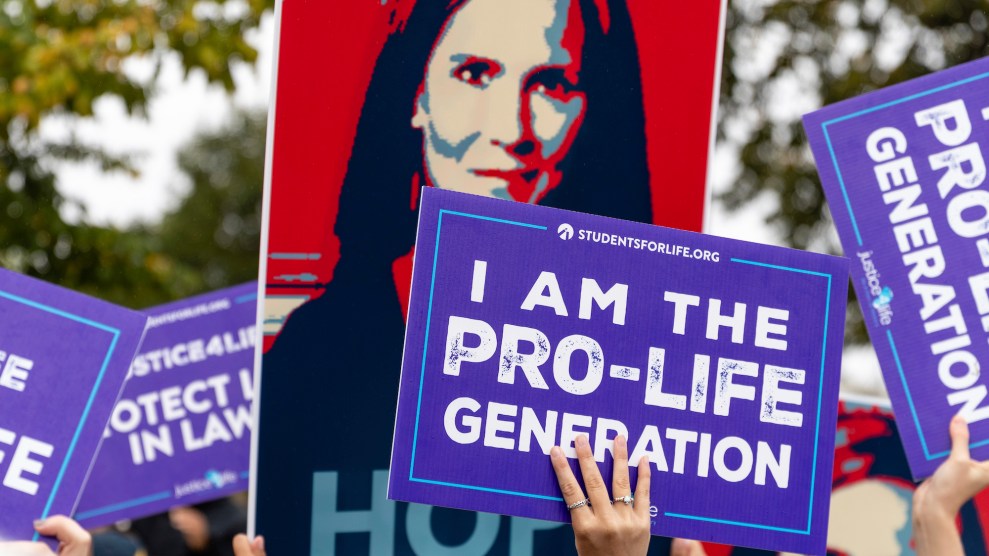 Members of Students for Life hold signs up in favor of the Senate confirming Amy Coney Barrett to the Supreme Court in October 2020. Paris Malone/Sipa via AP Images

The entire pro-life movement is eagerly awaiting the upcoming December 1 Supreme Court arguments in Dobbs v. Jackson Women’s Health Organization, a case that would provide the high court its next opportunity to overturn Roe v. Wade and allow states to ban abortion all together. But Students for Life is one of the few organizations that claims to actually be planning for a post-Roe world.

Covering 12 cities, the bus tour and associated anti-abortion rallies feature a live ultrasound to “illustrate the humanity of people not yet born,” according to a press release.

Students for Life was created 15 years ago as a campus-based movement to energize a new generation of anti-abortion activists. Since then, it’s been a staple of anti-abortion protests across the country. On November 6, in Jackson, Mississippi, the group kicked off the “See Me Now Bus Tour” that will culminate in a rally in DC on the day of the oral arguments in Dobbs. Covering 12 cities, the bus tour and associated anti-abortion rallies feature a live ultrasound to “illustrate the humanity of people not yet born,” according to a press release.

But their work is not just about rallying the public. The group’s founders have also assumed that in the not-so-distant future, the conservative Supreme Court will indeed help make abortion illegal in much of the country, and that it should plan accordingly. To that end, Students for Life has tried to deflect one of the biggest criticisms of the anti-abortion movement, which is that it doesn’t care what happens to babies, especially poor ones, once they are born, or to their mothers, whose numbers are likely to balloon if Roe goes down. Along with distributing the movement’s usual disinformation about abortion and breast cancer or the supposed dangers of “Plan B” emergency contraception, its campus chapters organize diaper drives for pregnant college students and raise some money for individual, struggling parents.

More recently, it launched “Abortion Free Cities” campaign, in which volunteers go door to door to hand out resource guides to people who might not be able to get abortions now (as in Texas), or in many more places in the post-Roe future. (In Texas, they’ve also distributed information on how to sue abortion providers under the state’s new bounty law that allows any citizen to win up to $10,000 for suing anyone they believe might have helped someone procure an abortion after six weeks of pregnancy.)

The group’s related online materials are almost comical in their uselessness. Students for Life flyers and lawn signs direct people to a website called StandingWithYou.com, which helpfully advises a woman facing an unplanned pregnancy to eat right, take prenatal vitamins, avoid alcohol, and use natural cleaning products. It also offers “post-abortion” grief counseling, but little information about how to, for instance, escape a domestic violence situation or get your stepfather prosecuted for rape. There’s no tutorial on how to access the albeit insufficient government safety net programs that might keep a pregnant woman out of the Christian homeless shelters and adoption facilities listed on the site as resources.

Under listings for food assistance in Texas, for instance, the website states, “no state resources found.” The resources offered for a state in which abortion rights have already been steeply curtailed include mostly a long catalog of entries for Christian crisis pregnancy centers, which do little more than offer pregnancy tests, ultrasounds, and in some cases, classes on natural family planning. The Trump administration diverted federal funding away from Planned Parenthood and into these sorts of clinics, which have multiplied, even as the number of people receiving genuine federally funded family planning services plummeted 61 percent. (You can read the Mother Jones investigation into these Christian clinics here.)

Last year, Students for Life also issued a “Blueprint for a post-Roe world,” which doesn’t sound much different from the anti-abortion movement’s agenda for the past 50 years. Much of it revolves around working to ban abortion in places where it might remain legal after Roe is overturned, and then promoting adoption and reforming the foster care system, which is likely to be overwhelmed in this future scenario.

Unsurprisingly, there’s scant little in it about the plight of unwanted children, or impoverished parents who might be forced to bear them. The plan pays lip service to family-friendly workplaces and campuses, though it does recommend schools provide “preferred parking for pregnant and parenting women on campus, as well as fathers.” While the blueprint suggests companies should be “incentivized” to provide paid parental leave, nowhere does it voice enthusiasm for any of the paid family leave legislation Democrats have been trying to pass for 30 years.

While none of this so-called guidance or advocacy is exactly new, it is particularly striking given the moment, as the rights protected by Roe hang by a thread and as the Biden administration seeks to radically expand the social safety net for parents and children. Indeed, some of the most anti-abortion members of Congress have been among the loudest opponents of paid parental leave. And not a single Republican senator or representative voted for the Democrats’ American Rescue Plan in March, which provided parents up to $300 a month per child under six. The payments have helped slash child poverty by 25 percent just in the first month of payments—and they have allowed a lot of parents to stay home for a while with post-born babies. Democrats in Congress have been fighting to extend the child payments and to create a federal paid family leave program. But there’s no pro-life bus tour supporting that.