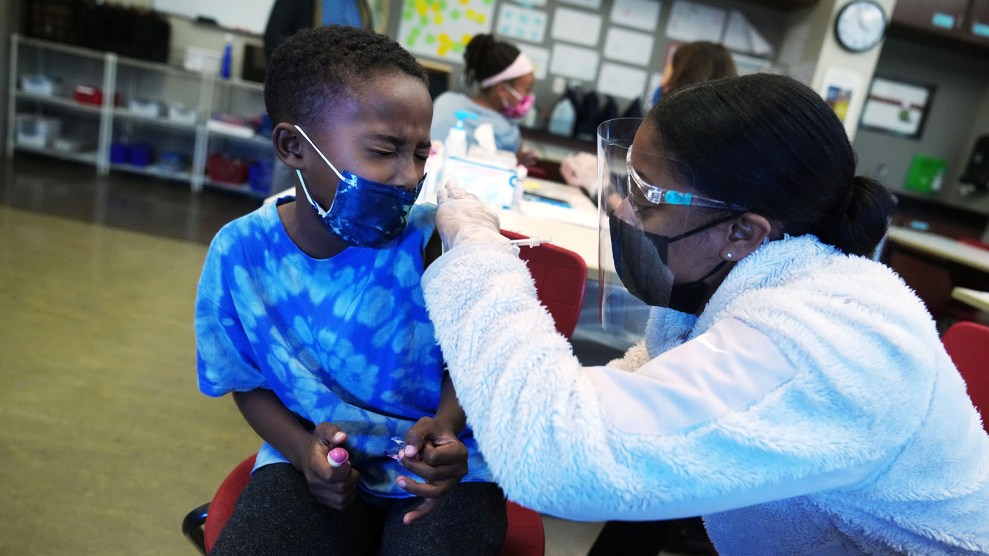 Sasha Taylor believes the COVID vaccine will keep her family together. Back in late February, Taylor, a Black 32-year-old mother of three living in Washington, DC, contracted COVID. Soon after, her 10-year-old daughter, Acia, who suffers from spastic quadriplegia, a lung disorder, and glaucoma, got it, too.

The virus, on top of Acia’s chronic conditions and a bout of pneumonia, forced Acia to quarantine at Children’s National Hospital, while her mother stayed at home. They were only a five minute drive away, but it was a harrowing experience. “She had never spent the night without me,” Taylor said. “It was hard because you want to be there for your child. But all you could do is call and check up on them. You can’t touch them or anything.”

As they recovered, Taylor sent her two other kids, Alea and Arnaldo, off to North Carolina to be with their father. “That was even harder because you know, they didn’t understand why they had to go somewhere else,” Taylor said. “We were sick, and they want to be there with their mommy and sister.”

Taylor, a stay at home mom, wasn’t yet vaccinated. But after she recovered, she got the shot right away when it became available to her. And on November 2, when Acia’s pediatrician informed Taylor that Pfizer vaccines were available for kids over five years old, Taylor brought Acia, Alea, and Arnando to get their shots the next day.

She was met with skepticism from family members, who believed the falsehoods they heard on social media. But those family members hadn’t lived with COVID the way Taylor had. The decision was a no-brainer, Taylor says: Acia had fought the illness off once, but Taylor worried that if she suffered from COVID again without a vaccination, she wouldn’t be so lucky. “I was trying to protect my family,” Taylor says.

The burden of protecting their children from COVID is one acutely felt by parents with kids of color. Data from the Centers for Disease Control and Prevention shows Latinx children, who make up 26 percent of kids between ages five and 11, account for 29 percent of cases. Meanwhile, although underrepresented in case figures, Black kids in that same age group account for just 14 percent of the population and nearly 18 percent of COVID deaths.

When babies and teenagers are included, the numbers are even starker: Black and Latinx children under 17 years old are hospitalized for COVID at roughly three times the rate of white children. Latinx kids account for nearly 34 percent of COVID deaths, and Black children account for roughly 24 percent of deaths. All told, CDC data compiled by the COVKID Project shows that Black and Latinx children under 17 years old die from COVID at a rate at least twice that of white children, a trend that maps onto racial disparities in adults.

Even as case and death data for kids are limited—in at least one-third of cases, race and ethnicity data are missing altogether—those findings indicate that, to get to some sort of endgame in the pandemic and to narrow disparities in affliction, children like Taylor’s need to be reached.

Yet as of December 5, just 17 percent of children between 5 and 12 years old had received their first dose. And it’s difficult to know the extent to which the numbers are worse for kids of color, who make up more than half of eligible children. That’s because the CDC does not connect race and ethnicity data to age—nor do the vast majority of states. In the six states that do—Connecticut, District of Columbia, Michigan, Minnesota, North Carolina, and South Carolina—the data shows that white children were more likely to have received at least one dose of the vaccine than Black and Latinx children. What’s more, the rate of vaccinations among children under 12 have slowed ahead of the holidays.

Still, in some places, efforts have been made to reach families like the Taylor’s. Claire Boogaard, a pediatrician and medical director of the COVID Vaccine Program at Children’s National Hospital in Washington, DC, says that when vaccines first became available to kids, the hospital prioritized those with pre-existing conditions or who live in zip codes that have been hardest hit by COVID. The Washington Post reported that the hospital’s providers wound up identifying 24,000 children.

More than a week after the announcement of expanded vaccine eligibility, Children’s National Hospital’s providers opened eligibility to the public. Since then, 3,390 kids between five and 11 years old had received at least one dose of the vaccine as of mid-December, Boogaard told me. All told, since November 3, the hospital’s providers distributed 5,882 doses of the COVID vaccine, with 72 percent of them going to Black and Latinx patients and 42 percent of doses going to people living in “high priority neighborhoods” in Washington, DC. “Our physicians and providers are working hard at 21 locations throughout the region to educate individuals and offer the vaccine,” Boogaard wrote in an email. “We are still finding people that have some hesitancy but, as with the older population, we find conversations with trusted healthcare providers are helping.”

In conversations with families, Boogaard, who is white and works with patients at a pediatric clinic associated with the hospital in Ward 8, a predominantly Black area and the hardest hit area of the District, tries to strike a balance between advocating for the vaccine and building trust with parents who may mistrust the medical establishment or have questions about how the vaccine would affect their kids. “It is very frustrating to see just the inequities and the disproportionate burden that lays on this community due to institutional, institutional and systemic, both historical and current, and injustices that are taking place,” Boogaard, who has a six-year-old herself, told me. “This is a disease that is affecting communities of color much more than white communities, and that’s very scary. There are many reasons why the vaccine causes pause in this community as well, and I find that to be another consequence of many of these same systemic issues that have come up.”

Elizabeth Pathak, an epidemiologist and founder of the COVKID Project, notes that there are other ways to incentivize vaccination among children, like school vaccination mandates. Schools, she points out, mandate vaccinations for other diseases. But such mandates have already run into challenges: California’s statewide mandate, the first in the nation, likely won’t go into effect until next fall. School-based clinics could also function as an equalizer for kids of different socioeconomic backgrounds, says Pathak, and ensure vaccine access for those whose families might not otherwise be able to get them to a vaccine appointment. In Chicago, for instance, the city school district shuttered classrooms for a day and made vaccines available at school sites. And in New York City, elementary schools served as vaccine clinics after Pfizer shots were approved for kids 5 to 11 years old. Chalkbeat, an education news site, reported that of the 130,000 kids in that age group in New York City, 41,000 received at least one dose at public schools.

Now that her kids are back to learning in-person, Taylor worries about the choices of the other parents with children at her kids’ schools, particularly those who “don’t believe that their kids should get vaccinated, and they shouldn’t be forced.” Dropping them off for their first in person day of classes, she remembers feeling terrified that she’d soon receive an email about an outbreak.

So she focuses on protecting her own family. When her son Arnando was reluctant to get a second shot, she spoke to him and told him, “you know, this gonna help us from getting sick.” “You just got to trust mommy.”