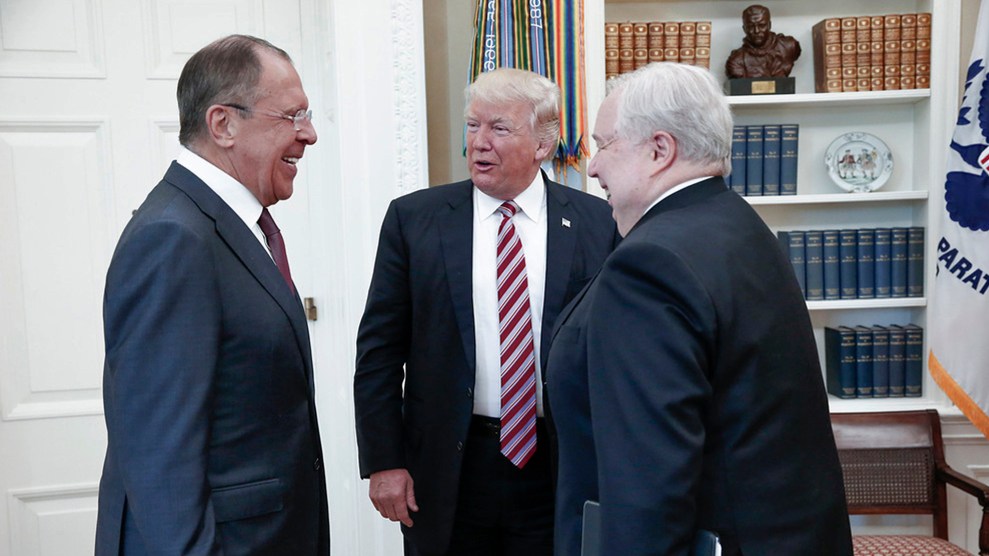 In the midst of an international crisis created by Russia that could potentially trigger a war in Europe, Republicans and right-wingers on and off Fox News have pledged allegiance to…Vladimir Putin. At the least, they are siding with the Russian autocrat and trash-talking President Joe Biden’s effort to block his aggression. But there’s nothing surprising about the ongoing romance between conservatives and the democracy-crushing thug-leader of Russia, who has invaded Ukraine and violated international law. Anyone shocked by this has forgotten one of the key facts of the 21st century: Putin waged war on the United States, and Donald Trump and his party aided, abetted, and benefitted from that attack.

In recent days, as Putin has threatened a conflagration, top conservatives and GOP officials have practically pinned “I’m-with-Vlad buttons” onto their lapels. One example: Mike Pompeo, Trump’s final secretary of state and before that his CIA director, had only praise for the corrupt Russian autocrat, describing him as “talented” and “savvy.” Donald Trump, speaking to a conservative podcaster on Tuesday, hailed Putin’s moves in Ukraine as “genius.” Referring to Putin’s invasion of eastern Ukraine, Trump said, “Putin declares a big portion of…of Ukraine. Putin declares it as independent. Oh, that’s wonderful…I said, ‘How smart is that?’ And he’s gonna go in and be a peacekeeper…Here’s a guy who’s very savvy.” Later in the interview, Trump continued to gush: “I knew Putin very well. I got along with him great. He liked me. I liked him. I mean, you know, he’s a tough cookie, got a lot of the great charm and a lot of pride. But the way he—and he loves his country, you know? He loves his country.”

“I knew Putin very well. I got along with him great. He liked me. I liked him. I mean, you know, he’s a tough cookie, got a lot of the great charm.”

No condemnation. No call for opposing Putin’s illegal and provocative maneuvers. Just one big bear hug from Trump for the tyrant. Putin may spread repression by force but he sure “loves his country.” (Remember, Trump’s crush on Putin stretches back to 2013 when he tweeted: “Do you think Putin will be going to The Miss Universe Pageant in November in Moscow—if so, will he become my new best friend?”)

Conservatives have also boosted Putin by pooh-poohing the invasion of Ukraine as no big deal. In his usual too-clever-by-half way, Tucker Carlson on Tuesday night dismissed outrage over Putin’s aggression:

What is this really about? Why do I hate Putin so much? Has Putin ever called me a racist? Has he threatened to get me fired for disagreeing with him? Has he shipped every middle-class job in my town to Russia? Did he manufacture a worldwide pandemic that wrecked my business and kept me indoors for two years? Is he teaching my children to embrace racial discrimination? Is he making fentanyl? Is he trying to snuff out Christianity? Does he eat dogs?

It seemed as if Carlson was quasi-defending Putin because the Russian leader does not advocate critical race theory and is not the leader of China. He ridiculed concerns over Putin’s threat to world peace and stability and asserted Americans are being “trained to hate” the Russian leader. In other words, there’s no reason to fret about Putin’s militarism—and if you do worry, you’re just a brainwashed sheep. Carlson is proudly anti-anti-Putin. Pro-Trump right-wing activist Charlie Kirk less eloquently pushed another talking point that assists Putin: “Who cares? This is a family dispute between two countries. One (Russia) rather strong. And one (Ukraine) very corrupt and weak.” And MAGA personality and now self-proclaimed foreign policy expert Candace Owens encouraged Americans to accept Putin’s take on the Ukraine conflict and tweeted, “WE are at fault.”

Republicans are driven by an old adage: The enemy of my enemy is my friend. It’s Biden-hatred on steroids. Biden is in a confrontation with Putin. Thus, Putin must be doing something right. Their priority is not how to restrain Putin but how best to troll Biden. Rep. Elise Stefanik (R-N.Y.), for one, tweeted: “Joe Biden is unfit to serve as Commander-in-Chief. He has consistently given into Putin’s demands and shown nothing but weakness.”

Joe Biden is unfit to serve as Commander-in-Chief.

He has consistently given into Putin's demands and shown nothing but weakness.

Former scandal-ridden House Speaker Newt Gingrich took a similar stance: “Putin is pushing day by day and has no fear of NATO because he has no fear of the United States or its President.”

This is all patently absurd when considered against the record of Trump’s own interactions with Russia. As yet more proof of what Gore Vidal rightly dubbed “the United States of Amnesia,” these Republicans and right-wingers are conveniently overlooking the original sin of the Trump presidency: how Trump assisted Moscow’s assault on the United States. When Putin mounted a covert attack on the US election in 2016 to help Trump win, Trump and his crew denied this was happening. Moreover, at a press conference during the campaign, Trump encouraged Russian hackers to target Hillary Clinton. (It seemed the Russians were listening. Hours later, according to special counsel Robert Mueller’s investigation, Moscow’s cyber ops tried to break into Clinton’s personal email server.)

Trump’s denials—which came after his top advisers (Donald Trump Jr., Paul Manafort, and Jared Kushner) had been privately informed that Moscow was trying to clandestinely help his campaign—provided cover to Putin. They also made it extremely difficult for any Republican to denounce the Russian operation. How could the GOP fiercely oppose something that its leader insisted wasn’t happening? When President Barack Obama reached out to Mitch McConnell, then the Senate majority leader, and asked him to join the administration in forging a forceful bipartisan response to Moscow’s underhanded intervention in the American election, this top Republican told Obama to take a hike.

After he became president, Trump, fearful that the successful Russian attack undermined the legitimacy of his victory (which it did), continued to serve Putin’s interests and never pressed him on this matter. During a May 10, 2017, Oval Office meeting with Russian foreign minister Sergey Lavrov and Russian ambassador Sergey Kislyak, Trump reassured the pair that he was unconcerned about Moscow’s interference in the election. (A Russian photographer snapped shots of the three of them yukking it up in the Oval Office. American journalists were not allowed to witness the meeting.) A year later, when Trump and Putin held a joint press conference following a summit in Helsinki, Trump told reporters he trusted Putin when he said that Moscow had not sabotaged the 2016 election: “President Putin says it’s not Russia. I don’t see any reason why it would be.” It was all, Trump incessantly insisted, “a hoax.”

Throughout Trump’s presidency, Republicans assisted or excused their leader’s profound betrayal. They echoed his claims that any investigation of Putin’s attack and the Trump campaign’s interactions with Russians was just a witch hunt. They concocted conspiracy theories—the real scandal was Ukraine helping Hillary Clinton!—to deflect attention. They endeavored to turn the investigation of the Trump-Russia scandal into the real scandal. (Trump was spied on!) They never acknowledged the commander-in-chief had helped a foreign government conduct clandestine information warfare against the United States and that they had all gained from this attack.

Now the Trump cult glorifies the despot who assaulted American democracy. Or they condemn an American president for being weak in the face of Putin’s aggression. Or both. There’s a Russian proverb: Hypocrites kick with their hind feet while licking with their tongues. These days, Republicans and conservatives are quite busy with both ends of that equation.