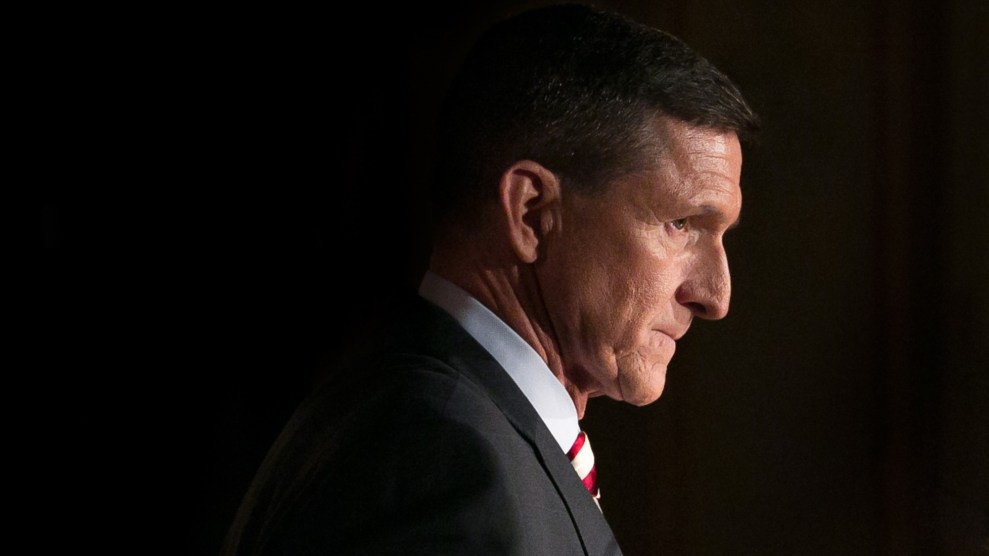 Before Michael Flynn supported a coup attempt, became a QAnon proponent or pleaded guilty to lying to the FBI about Russia, he secretly lobbied in the United States on behalf of Turkey’s president. And that first Flynn scandal is still playing out in the courts.

On Friday, federal Judge Anthony Trenga ruled that Bijan Rafiekian, Flynn’s former business partner, who was convicted in 2019 of conspiring with Flynn to illegally lobby for Turkey, should get a new trial. Flynn avoided prosecution for the Turkish lobbying after first cutting a cooperation deal with special counsel Robert Mueller—through which he pleaded guilty to separate conduct related to Russia—and then winning an unusually broad pardon from Trump for “any and all possible offenses” linked to Mueller’s probe.

Trump boosters long ago deemed Flynn a martyr unfairly targeted by the Justice Department as part of the Trump-Russia probe. But Rafiekian’s case highlights how fortunate Flynn was to avoid prison. Flynn admitted in court to illegal lobbying for Turkey and to lying to the FBI about multiple matters. The Turkey plot was no minor matter. While advising Trump’s campaign in 2016, Flynn and his partners were secretly paid to “covertly influence United States politicians and public opinion” to help Turkey win extradition of cleric Fethullah Gulen, the Justice Department said. Turkish president Recep Erdogan blamed Gulen, who lives in Pennsylvania, for masterminding, from afar, a failed 2016 coup attempt. As part of an effort to help Turkey get custody of Gulen and land a $15 million reward from Turkey, Flynn and associates reportedly discussed a plan to kidnap the cleric, though they did not proceed with that plan. Flynn has denied plotting to kidnap Gulen.

In ordering a new trial for Rafiekian Friday, Judge Trenga said that Flynn appeared to be more central to the lobbying plot than his partner. “The strongest inference to be drawn from the evidence as a whole is that to the extent Turkey had recruited anyone as its agent, it was not Rafiekian, but Flynn because of his stature and his connections to then Presidential candidate Donald Trump,” Trenga wrote. The judge also said that “the recruitment of Flynn, to the exclusion of Rafiekian,” is detailed in classified materials never released to the public.

Rafiekian’s case has turned on Flynn’s own legal situation. (The DOJ also indicted a third alleged conspirator, Kamil Alptekin, who was accused of steering payments to Flynn and Rafiekian through a front company in the Netherlands. Alptekin remains out of US reach in Turkey.) As part of his cooperation deal with Mueller, Flynn admitted to lobbying for Turkey and lying to the Justice Department about it. His cooperation helped prosecutors build cases against Rafiekian and Alptekin. But Flynn eventually fired the lawyer who negotiated his guilty plea and hired Sidney Powell, an attorney who was relatively unknown at the time. Powell argued Flynn was coerced into pleading guilty and attempted to withdraw Flynn’s plea, eventually convincing Attorney General William Barr to intervene in the case and move to drop charges Flynn had already pleaded guilty to. That effort was still being hashed out in court when Trump pardoned Flynn.

But Flynn’s reversal—he also tried to walk back his admissions about Turkey—left prosecutors without their main witness against Rafiekian. A jury convicted Rafiekian anyway, but Trenga threw out that conviction, ruling the government had not presented enough evidence. Last year, an appeals court reinstated the jury’s initial verdict. Trenga’s latest ruling means that Rafiekian will have another chance to win acquittal, though prosecutors may elect to appeal again or to drop the case entirely.

Rafiekian denies wrongdoing. Flynn, though he has since changed his tune, admitted it. But unlike his former partner, Flynn has no chance of being prosecuted again, thanks to Donald Trump.