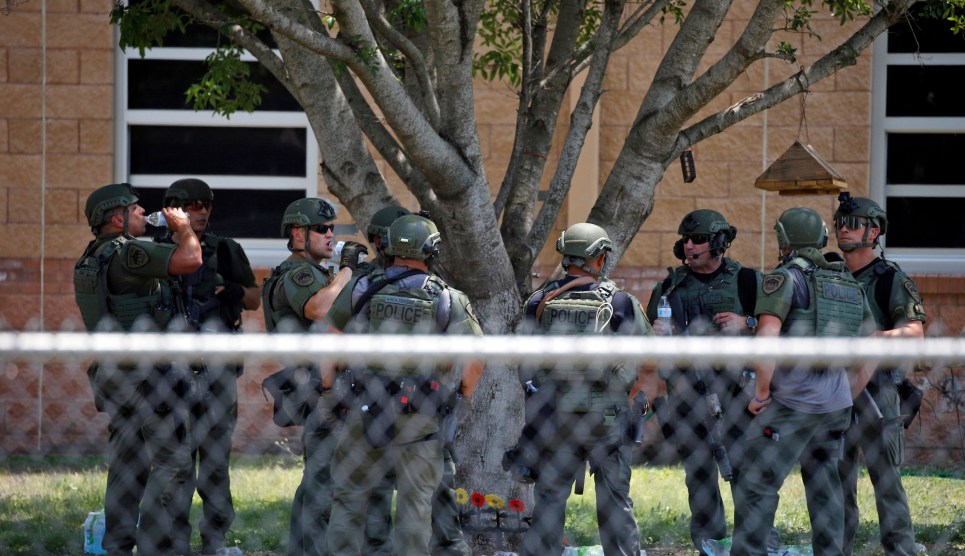 Law enforcement personnel stand outside Robb Elementary School following a shooting, May 24, 2022, in Uvalde, Texas. When the gunman arrived at the school, he hopped its fence and easily entered through an unlocked back door, police said. He holed himself up in a fourth-grade classroom where he killed the children and teachers. AP Photo/Dario Lopez-Mills, File

More details are emerging over just how long law enforcement took to stop the Uvalde school shooting this week, including horrifying descriptions of how children suffered while police waited outside gathering resources and preparing themselves to intervene. As it becomes apparent that law enforcement delayed up to an hour before storming the building, criticism of their performance and their previous account of the event is growing. On Saturday, Texas’ lieutenant governor Dan Patrick, a conservative who has made attacking those who criticize law enforcement a key part of his political brand, said on Fox & Friends that he and others in the Texas government “were not told the truth” following the Uvdale shooting that killed 19 children and two adults.

Initial reports, provided by law enforcement sources immediately after the shooting, described armed school security and local police officers engaging in a gun battle with the shooter, and then working to quickly rescue surviving children. That narrative changed over subsequent hours and days as details began to emerge of the scene both in and outside the school. Parents, who frantically waited outside the school as the shooting continued, fought with law enforcement who tried to prevent them from entering the building, even as they failed to move into the school themselves and confront the shooter. One mother who wanted to gain access said she was handcuffed by US marshals and threatened with arrest. On Friday, transcripts of 911 calls made by children begging for help from the classrooms for as long as an hour were released.

Investigators now say that the school district’s police department chief ordered officers to hold back from confronting the shooter because he thought it was a siege situation, in which shooter was isolated and could be approached by law enforcement, and not an active shooter continuing to threaten children’s lives. School shooting experts say that was the wrong choice and goes contrary to training in the decades since the Columbine shooting in 1999.

On Friday, Texas Gov. Greg Abbott acknowledged that he was mistaken in his earlier praise for law enforcement’s response. At a press conference on Wednesday, Abbott had claimed, “As horrible as what happened, it could have been worse. The reason it was not worse is because law enforcement officials did what they do. They showed amazing courage by running toward gunfire for the singular purpose of trying to save lives.”

On Friday, Abbott said he was “livid” that he had been given wrong information.

On Saturday, Patrick joined his colleagues and said the initial reports were wrong: No armed security confronted the shooter, and local police officers arrived only after he had entered the school and did not confront him directly. As Patrick told the Fox hosts:

We were told that there was a security officer and they were a little hazy on how the engagement went, but that a security officer was there. Well, it turned out he was not on campus. He drove on to the campus, but he was not on campus, as we were told and led to believe. No one mentioned the fact that there was this 45 minute-to-an-hour hold by the chief of the police of the school district while there were still shots being fired.

Patrick has been most visible in the days after the Uvalde tragedy, appearing in public events and on cable news saying that faith in Jesus Christ is one of the most important ways to respond to the shootings.

.@TuckerCarlson asked me to come on this evening and I shared with him what a heartbreaking night this is for everyone. pic.twitter.com/RHKc9WmpIl

On Saturday, as the National Rifle Association conducted the second day of their convention in Houston,  Texas Democratic lawmakers opted for a more direct route to address the problem of mass shootings. They proposed a special session to vote on raising the age to purchase a gun and requiring background checks. The Uvalde shooter waited until the day after he turned 18, the minimum age to buy guns, to purchase the weapons he used, and didn’t have to submit to a background check.