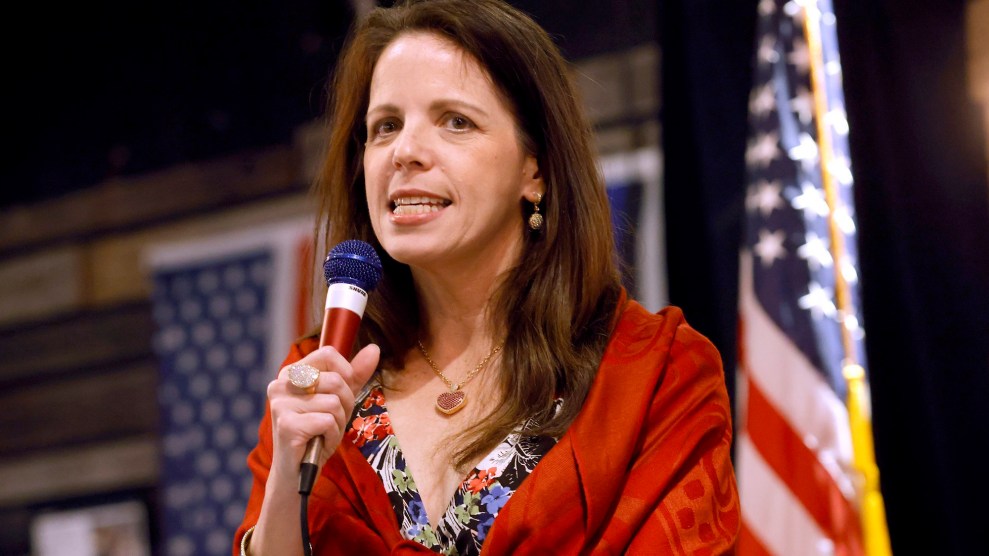 For most of the past year, Simone Gold, a prominent Covid misinformation spreader who is both an emergency room doctor and Stanford-educated lawyer, has insisted that she is the victim of a political prosecution after she was arrested and indicted for helping storm the US Capitol on January 6, 2021. Her organization, America’s Frontline Doctors, has raised hundreds of thousands of dollars from her supporters who believe her claims that the government is just trying to silence her views on mask mandates, vaccines, and other pandemic responses.

On Thursday, however, that “free speech” campaign came back to haunt her as a federal judge in the US District Court for the District of Columbia sentenced her to 60 days in prison for her role in storming the Capitol. Gold had spent more than 45 minutes inside the Capitol that day, and as she stood on a statue of President Dwight D. Eisenhower in the Capitol Rotunda used a bullhorn to rally the crowd with a speech promoting bogus Covid cures. In March, Gold pleaded guilty to the most serious misdemeanor in the indictment, and in a sentencing memo, her lawyers said she was deeply remorseful for her actions at the Capitol. The prosecution, they said, threatened her medical license and had even put her on the no-fly list, hampering her ability to make a living on the speaking circuit she’s been on for the past year. (She had to drive to DC from Florida for the hearing.) They cited her elite professional credentials as a reason that she should receive time served and probation for her crime.

But US District Court Judge Christopher Cooper was not persuaded by Gold’s credentials nor her claims of remorse for her actions. “You were not just a casual bystander,” Cooper told her, noting that he didn’t believe that she had “truly accepted responsibility” for her role in the riot that day.

As evidence, he pointed to fundraising language on her group’s website calling her prosecution a “political prosecution” and an attack on free speech. He also read from several of the dozens of nearly identical letters he has received from her supporters all claiming that Gold had done nothing more than exercise her free speech rights. Her group’s website site, he said, is “mischaracterizing what this proceeding is all about. That’s not why we’re here. January 6th was not about free speech or Covid.” He told Gold that while he had heard a great deal about this from her and her supporters, “What I haven’t heard is anything about the five people who died that day, the four people who commit suicide” because of the trauma of the event, or the terrorized members of Congress and their staff who were in the building being threatened by the mob she was part of.

During the hearing, Cooper disclosed that he had also received a letter from Kristina Lawson, the president of the California board of medicine, which is considering revoking Gold’s medical license. Lawson urged him to throw the book at Gold, who she alleged has organized a major harassment campaign against her since her indictment on the January 6 related charges. “Her actions have provoked and inspired menacing threats against me from individuals across the country,” Lawson wrote. “I have been stalked and accosted at my home and place of employment, causing great anxiety and fear. Through Simone Gold’s acts of attempted intimidation, she continues to seek to undermine public officials and the role of our government as she did with her participation in the violent insurrection on January 6, 2021.”

As evidence, she pointed to a video Gold produced and released in March 2022 that depicts Lawson as a Nazi with a swastika on her arm. Lawson also said Gold had encouraged her 400,000 Twitter followers to call and email Lawson, which resulted in death threats—all of which happened after she pleaded guilty to a federal misdemeanor for illegally entering the US Capitol.

“Since December 6, 2021, not a day goes by that I don’t look over my shoulder wondering if I am being followed. I have had to hire private security to ensure my safety, and the safety of my family and my colleagues,” Lawson wrote. “Simone Gold and her organization have actively targeted me because I am a public official. She orchestrated a series of terrorizing events in an attempt to intimidate me and silence me. Consistent with the crimes she committed on January 6, 2021, over the course of the past six months she has attempted to impede and obstruct California’s legal processes by targeting and terrorizing me. She is dangerous and must be stopped.” The letter was sensational, and even Gold’s lawyers seemed to want it entered into the record because it proved their argument that Gold was at risk of losing her medical license because of the prosecution, but Cooper said the correspondence wasn’t related to the charges before him and involved fact-finding he wasn’t authorized to do, so it would not impact his sentencing decision.

“She has attempted to impede and obstruct California’s legal processes by targeting and terrorizing me. She is dangerous and must be stopped.”

Gold’s truthfulness was a central issue in the hearing. A few days after the insurrection, she had given an interview to the Washington Post in which she claimed that her location at the Capitol that day was “incredibly peaceful.” But prosecutors played a video in court that was anything but peaceful. It showed the violent mob that Gold was at the front of, pushing through a broken door into the west side of the Capitol. The mob pushed a police officer to the ground in front of her. Yet Gold continued to claim she hadn’t seen the officer go down. “I find it implausible that you didn’t see that,” Cooper said, noting that in fact, Gold used the opportunity of the officer’s fall to advance into the building.

Noting that she had impressive professional credentials, including her Stanford law degree, which she had cited in her sentencing memo as a reason why she should not be sent to jail, Cooper said those credentials were in fact evidence that she should have known better. “I think you well knew what you were doing,” he said.

The probation officer investigating her case had pushed for a six-month sentence because of issues he’d had with her honesty. He disclosed that when an officer tried to conduct a home visit as part of a presentencing investigation, he discovered that the address Gold had provided was that of a UPS store in Florida. Her lawyer claimed in court that Gold had made a mistake and that she had given the fake address because she had experienced death threats and was wary of giving anyone her home address. Gold, who had lived in Beverly Hills, California, for many years, relocated to Naples, Florida, after claiming to be traumatized by her arrest at gunpoint at her California home last year. But the probation officer said that Gold’s lawyer was aware of the error but did not correct it until his office contacted her days later.

In a high, quiet voice very different from the one she uses in her fiery public speeches, Gold addressed the judge before he sentenced her. A half dozen of her supporters were in the courtroom to watch, repeatedly violating the mask rules and getting chastised by the marshals. Gold described her upbringing as the child of a Holocaust survivor and physician who raised his children to serve others, and who impressed on her the Jewish value of saving a life, a reason she decided to practice medicine. “I’m just trying my best. I was imperfect. I try to help people,” she said, choking up. “I’m shocked that the government thinks I’m not remorseful.” She insisted that she had already suffered from her actions because “the punishments will chase me forever.”

But Cooper was unmoved. “I find it unseemly that your organization is raising hundreds of thousands of dollars for its operations and your salary based on your participation in January 6. It does a real disservice to the victims of that day.”

Gold showed little emotion as Cooper sentenced her to 60 days in federal prison, and imposed a fine of $9,500, payable to the Architect of the Capitol to help compensate for the more than $2 million in damages the building suffered there during the insurrection. In his parting words, Cooper told Gold, “Good luck to you.”