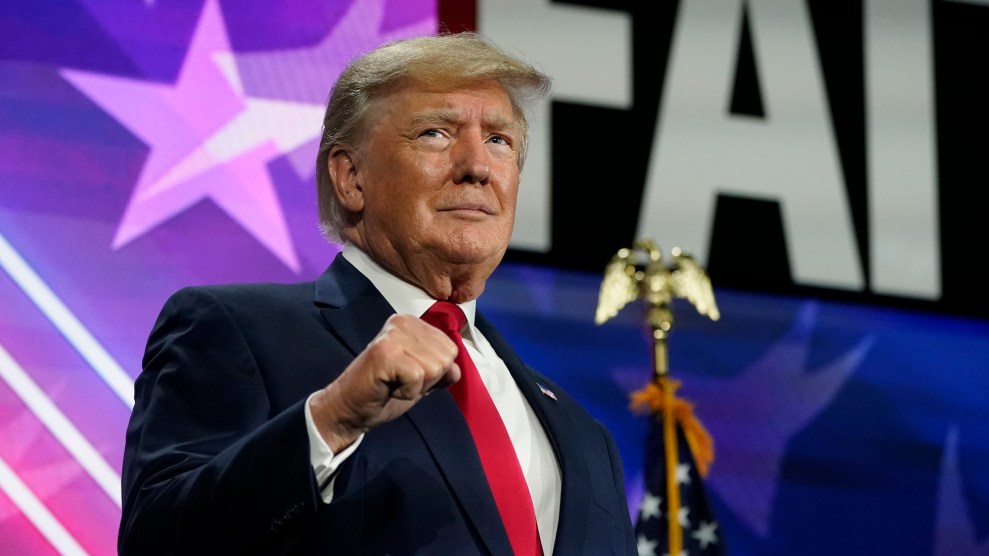 Donald Trump’s plan to exact revenge on Big Tech—and make billions by launching his own social media empire and taking it public—was always going to be a long shot. And while it’s not yet dead, the obstacles are mounting.

For starters, Trump Media & Technology Group is reportedly not making payments to vendors. Last week, Fox Business reported that RightForge, an internet hosting company that markets itself as friendly to conservative customers who can’t find hosting elsewhere, has not been paid since March. That’s no small matter; RightForge is reportedly providing much of the technical underpinning of the TruthSocial platform—and the company is apparently owed as much as $1.6 million. A representative for TMTG did not respond to a request for comment from Mother Jones, but it would not be altogether surprising if TruthSocial is facing a cash crunch. Making money running a social media business is, at best, a dicey proposition. Twitter, which has more than 230 million users, managed to lose $270 million last quarter. TruthSocial has perhaps 2 million active users (Trump himself has 3.9 million total followers).

But the plan was never to have TruthSocial pull itself up by its bootstraps, making its way on whatever revenue it could scrape together. From the beginning—the nascent media business was announced last September—Trump’s goal has been to take the whole operation to the stock market, where (theoretically) huge sums of money can be raised from investors. But Trump’s toxic post-January 6 reputation has made that more difficult; in the wake of the insurrection, a number of financial institutions cut ties with him, closing his bank accounts and swearing off any more lending. With no big banks to back an IPO, Trump turned to something called a SPAC—a special purpose acquisition company, or a blank-check company—to take TMTG public. The idea is to merge his company with a company that is already public, but has no business to speak of. That would short-circuit the need to have a lengthy IPO. But it also offers a lot of opportunities for the deal to run into trouble, which is what appears to be happening now.

Last September, Trump announced TMTG would merge with Digital World Acquisition Corp (DWAC), a SPAC company that had gone public and was looking for a partner. After the proposed deal was revealed, DWAC’s share price rocketed above $97. It has since fallen below $30, where it currently sits. The deal, which caused such excitement initially, was supposed to happen quickly. Like most SPACs, DWAC has rules in its organizing charter that make it clear that the company’s founders have to find a merger partner expeditiously, or else give back the money they raised from investors. The deadline for DWAC to make its merger with TMTG happen is Sept. 8.

DWAC”s founders have asked investors to approve an extension of that deadline—and on Sept. 6, shareholders will be able to vote to give the company another year to complete the deal. There is no guarantee that investors will approve the deadline extension—although most would likely lose money if the company was forced to shutter itself and return the funds it had raised in its IPO.

Even if shareholders go along with the founder’s request, the SEC filing in which DWAC asked its shareholders to extend the deadline is full of even more pitfalls that have to be negotiated.

For starters, as the document makes clear, the Sept. 6 vote will only extend DWAC’s ability to merge with TMTG—TMTG also has to approve an extension. And then there are the PIPE investors. As part of the SPAC process, big-time financial players—such as hedge funds, private-equity firms, or banks—can make large investments known as PIPE investments. In the case of DWAC, PIPE investors put in $1 billion, which would be made available to the new company following the merger. But, according to DWAC’s message to shareholders, those PIPE investors can start pulling their money out on Sept. 22 if the merger hasn’t happened. If any of these funders have gotten cold feet, they might be able to just walk away.

The biggest thing holding the merger up right now is the fact that DWAC is under investigation by multiple federal regulators. Another one of the rules of SPACs is that when the founders of the SPAC took the business public, it was supposed to be a truly blank company. There wasn’t supposed to be any coordination ahead of time with a venture like TMTG to cook up a scheme to bring the two companies together. Those discussions and that agreement were supposed to happen only after DWAC went public on Sept. 23, 2021. Both the Securities and Exchange Commission and the Financial Industry Regulatory Authority are investigating the possibility that there were indeed discussions between Trump’s camp and DWAC before DWAC went public. Both companies have denied any wrongdoing.

As long as that investigation drags on, DWAC told investors, the merger probably isn’t happening.

But that’s not all! Along with all those grim possibilities for ways that various groups could sink the whole deal, DWAC also warned investors that Trump’s waning popularity might make it difficult for any deal to ever happen.

“The success of the Business Combination depends in part on the popularity of TMTG’s brand and the reputation and popularity of its Chairman, President Donald J. Trump,” DWAC’s most recent filings says. “The value of TMTG’s brand may diminish if the popularity of President Trump were to suffer. Adverse reactions to publicity relating to President Trump, or the loss of his services, could adversely affect TMTG’s revenues, results of operations and its ability to maintain or generate a consumer base, as well as the outcome of the proposed Business combination.”

As much as some TruthSocial users say they love the platform, the reality is there just aren’t very many of them. While the platform has been busy since the FBI raid on Mar-a-Lago, with Trump using it to blast out angry messages (and repost QAnon propaganda), it simply isn’t a thriving site. There are huge problems with content moderation, with both accusations that the company uses the same “shadow-banning” tactics that Trump derided Twitter for allegedly using against conservatives (the company denies it does any type of shadow-banning) and huge quantities of violent content being posted freely. In fact, the platform’s problems moderating all that violent content led to Google saying Tuesday that it would continue to exclude TruthSocial from its app store.

The big problem, which DWAC acknowledged in its discussion of risks, is that a lot of people just don’t want anything to do with Trump or TruthSocial.

“According to The Hill, only 30% of people surveyed would use a social media site associated with President Trump. In addition, according to a survey published in The New York Post, only 60% of Republicans would use such a platform,” DWAC’s filing says. “In order to be successful, TMTG will need millions of those people to register and regularly use TMTG’s platform.”