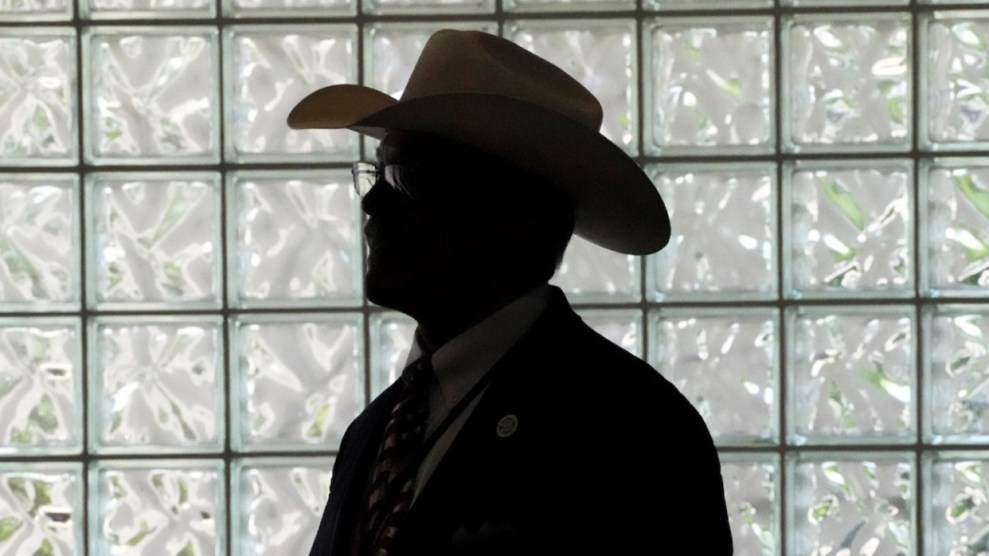 Mark Finchem, GOP candidate for Arizona secretary of state, attends a conference on conspiracy theories about voting machines and discredited claims about the 2020 presidential election in West Palm Beach, Florida, September 10, 2022. The event featured Republicans running for statewide offices that oversee elections in some of the most important battleground states. Jim Rassol/AP

An ally of white nationalists; a former CEO and conspiracy theorist who tried to convince Donald Trump to use the National Guard to seize voting machines after the 2020 election; an Ohio math teacher who claims he discovered an algorithm showing that virtually every county in the United States was hacked to prevent Trump’s reelection two years ago—these are people with whom Republican secretary of state candidates have forged alliances.

Mark Finchem, Jim Marchant, and Kristina Karamo, each an election denialist and a GOP contender for secretary of state in, respectively, Arizona, Nevada, and Michigan, were scheduled to appear October 29 at a self-described “Florida Election Integrity Conference 2.0” in Orlando. Also on the bill: other proponents of Trump’s Big Lie that the election was stolen from him. The event, one in a series of such conferences being mounted by 2020 truthers across the country, shows how these Republican candidates are closely tied to right-wing extremism. The previous conference in this series, held in New Mexico, was moderated by Lara Logan, the past CBS News reporter who has recently been mouthing bonkers QAnon-ish claims that a Satanic global cabal of elitists is kidnapping hundreds of thousands of children to drink their blood. (She has been booted off Fox News and Newsmax for her conspiracy-driven ravings.)

The Florida event is moderated by Carolyn Ryan, who works for Real America’s Voice, a conservative network that broadcasts Steve Bannon’s daily show and has promoted QAnon material. Scheduled speakers at the conference—in addition to the three Republican secretary of state candidates—include Laura Loomer, Patrick Byrne, and Douglas Frank, each a luminary in the 2020 truther movement.

In August, Loomer, who describes herself as a “proud Islamaphobe,” narrowly lost a Republican primary contest for a House seat. She had previously declared, “I’m a really big supporter of the Christian nationalist movement,” and “I’m going to fight for Christians, I’m going to fight for white people, I’m going to fight for nationalist movements.” She has also proclaimed, “I love Nick Fuentes,” referring to one of the nation’s leading antisemitic white nationalists, called this racist an “ally,” and agreed to speak at one of his conferences. After losing that GOP congressional primary, Loomer insisted she was the victim of election fraud—yes, another conspiracy theory—and called on MAGA Republicans to not vote for the Republican candidate who defeated her.

Byrne has earned notoriety in several ways. He was head of Overstock.com for two decades and resigned in 2019 following the revelation that he had had an affair with  Maria Butina, a Russian agent who infiltrated the American conservative world, including the NRA. After the 2020 election, he championed the baseless claim that voting machines had been rigged to ensure Trump’s defeat. And Byrne pushed Trump to adopt extreme measures. He attended the infamous December 18, 2020, meeting in the Oval Office with Rudy Giuliani and Sidney Powell, two lawyers challenging the election results for Trump, and former national security adviser Michael Flynn. Byrne urged Trump to order the National Guard to round up voting machines across the nation and overturn the election. He appeared with Michael Flynn on Alex Jones’ show last year and called the January 6 riot a “deep state attempt to trigger a bloody civil war.” Byrne hasn’t confined his loony conspiracism to the 2020 election. As the Washington Post reported, “He toured the country in the midst of the coronavirus pandemic, giving anti-vaccine speeches, and he has spread misinformation about covid-19 on websites and via social media.”

Frank has been a regular on the Big Lie circuit, attending gatherings across the country. As CNN notes, at these events, Frank presents an “absurd mathematical equation” that he claims proves the 2020 election was stolen. At a Texas country club, according to the network, Frank asserted, “Just about every county in the country was hacked.” His claim has been debunked by elections experts and mathematicians. His work has been partially financed by Mike Lindell, the pro-Trump pillow manufacturer who has advanced conspiracy theories about 2020 and repeatedly declares he has proof the election was stolen. Earlier this year, CNN reported, “When Lindell and Frank met with Alabama Secretary of State John Merrill on two occasions [in 2021], Merrill said, it also didn’t take much effort for him to discredit their wild election claims. ‘Every time they gave us an example, we were able to refute what they showed us without even knowing what they were going to do when they arrived,’ said Merrill, who’s a Republican.”

The Florida conference lined up other regulars in the election denial world, including Seth Keshel, a self-described sales manager and baseball analyst who produced a report endorsed by Trump and Bannon claiming widespread fraud flipped the 2020 results—a report that was also debunked.

It’s not surprising that Finchem, Marchant, and Karamo would participate in an election denialism shindig. They have each championed Trump’s lies. Moreover, Finchem has hobnobbed with QAnoners and 9/11 truthers; Karamo was slated to appear at a QAnon conference last year; and Marchant in 2021 spoke at a QAnon event, where he said he had been convinced to run for secretary of state by a key QAnon influencer. Yet this conference is a reminder of how far gone the GOP is. Leading Republicans, who are vying for positions critical to the operations of elections in swing states, are not bothering to hide their ties to fringe players, bigots, and loony conspiracy theorists, not even in the final days of the campaign. There’s not much integrity in the so-called election integrity movement, but these events certainly are accurate displays of how extreme and unhinged the GOP has become.