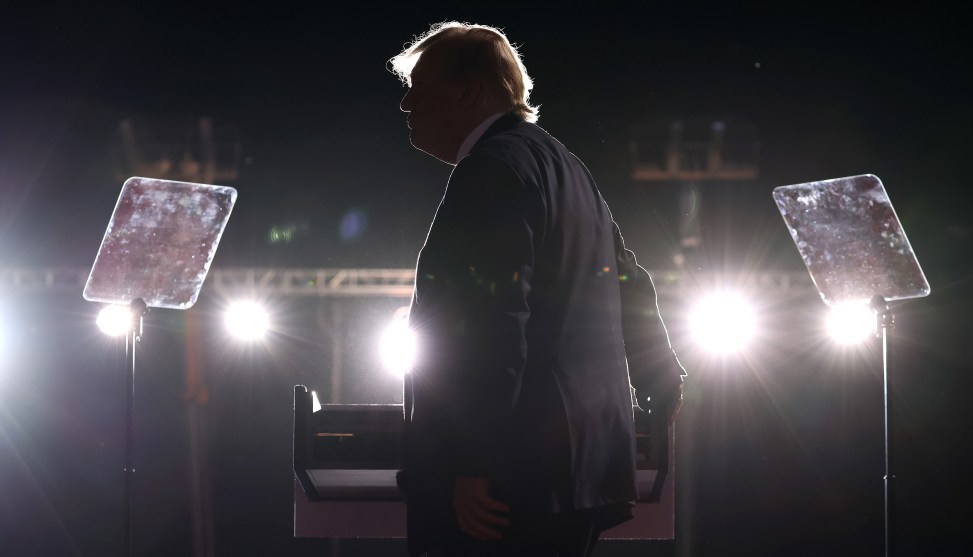 Trump speaks during a campaign rally in Minden, Nevada, on Oct. 8.Justin Sullivan/Getty

In the final weeks before the 2022 midterms, faced with multiple government investigations, Donald Trump has tripled down on a disturbing pattern of incitement. He continues to stoke grievance and fear and use inflammatory rhetoric that is likely to instigate random followers to violence, a technique experts call stochastic terrorism. In recent speeches, Trump has denounced “vicious” political adversaries as “thugs,” “zealots,” and “tyrants” and has warned supporters of a domestic menace: “Despite great outside dangers from other countries, our biggest threat remains the sick, sinister and evil people from within our own country.”

The ex-president has long used demonizing language to put targets on institutions and individuals, from the Justice Department and FBI to the New York attorney general and the GOP Senate minority leader; recently Trump declared that Mitch McConnell’s supposed defiance of him amounted to a “DEATH WISH.” The subsequent backtracking by a Trump spokesman, who implied Trump merely meant a “political death wish,” is part of the incitement technique—an effort to establish deniability, as I’ve detailed in a series of articles since 2020 on Trump’s use of such rhetoric. An especially troubling component is Trump’s dehumanization of his purported enemies, a tactic that researchers have found escalates the risk for political violence.

Trump knows he is not stoking this peril in a vacuum. Violent threats have soared around racial, gender, and various other political issues, and national media often highlight acute partisan polarization and debate about prospects for a coming “civil war.” Now, a new study published by the Violence Prevention Research Program at the University of California-Davis reveals a growing acceptance in the United States of political violence, particularly among Americans who identify as partisan Republicans. The UC-Davis team conducted the most detailed study to date on the phenomenon. What their broad national survey reveals is troubling to say the least.

Approximately one-third of 8,620 respondents surveyed in early summer said that they considered violence to be “usually or always justified” to advance at least one among a list of 17 specific political objectives. This justification of violence was significantly more common among people who self-identified as “strong” Republicans than among those who identified as “strong” Democrats. Half of those strong Republicans endorsed such violence, compared with roughly a quarter of like Democrats.  (The “strong” label denotes the far ends of the partisan spectrum in the survey.)

The survey specifics reveal the ex-president’s influence: 12 percent of strong Republicans indicated support for violence as a means to “return Donald Trump to the presidency this year,” and 17 percent indicated the same to “stop an election from being stolen.” Strong Republicans were also more likely than strong Democrats to agree that “armed citizens should patrol polling places at election time” (14 percent versus 4 percent) and that violence may well be needed to “stop voter fraud” (17 percent versus 7 percent). Significant voter fraud is extremely rare in US elections and was in no way a factor in the 2020 presidential election.

The researchers also asked about the future role of firearms “in a situation where you think force or violence is justified to advance an important political objective.” Nearly 15 percent of strong Republicans said it was “very or extremely likely” that they will be armed with a gun in such a situation, while only 5 percent of strong Democrats said the same. Personal willingness to threaten or shoot someone with a gun was uncommon, the survey found, with no statistically significant variation by party affiliation. However, the small percentages of people who indicated they would personally engage in such violence represent—in absolute terms—disturbingly large numbers of American adults, the researchers observed.

Several veteran threat assessment experts I spoke with this month told me that they continue to see alarming levels of political extremism in threat cases, foremost driven by Trump’s rhetoric and the so-called ultra MAGA movement. “What we’re seeing is very concerning,” said a source who is also knowledgeable about ongoing Justice Department investigations of the January 6 insurrection. “The QAnon [conspiracy theory] garbage is all over the place, lots of talk about Trump taking back power, the need to fight the enemy and save the country—all that stuff.”

The experts noted that the violent threats on their radar, while heavily skewed to the far right, have become more broad-based. (The new research also reflects that spread.)

“I don’t get into the politics because that’s not my job,” one federal law enforcement agent told me, “but I remember a time when most members of Congress would never go after each other in such nasty or personal ways. They would reject that and say it’s wrong. I think the effect of that going away has been serious.”

The prospects for escalating violence are not difficult to imagine. Shortly after Trump and his allies went ballistic over the FBI search of Mar-a-Lago in August, a pro-Trump extremist in Ohio set out to attack an FBI field office and died in a shootout with police. Violent threats against members of Congress have risen to harrowing levels, particularly against women and lawmakers of color. The country saw the danger on a mass scale with the assault on Congress, which federal prosecutions later showed to be driven in large part by Trump’s incessantly rendered lie that the 2020 presidential election was fraudulent. In the nearly two years since the insurrection, multiple GOP leaders have adopted Trump’s style of potentially dangerous rhetoric, as I documented recently.

With midterm voting imminent, Trump keeps hammering away. This week, he shared a meme with his millions of followers on his Truth Social platform that depicted the Democratic Party as disgusting, evil, and degenerate. He included a thinly veiled call to arms: “It was during the Trump Administration that the ‘Deep State’ corruption, and pure hatred of our Country, was fully EXPOSED,” he wrote, adding, “something must now be done to rid us of this Cancer that is purposely destroying our Nation. There is far more danger from within than anything coming from the outside.”