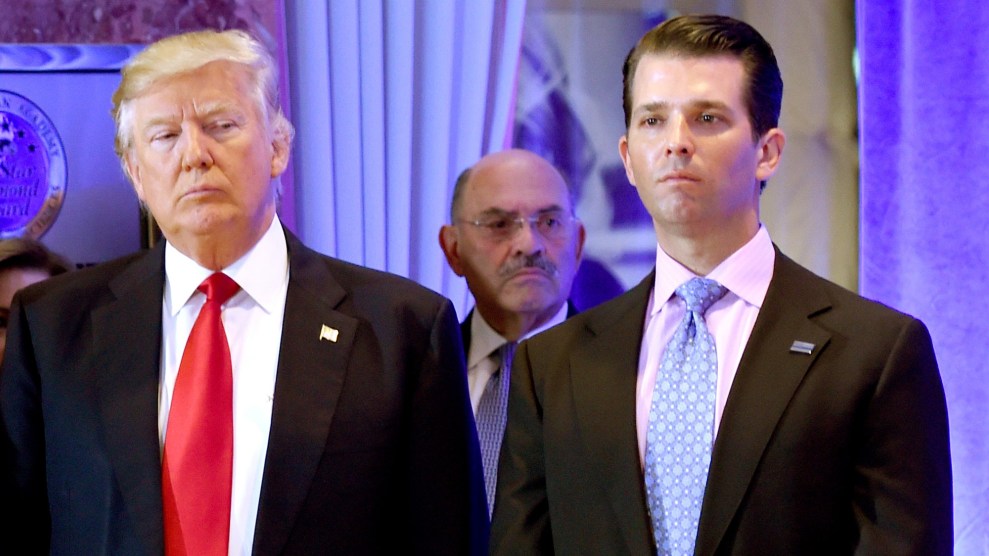 US President-elect Donald Trump along with his son Donald, Jr., arrive for a press conference at Trump Tower in New York, as Allen Weisselberg (C), chief financial officer of The Trump, looks on January 11, 2017Timothy A. Clary/AFP/Getty

On Monday, the Donald Trump’s embattled company, the Trump Organization, will go on trial.

New York prosecutors allege the former president’s firm was involved in more than a decade’s worth of “sweeping and audacious” tax fraud by providing untaxed benefits, such as luxury apartments and cars, to top Trump Organization executives, including the company’s longtime chief financial officer, Allen Weisselberg.

Weisselberg, who started working for the company in the 1970s, pleaded guilty in August to receiving over $1.7 million of untaxed benefits, such as a Manhattan apartment and multiple Mercedes vehicles. He will testify in the trial as a condition of a plea agreement requiring he pay roughly $2 million in taxes and penalties, and serve up to five months in jail at Rikers Island in New York City. Had he not submitted to the plea agreement, he could have faced up to 15 years in prison for grand larceny.

According to the criminal case spearheaded by Manhattan District Attorney Alvin Bragg, the company allegedly held two sets of books in order to conceal these untaxed perks. Two other company executives who have not been identified by name are also alleged to have received untaxed benefits, like car leases, according to the indictment.

“The purpose of the scheme was to compensate Weisselberg and other Trump Organization executives in a manner that was ‘off the books,'” the indictment states.

While the jury selection process is slated to begin Monday, it could take a while. Potential jurists will likely be asked whether they can set aside any personal political opinions about Trump to evaluate the evidence without bias. If the selected jury votes to convict the Trump Organization, the organization and its subsidiaries could be held liable for up to $1.6 million in fines.

Trump has condemned the case against his company as a “political Witch Hunt by the Radical Left Democrats.” Trump has not been charged in the case, though Bragg is reportedly continuing to investigate whether Trump inflated the value of his assets in order to obtain better loans.

New York Attorney General Letitia James has also filed a $250 million civil suit against Trump, three of his children, and Weisselberg for financial fraud. Her case contends that the Trumps failed to respond to discrepancies raised by Deutsche Bank about the value of the assets used to obtain loans from the financial institution and made it difficult for insurers to evaluate the family’s assets by only allowing them to review documents in person. As my colleague Russ Choma notes, “James outlines a whole series of allegedly fraudulent tricks the Trumps used, like using the wrong valuation method, or pretending rent-controlled apartments weren’t rent controlled.”

A court hearing on those civil charges is scheduled for October 31. At that point, it will be Trump, not his company, getting his day in court.