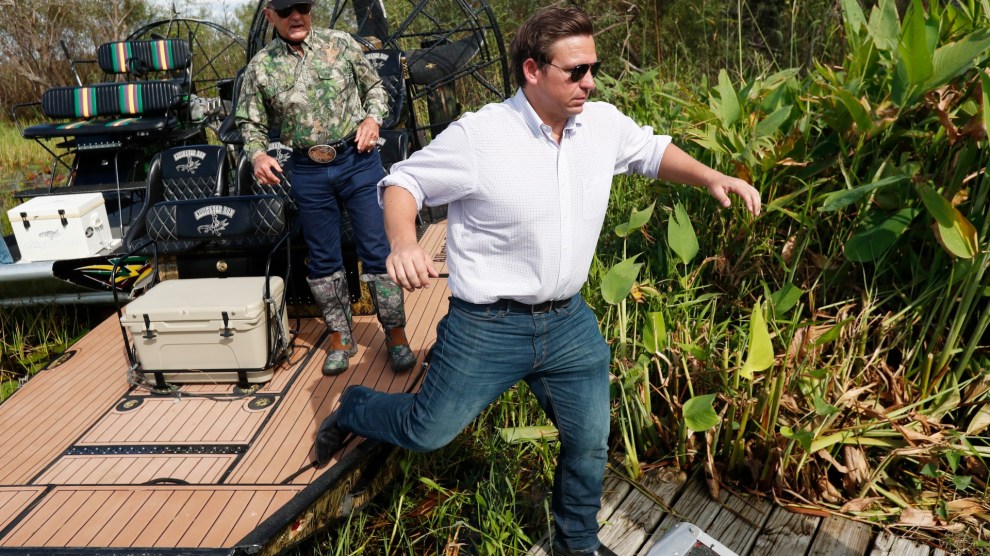 Then-candidate Ron DeSantis gets off an airboat with Gladesman and former Florida Fish and Wildlife Conservation commissioner Ron Bergeron after a tour of the Florida Everglades, Wednesday, Sept. 12, 2018, in Fort Lauderdale, Florida.Wilfredo Lee/AP

Just days before he took office in 2019, Florida’s newly elected governor published an op-ed in South Florida’s Sun Sentinel: “I will fulfill promises from the campaign trail,” it read. “That means prioritizing environmental issues, like water quality,” addressing toxic algal blooms, and putting Everglades restoration “into high gear.” The candidate, a self-described “Teddy Roosevelt conservationist,” had set his sights on cleaning up the Sunshine State’s water.

That candidate, of course, was Ron DeSantis.

At the time, clean water was top of mind for voters. “Red tide,” a toxic algal bloom in the Gulf of Mexico, had killed more than 2,000 tons of fish and other marine life, releasing a foul smell across coastal areas. As a candidate in 2018, DeSantis made promises to address the disaster, restore Florida’s iconic wetlands, and stand up to Big Sugar, an industry responsible for draining the nutrient-rich marshland south of Lake Okeechobee, a massive, 730-square-mile lake in South Florida.

Shortly after DeSantis took office, I wrote an article highlighting these commitments, and crediting him for not being the environmental disaster many Floridians, myself included, expected. Coming from a Republican candidate with an “abysmal” environmental record in Congress, DeSantis’ apparent change of heart seemed like a pleasant surprise.

Now, almost four years later, I realize I was wrong. I gave credit before it was due. While DeSantis, who is up for reelection on Tuesday against Democrat Charlie Crist, made a few notable first steps toward protecting Florida’s waterways, he is far from a “conservationist.” In reality, advocates say, he’s failed on a number of campaign promises, ignored the advice of his own experts, and at times signed legislation in direct opposition to his commitments.

“He’s basically abandoned all of the environmental promises that he made earlier in his career,” Jonathan Webber, the political and legislative director for Florida Conservation Voters, an environmental advocacy group, tells me. “We saw Governor DeSantis take a really hard right turn into culture war politics, just fighting every one of Donald Trump’s culture war battles, and inventing new ones. That has really been the dominating story out of Tallahassee the past couple of years.” (I should disclose here that my mom is part of a legal team that sued the DeSantis administration over access to public records related to the governor’s controversial decision to fly migrants to Martha’s Vineyard.) In hindsight, I see that praising DeSantis for his environmental commitments was a bit like praising a child who manages to eat one bite of vegetables at dinner.

At the start of DeSantis’ term, there was good reason to be optimistic. As I wrote in 2019, during DeSantis’ first week in office he signed an executive order calling for a number of environmental actions, including directing $2.5 billion for Everglades restoration over four years—the highest level of funding for the effort in the state’s history, according to the governor’s office—and convening a task force to reduce “the adverse impacts of blue-green algae blooms now and over the next five years.”

By the fourth month of his term, he appointed a chief science officer, Thomas Frazer, who was then the director of the University of Florida’s School of Natural Resources and Environment, to lead the state’s the newly created Office of Environmental Accountability and Transparency. Frazer had studied water ecosystems and did, notably, accept the science of climate change, a topic DeSantis had avoided addressing as a candidate. (Frazer quietly stepped down in 2021 and has been replaced by Mark Rains, a professor in the school of geosciences at the University of South Florida.)

He also took steps to stand up to Big Sugar. Early in his tenure, DeSantis replaced all nine board members of the influential South Florida Water Management District, one of five regional water management boards in the state. The board had voted, against DeSantis’ urging, in favor of sugar growers to extend a lease on land that otherwise would have been used for a wetland reservoir, prompting DeSantis to call for their resignations. “Prior to DeSantis’ tenure, that board was dominated by interests that aligned with the sugar industry,” Gil Smart, executive director of VoteWater, a group that advocates for clean water policies and candidates, told me. “That was a huge difference.” In 2022, the governor vetoed a bill that was, in part, “a giveaway to the sugar industry,” according to Smart, a move celebrated by environmental groups.

And by the summer of this year, DeSantis had approved $3.3 billion for Everglades restoration and water management—surpassing his initial commitment of $2.5 billion in 2019. Because of what he’s done for the Everglades, said Smart, “DeSantis has some friends in the conservation movement down here.” One environmental group, the Everglades Trust, for instance, endorsed DeSantis in 2018, and has endorsed him for reelection. (The Everglades Trust did not respond to my interview request.)

Compared to his predecessor, Gov. Rick Scott, who scientists allege banned his Department of Environmental Protection from using the words “climate change” or “global warming” in official communications, DeSantis seemed to offer a breath of fresh air. “It’s not that hard to raise the bar when your predecessor has left it on the ground,” Florida Rep. Evan Jenne, a Democrat, told me in 2019. “All he had to do was just lift it a little bit and he was going to be a better environmental governor.” In March of 2019, DeSantis boasted a 59-percent approval rating, the highest of any Florida governor in the previous 10 years, according to the Quinnipiac University Poll, in part because of his stance on the environment, pollsters speculated.

Well, it turns out, that breath of fresh air was actually hot air—and DeSantis was full of it, advocates argue. Before the end of his first year in office, DeSantis’ own Blue-Green Algae Task Force delivered a set of 31 recommendations to restore Florida’s waterways, including things like water quality monitoring and mandatory public health notifications. But by 2022, just four of those recommendations had been implemented, according to a coalition of environmental groups in the state. After three years, that’s “not good enough,” Webber said, “when it’s his idea to begin with.”

DeSantis has also taken several anti-environment legislative actions, according to the Sierra Club Florida chapter, which has given DeSantis a D- rating for his time in office. He signed bills that blocked coral reef protection in Key West, prevented local electrification initiatives, defined natural gas as “renewable energy,” lowered regulatory hurdles for developers, and made it harder for residents to take legal action against health-threatening activity by Big Sugar, like sugar cane burning. In 2019, he signed SB 7068, a bill that authorized the construction of more than 300 miles of new highways across undeveloped land. The decision proved so unpopular that in 2021 he signed another bill reversing the plan.

And, advocates argue, DeSantis’ efforts on Everglades restoration don’t go far enough. For Smart, it’s simply a matter of land; to protect Florida’s waterways from toxic algal blooms in the long term will require investment in wetlands and reservoirs to filter water coming out of Lake Okeechobee, he said. “We still need significantly more acreage and Charlie Crist is the only one talking about that.” (VoteWater, the Sierra Club Florida chapter, and Florida Conservation Voters have endorsed Crist, who they say is better prepared to take on Florida’s water issues.)

In 2020, DeSantis signed a massive water bill that he dubbed the “Clean Waterways Act.” But many of the measures within it, although positive steps, Webber said, require future legislatures to implement. “It didn’t actually move the needle as far as anyone was expecting or hoping it would for water quality.” And when the state saw an alarming die-off of manatees in 2021 as a result of poor water quality, DeSantis decided to “throw some money” at manatee feeding programs, Webber said, but didn’t make enough of an effort to address the cause of the die-off: water pollution. “To not make a policy change is, I think, negligent.”

“Every single time he’s taken action, he’s come up short,” said Luigi Guadarrama, the political director at the Sierra Club’s Florida chapter. “If it’s funding for the Everglades, it’s not enough. If it’s creating the Blue-Green Algae Task Force, he then turns around and ignores all of their recommendations. It’s a lot of—frankly, he produces a lot of filler.” (DeSantis’ campaign and administration did not respond to requests for comment from Mother Jones.)

And when it comes to tackling climate change, DeSantis has taken an indirect approach. He’s opted to talk about “resiliency,” rather than combat the drivers of global warming, which he’s referred to as “left-wing stuff.” In 2021, DeSantis signed the bipartisan Resilient Florida Program, a bill that would direct hundreds of millions of dollars to protect waterways and coastlines and help “prepare communities for the impacts of climate change.” “People, when they start talking about things like ‘global warming,’ they typically use that as a pretext to do a bunch of left-wing things that they would want to do anyways,” DeSantis said last year. “We’re not doing any left-wing stuff. What we’re doing though, is just reacting to the fact that okay, we’re a flood-prone state.”

Preparing the state to adapt to a changing climate, without trying to stop it from happening in the first place, is a form of “greenwashing,” environmentalists argue. “It’s misleading to voters,” Webber said.

It’s unclear how much DeSantis’ environmental legacy (or lack thereof) has influenced voters. While polling suggests a majority of Floridians would like DeSantis to do more to address sea level rise and protect the Everglades, surveys also show DeSantis with a significant lead over Crist, pointing to a likely DeSantis victory. Issues like abortion, inflation, and the culture wars have taken center stage this election, while the environment has been plopped on the back burner. During the state’s one and only gubernatorial debate, for instance, questions about the environment were disappointingly absent, Smart noted. But with three out of four Floridians living on the coast, it’s only a matter of time before water resurfaces in Florida’s politics. “These are issues that are going to come back to bite us,” Smart said. “If there’s one constant in Florida, it’s that the next water crisis is right around the corner.”

And when that happens, DeSantis will be expected to answer for it. As he wrote in his 2019 op-ed, “Campaigns fade from view, but the real issues we must tackle are in front of us…After all, this is our time and our children are watching.”