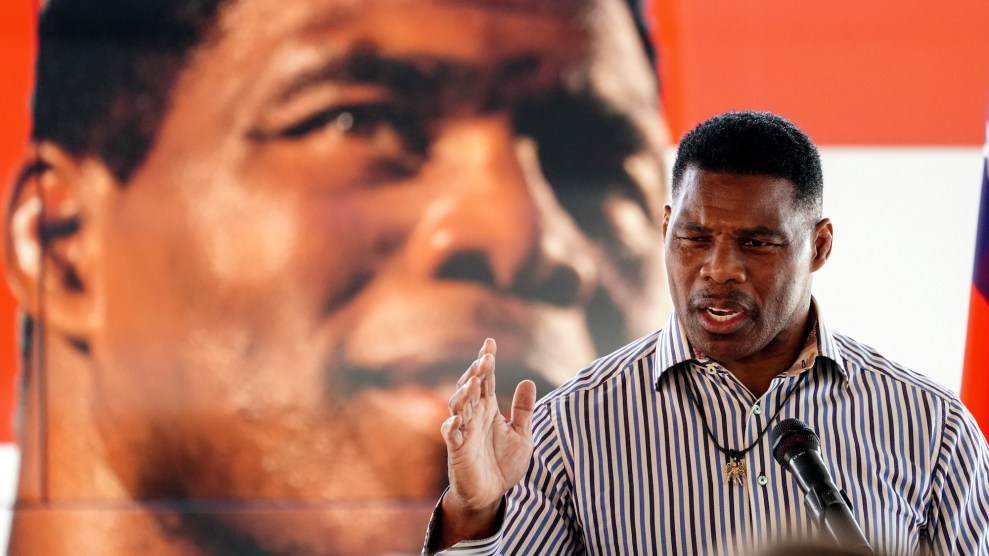 The second woman to allege that football star-turned-Republican Senate candidate Herschel Walker pressured her to have an abortion amid an affair told her story in more detail on Tuesday, saying that Walker had told her she and the child would “not be safe” if she went through with the pregnancy.

“I felt threatened and I thought I had no choice,” the woman—who has been identified only as Jane Doe—said in an on-camera interview with ABC News. She alleges Walker gave her cash to pay for the abortion, but that she decided not to go through with it after seeing ultrasound images of the fetus at her clinic appointment in 1993. The next day, she alleges, Walker personally drove her back to the clinic, waiting in the parking lot for her to finish the procedure. “[Walker] was very clear that he did not want me to have the child,” Doe told ABC News co-anchor Juju Chang. “And he said that because of his wife’s family and powerful people around him that I would not be safe and that the child would not be safe.”

Walker—who supports banning abortion with no exceptions, not even to save the life of the mother—denied Doe’s allegations last week, after she first aired them at a press conference with her lawyer Gloria Allred. ‘”I’m done with this foolishness,” Walker said. “This is all a lie, and I will not entertain any of it.” Doe is the second woman to say that Walker had paid for her to have an abortion. In October, the Daily Beast reported that a woman identifying herself as Walker’s ex-girlfriend had sought an abortion after conceiving with Walker in 2009—and that she had kept a receipt from the abortion clinic, a “get well” card from Walker, and a bank deposit slip with an image of the check that he had apparently signed. Walker denied that story too, and threatened to sue the Daily Beast for reporting it (such a suit has not materialized).

Jane Doe’s allegations, which Mother Jones has not independently corroborated, have shaken up the final weeks of his neck-and-neck Senate race with incumbent Raphael Warnock—one of a small handful of contests that will determine whether Democrats or Republicans control the Senate come January. Yet stories of abusive and threatening behavior have followed Walker since before his campaign. His ex-wife, Cindy Grossman, has long said that Walker had threatened to kill her during their marriage, at one point holding a razor to her throat and, in other incidents, a gun to her temple. CNN reported this fall that in 2002, one woman reported to Texas police that Walker threatened and stalked her; in 2012, another woman who says she was romantically involved with Walker reportedly told Texas police that he had threatened to kill her. Walker has said he doesn’t remember acting violently toward Grossman—chalking it up blackouts resulting from his dissociative identity disorder—and has denied the other two allegations.

Aside from the timing of these revelations, the allegations against Walker might seem like two separate issues—like Walker was both a sleazy philanderer and an abusive partner. But Tonya Lovelace, an expert on intimate partner violence who has consulted with the NFL, sees a through-line between the allegations of threatening behavior and the claims that Walker pressured women into having abortions. “I see these all in the same thread,” Lovelace says. “Ongoing, coercive, violent, abusive behavior with women.”

Lovelace pinpoints the abortion stories as examples of “pregnancy pressure,” which the National Network to End Domestic Violence considers a form of “reproductive coercion.” Essentially, pressuring an extra-marital partner to end her pregnancy is on the continuum of abuse. To Lovelace, the allegations would indicate that Walker was “not someone who was beyond using power and control to get his point across with women.”

The American College of Obstetricians and Gynecologists uses the phrase reproductive coercion to describe “explicit attempts to impregnate a partner against her will, control outcomes of a pregnancy, coerce a partner to have unprotected sex, and interfere with contraceptive methods.” One 2018 survey found that among sexually active high school girls, about 1 in 8 had experienced behavior that amounted to reproductive coercion, such as condom removal during sex. According to Planned Parenthood, it often goes hand in hand with other kinds of intimate partner violence.

Crucially, the idea of “reproductive coercion” applies equally to someone who is forced to keep an unwanted pregnancy—or who is impregnated against her will—as it does to the person compelled to get an abortion that she doesn’t want. Either way, the individual is robbed of choice. And, says Lovelace, Walker’s public denials could be seen as a continuation of abuse: “At best, it’s gaslighting. At worst, it is verbal violence.”