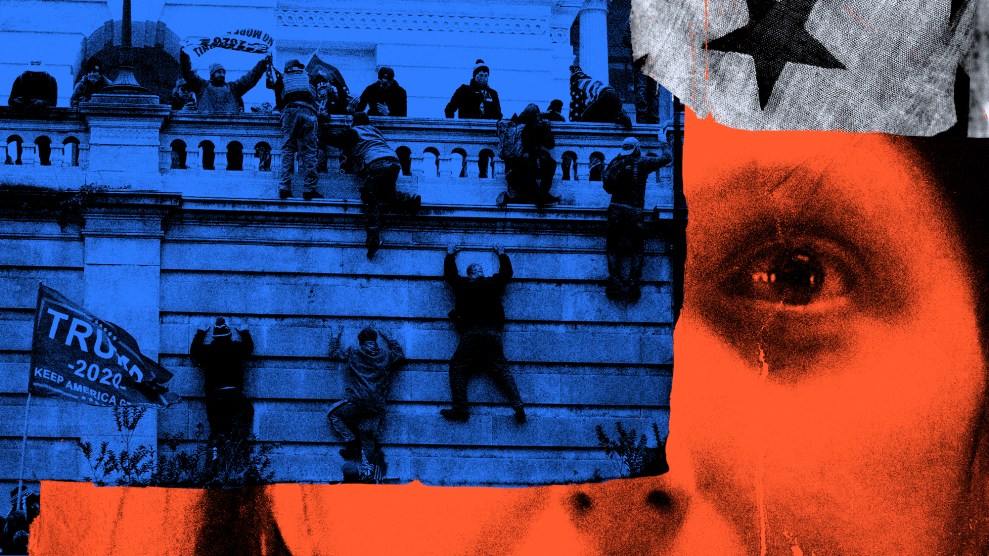 Jessica Watkins, an Oath Keeper charged with seditious conspiracy, struggled Thursday under cross examination by prosecutors—at one point shouting that the 2020 election had been stolen from Donald Trump.

“Half this country feels this way still,” Watkins said after she was pressed about her role in a confrontation with police inside the Capitol on January 6. “Half this country still feels disenfranchised by that election…We didn’t have a free and fair election. And that is not rhetoric.”

Those words may have torpedoed Watkins’ defense. Taking the stand in a surprise move Wednesday, she testified about her personal struggle as a trans woman, and said she wanted to apologize to a police officer who was among those she and other Oath Keepers had clashed with in a Capitol hallway during the riot. Watkins also attributed her past belief in various wild conspiracy theories tied to the 2020 election—such as her fear that United Nations troops would invade the United States to forcibly dispense Covid vaccines if Joe Biden took office—to her “steady diet of InfoWars.”

Watkins admitted to some of the actions for which she now faces criminal charges, including impeding police officers, all but ensuring her conviction on that count. But her apparent bet was that jurors might be more likely to acquit her on more serious charges such as seditious conspiracy—which can carry a prison term of up to 20 years—if they found her sympathetic.

Her outburst Thursday about the 2020 results surely complicated that strategy. Watkins may have renounced some conspiracy theories, but she gave jurors an unprompted demonstration that she has not abandoned a big one that drove the January 6 attack. And her anger likely undermined her expressions of remorse.

Watkins grew upset as assistant US Attorney Alexandra Hughes picked apart claims Watkins had made on the stand a day earlier. Watkins had testified that when she stormed the Capitol, she believed that Vice President Mike Pence and the Senate had already certified Biden as the election winner. That would counter the government’s allegation that Watkins was trying to stop the certification, a key element the Justice Department needs to prove to convict her of seditious conspiracy.

But Hughes played recordings from the walkie talk app Zello—which some Oath Keepers used to communicate on January 6—in which Watkins acknowledged communications in which other Oath Keepers noted that the proceedings were not over, but had instead been interrupted by the attack. “The Patriots are coming in…Those motherfuckers. Patriots got in and were screaming and they recessed,” another user said at 2:28 pm that day. (Watkins claimed Thursday she had been listening only sporadically to the transmissions and said she didn’t recall that particular transmission.)

Watkins had also claimed Wednesday that she had not initially seen any violence at the Capitol and described the scene she saw as festive and patriotic. “It was a cool moment,” she said.

Hughes cited that statement, and contrasted it with video footage in which Watkins had urged other rioters to “push” against police officers attempting to block a hallway. That’s when Watkins begin losing her composure on the stand. She noted she had already expressed regret, seemingly irked that her admission had not dissuaded prosecutors from showing the clip. “If you want me to say it a few more times, I will,” Watkins said. “I accept full responsibility for what happened in this hallway. I know that it opens me up to criminal liability.”

Watkins was the third of five Oath Keepers on trial who chose to take the stand in their own defense, an unusually large number. The others—Oath Keepers founder Stewart Rhodes and Thomas Caldwell, an associate of Watkins’—also struggled under cross-examination.

Prosecutors and defense attorneys are expected to make closing arguments over the next few days.