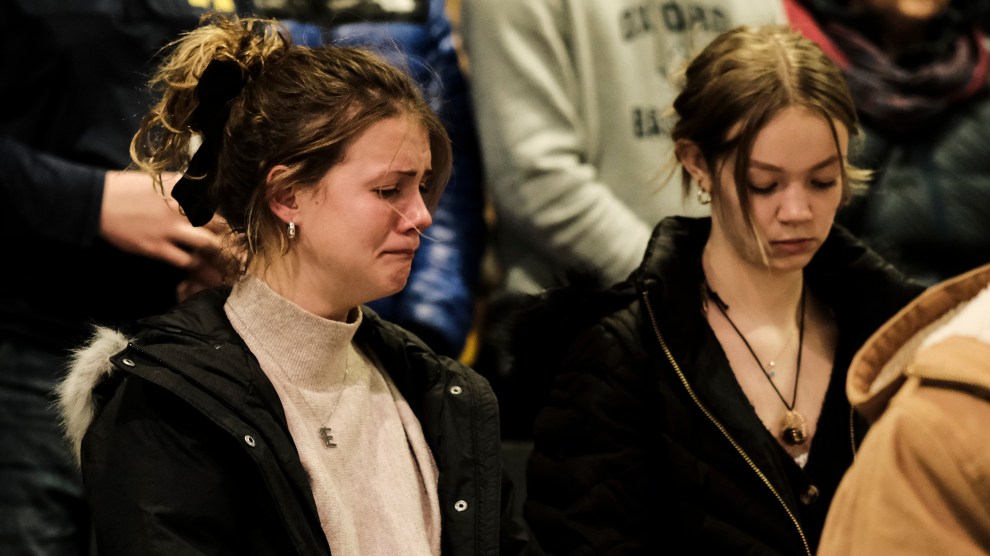 A vigil for shooting victims in Oxford, Michigan, on November 30, 2021Matthew Hatcher/Getty

In the year since a mass shooting at Oxford High School in Michigan left four students dead and many others injured and traumatized, questions have loomed about whether the carnage could have been prevented. The most intense media focus has been on the role of the shooter’s parents. They bought a semiautomatic pistol for their deeply troubled son just days before the attack, allegedly ignored warning signs and rebuffed concerned school officials, evaded law enforcement in the immediate aftermath, and now face unprecedented manslaughter charges in a trial scheduled to begin early next year.

But big questions also remain unanswered about how the school system handled 15-year-old Ethan Crumbley, who pleaded guilty in October to 24 criminal counts, including murder and terrorism. In a dramatic development on Monday, two recently departed members of the district’s board—former president Tom Donnelly and former treasurer Korey Bailey—said that they resigned in September over the handling of a board-approved independent investigation into the attack and what led up to it. The two alleged stonewalling involving the district’s own legal counsel, amid a flurry of pending civil lawsuits against the school district and several of its employees.

“A year later, we are frozen in time when it comes to the facts” of the tragedy, Donnelly said during a nearly hourlong press conference.

Their starkest revelation, however, was that the school district had long ago adopted a threat assessment policy for preventing violence—but never used it. Donnelly and Bailey further described that they didn’t find out until nine months after the mass shooting about the existence of that policy, which was based on federally developed protocols for school systems. “This document changed everything from my perspective,” said Donnelly, particularly as the school district continued messaging to the community that it had done everything possible before the attack to keep the schools safe.

According to Bailey, the threat assessment policy, which lays out a collaborative team approach to evaluating and managing potentially dangerous behavior, was first established by the Oxford school system in 2004. It was updated “several times over the years,” he said, including most recently in June 2021, about five months prior to Crumbley’s lethal rampage.

“The district certainly didn’t use it as designed in the months leading up to the shooting,” said Donnelly. “There’s no evidence that we’ve ever used it as it is designed.”

According to the New York Times, the Oxford school district maintains that the independent investigation is moving forward, with the purpose of bringing transparency and accountability. A law firm associated with the district’s insurance carrier said in a statement to the Times that “multiple staff members received threat assessment training before the Nov. 30 tragedy” and that “many of the former board members’ allegations show a misunderstanding of the facts.”

Court documents and testimony made clear by last spring that Crumbley gave off numerous warning signs for months before he opened fire. Through various threatening communications, he signaled his suicidal despair and rageful intent to kill, including in the final days beforehand. Had the school system been operating an adequate threat assessment program, it may very well have been possible to detect the danger and intervene before it was too late, as I detailed in a story in April:

When prosecutor Karen McDonald announced murder and terrorism charges, she cited “a mountain of digital evidence” showing premed­itation and planning by accused shooter Ethan Crumbley…The evidence includes an ­Instagram post where he boasted about the Sig Sauer pistol he used, and a drawing discovered by a teacher the morning of the attack in which the teen depicted a shooting and wrote, “My life is useless,” “Blood everywhere,” and “The thoughts won’t stop. Help me.”

These were textbook warning signs of both a youth in despair and an escalating plan for violence, according to Marisa Randazzo, a former chief research psychologist for the Secret Service who contributed to a landmark study of school shooters after Columbine in 1999. “We know and can help a student who is struggling like this,” she told me. “This is particularly heartbreaking, because this is a case where a trained threat assessment team would be able to do a lot.”

As my reporting further documented, there was a catastrophic lack of information-sharing regarding Crumbley’s concerning behaviors—a pervasive problem in the history of school shootings and a core failure that the field of threat assessment seeks to remedy. Here that failure culminated in a meeting at the school involving two school officials, Crumbley, and his parents on the morning of the attack, after which Crumbley was allowed to return to class.

A jury will determine whether his parents could have possibly known that he had a gun and ammunition in his backpack and was prepared to kill. The school officials never asked about whether he had access to a weapon or sought to inspect his belongings, according to the former superintendent serving at the time.

Donnelly and Bailey alleged on Monday that the district has withheld other potentially crucial details. According to the Detroit Free Press, they said those include the results from a behavioral-risk survey that Crumbley took as a freshman and again as a sophomore—just months before the shooting—that is designed to help educators identify social-emotional and behavioral problems in students.

One certainty about the Oxford High case is that a painful picture of missed opportunities will continue to come into view. That is virtually always the case amid the broader ongoing national crisis of school and mass shootings. The hope now is that the accumulating knowledge from those many lessons learned can bring about the kind of broad-based change that is necessary to contend with the complex reality of this epidemic.

Or, as Donnelly put it to the Free Press, “If Oxford Strong means anything, it has to be more than just enduring the pain. It has to include being able to handle the truth.”