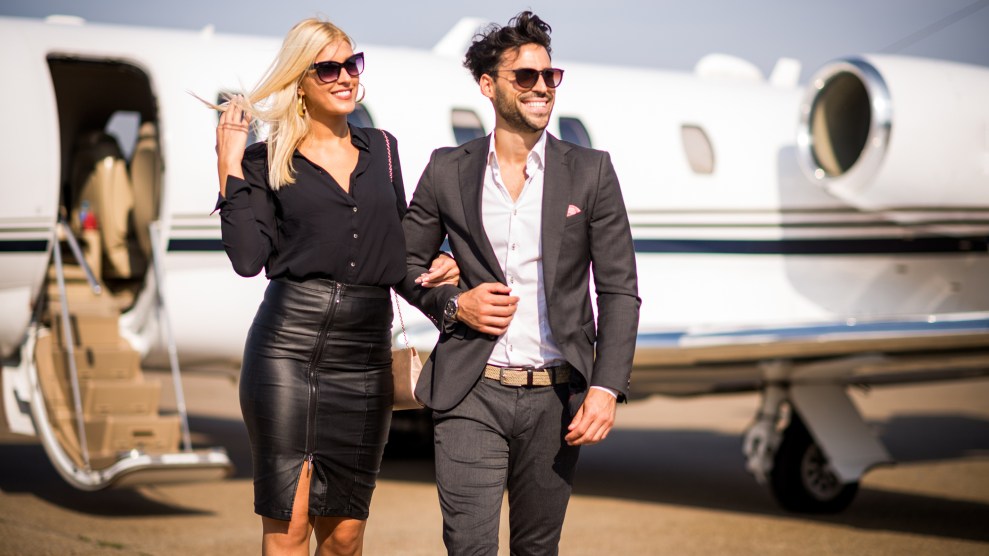 The top 1 percent of earners in the UK are responsible for the same amount of carbon dioxide emissions in a single year as the bottom 10 percent emit over more than two decades, new data has shown.

The findings highlight the enormous gaps between what have been termed “the polluting elite,” whose high-carbon lifestyles fuel the climate crisis, and the majority of people, even in developed countries, whose carbon footprints are far smaller.

It would take 26 years for a low earner to produce as much carbon dioxide as the richest do in a year, according to Autonomy’s analysis of income and greenhouse gas data from 1998 to 2018, which found that people earning £170,000 or more in 2018 in the UK were responsible for greenhouse gas emissions far greater than the 30 percent of people earning £21,500 or less in the same year.

The period covered by the dataset ends in 2018, before the Covid-19 pandemic and lockdowns, which disrupted high-carbon activities such as flying.

“Our analysis suggests that the most effective way for the government to tackle climate change would be to properly tax the rich.”

Autonomy also found that if the UK had started taxing carbon emissions from just the top 1 percent of income groups two decades ago, the effort could have raised about £126bn by now, which could have gone towards reducing greenhouse gas emissions in an equitable way, for instance through home insulation for poorer households.

Peter Newell, professor of international relations at the University of Sussex, who was not involved in the Autonomy report but has worked extensively on the “polluting elite”, told the Guardian the massive gap should be addressed.

“‘This new report on the benefits of taxing extreme carbon emitters makes for shocking reading,” he said. “On the eve of a critical climate summit [Cop27] in Egypt, and staring down an unprecedented cost of living crisis, it is clear we are not all in this together. Revenue raised from a carbon tax on the wealthiest top 1 percent of the population would have raised enough money to retrofit nearly 8 million homes, keeping us warm this winter and bringing down fuel bills, while providing critical support for renewable energy and making us less dependent on Putin’s gas.”

The UK is not alone in having such a gulf between high and low earners on greenhouse gas emissions. A growing body of research points to the existence of a “polluting elite” whose lifestyles bear little relation to those of the majority of people. This holds true in developed and developing countries, where the poorest tend to be responsible for a tiny amount of greenhouse gas emissions, while those with most wealth are comparable in their impact with the elite of rich countries.

For instance, in any given year, fewer than half of people in the UK take a flight. But 1 percent of people are responsible for one-fifth of the overseas flights taken from the UK.

Flying, driving large, expensive cars, owning multiple homes and traveling between them, eating a diet rich in meat and imports, buying more clothes and imported luxury goods are all reasons for the richest generating far higher carbon footprints. Poorer people tend to stay closer to home in small houses and use public transport, while their expenditure on luxuries and items such as “fast fashion” is much smaller.

Will Stronge, director of research at Autonomy, said: “The enormous release of carbon emissions by the very richest in society over the past few decades is astonishing. Our analysis suggests that the most effective way for the government to tackle climate change would be to properly tax the rich, through a well-targeted carbon tax scheme.”

Taxes on the most polluting activities could target only the rich and need not add to the cost of living crisis for the great majority of people. They could also help to plug the yawning gap in the UK’s public finances.

However, the government has preferred to reduce taxes on activities such as flying and driving, despite their environmental impact.

Stronge said the actions taken by most people, such as turning off lights to save energy, would “make no difference if the government doesn’t address the fact it’s the rich who are disproportionately responsible for the climate crisis”.

Adrian Ramsay, co-leader of the Green party, said: “Last year, the Green party called for the UK to show genuine global leadership by introducing a carbon tax at Cop26. As this report demonstrates, such a tax could be a key lever in driving the transition to a cleaner and greener economy.

“But it is also only fair that the top 1 percent of UK earners, who are disproportionately responsible for such a large amount of the UK’s greenhouse gas emissions, pay a wealth tax. A modest tax on the wealthiest 1 percent of households could raise in the region of £70bn and be used to contribute significantly to funding a nationwide home insulation program, creating warmer, more comfortable homes and bringing bills down for good. Such a tax will particularly benefit the poorest 10 percent, who are the least responsible for the UK’s carbon emissions.”