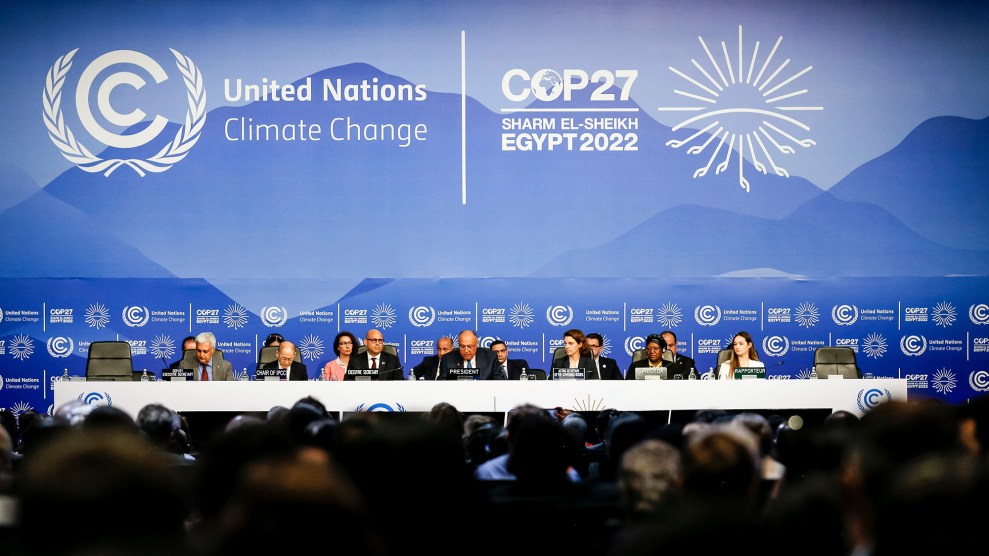 For Joe Biden, the United Nations climate summit in Egypt is the crowning stage to trumpet the US finally passing major legislation to slow dangerous global heating. But the thoughts of the US president and delegates from around the world are likely to nervously flit to events 6,000 miles away—knife-edge midterm elections back in America.

The climate talks, known as Cop27, begin in earnest on Monday when more than 90 heads of state convene in Sharm el-Sheikh amid warnings from scientists that the world is heading towards disastrous climate breakdown without further, deeper cuts in planet-heating emissions. António Guterres, secretary general of the UN, has warned governments heading to Egypt that they face “economy-destroying levels of global heating” and that their efforts to stem this disaster is falling “pitifully short.”

Biden’s administration is aiming to enter Cop27 in a mood of determined optimism, officials have said in briefings, having successfully secured passage of the landmark Inflation Reduction Act thanks to Democratic votes in Congress over the summer, a $370 billion package to boost clean energy that is the first significant climate bill ever enacted by the United States.

“If the results go against the Democrats…there will be question marks over how much the US can follow through on climate.”

But the White House’s attempts to portray the US as an empowered standard-bearer of climate action risks being undermined just a day into the conference, with midterm elections on Tuesday potentially shifting control of Congress to Republicans, sharply critical of what they call the president’s “radical green agenda.”

Biden will arrive in Sharm el-Sheikh on November 11, shortly after the midterm election, but likely before the full results of the vote. The prospect of the president’s program being partially unpicked by Republican gains would dampen hopes of further progress from the world’s largest historical emitter of greenhouse gases.

“Everyone at Cop27 will be watching the US election and will be trying to understand what it means, it will affect the overall tenor of the talks,” said Nathan Hultman, a climate policy expert who was part of the US’ negotiating team at last year’s Cop26 talks in Scotland.

“We have this strong, transformational body of work from Congress which has completely changed the narrative on the US. We are in a good position to reach our emissions reduction target, but obviously it is harder if elections don’t go to plan.”

The US has been a hugely influential yet unreliable actor during the climate crisis, with its unusually partisan politics leaving leaders of other countries to nervously watch American elections for sharp swings in climate policy. “The US will arrive with a good message to tell that it is a leader on climate, but the political winds can quickly change,” said Alice Hill, a former advisor to Barack Obama, now climate expert at the Council on Foreign Relations.

“If the results go against the Democrats we are unlikely to see more climate legislation and there will be more legal challenges to actions taken by the Biden administration. There will be question marks over how much the US can follow through on climate.”

John Kerry, Biden’s climate envoy, has remained bullish over the prospects of using American influence in Egypt. Scientists have warned that the world remains badly off track to avoid disastrous climate change, with emissions reduction pledges to date delivering a likely 2.5 C (36.5 F) in global heating, over pre-industrial times, which is well beyond the internationally-agreed ‘safe’ limit of 1.5 C (34.7 F).

“No country has a right to be delinquent in not putting up an NDC (a nationally determined contribution to cut emissions), not strengthening it where they can, and not being part of this effort,” Kerry said in a recent briefing with journalists, adding that “everybody needs to do their part here” and he wants “to make sure that everybody understands we’re doing the things necessary to keep 1.5 C alive.”

“We recognize the key role of the US in these climate talks,” but “We cannot rebuild houses with words.”

Kerry is likely to come under pressure at Cop27 from developing countries unhappy that a promised $100 billion a year from rich countries in climate finance has yet to be delivered, as well as on the issue of loss and damage, which would provide poorer nations a form of compensation from floods, heatwaves, droughts and other impacts they did little to cause themselves.

A group of 143 climate groups have written to Kerry to criticize the US’s “recalcitrant” stance on loss and damage, demanding progress on the issue in Egypt. “The United States has stood in the way over the loss and damage facility, and countries that are suffering right now are still demanding that facility,” Vanessa Nakate, a Ugandan climate justice activist, said recently. “I need to see the United States helping those that are suffering right now.”

Delegates from less wealthy countries say they are almost at their wits’ end over the lack of progress on damages paid by the US and others. “We recognize the key role of the US in these climate talks and we congratulate their steps to taking leadership in the fight against climate change domestically,” said Madeleine Diouf Sarr, a Senegalese official who is chair of the Least Developed Countries, a negotiating bloc of 46 nations.

But Sarr added that “we are reaching the point where our patience with hearing the same old arguments is over. Now, look around the world to see all the devastation that could not be adapted to. It is simply obvious that climate change outpaces our abilities to perfectly prepare for it. We cannot rebuild houses with words.”

US negotiators have said they are open to discussing the idea at Cop27, but are wary of opening up any sort of liability that could be imposed upon America. Kerry said he wanted “serious dialogue” over loss and damage but has not committed to any form of deal. Regardless, Republicans would likely try to scupper any attempt at providing any sort of new climate aid to developing countries, should the GOP prevail in the midterms.

“Biden still has two years left in his term and there are now strong regulations in place that will be sticky and help nudge the existing momentum on renewable energy and electric cars,” said Hultman. “Depending on that momentum, the outcome of the election may not be hugely consequential. But we will have to see how things lie after November 8.”

Democrats, meanwhile, are not only fretting over their electoral prospects going into Cop27 but are questioning the setting of the talks themselves, given Egypt’s dismal human rights record. “Egypt was the wrong choice for Cop27,” said Don Beyer, a Democratic congressman who has called on Kerry to raise human rights issues with the Egyptian government. “Its government jails environmental and political activists and treats NGOs as a threat.”