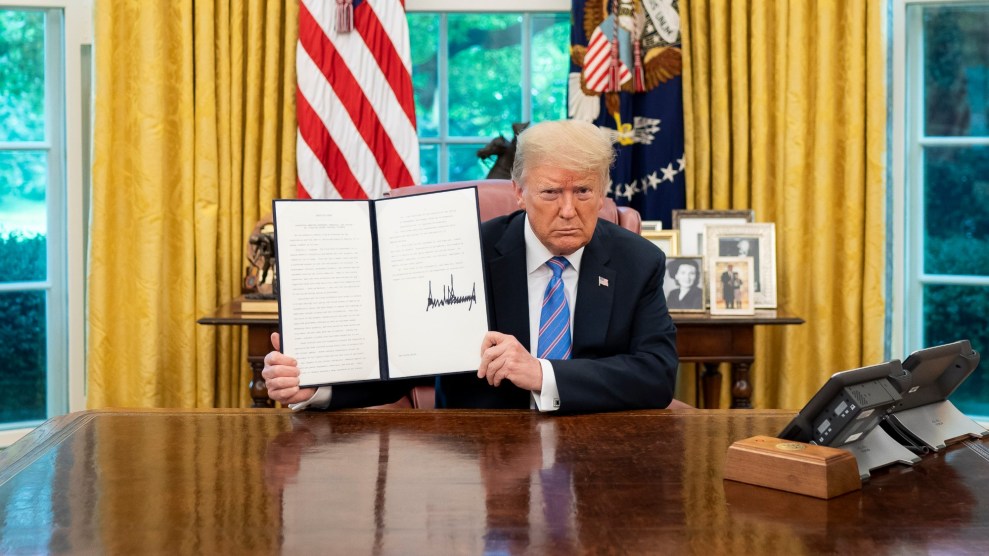 “Attorney General Barr is weighing in on that with [acting Homeland Security] Secretary [Chad] Wolf, and you’ll see something rolled out this week, as we start to go in and make sure that the communities—whether it’s Chicago or Portland or Milwaukee or someplace across the heartland of the country—we need to make sure their communities are safe,” Meadows said.

President Trump is committed to standing up to the radical mobs that want to tear down our communities. “Some of the unrest we saw… it’s just not acceptable.”

This is about keeping our communities safe! pic.twitter.com/TV1CpgUfZV

Trump’s critics say he is deploying armed federal officers to cities in an effort to help his reelection effort. The Trump campaign lent support to those claims Sunday by gleefully tweeting out Meadows’ comments.

Meadows referred to the ongoing federal presence in Portland, Oregon. There—in defiance of requests by local officials—the Homeland Security Department and the US Marshalls Service are claiming authority to police Black Lives Matter protests and to make arrests. In Portland, Border Patrol teams have detained people, and federal agents have reportedly used tear gas against protesters. (Protesters have alleged Border Patrol officers failed to clearly identify themselves when making arrests, though the agency disputes that.)

The Feds justify their presence in Portland by citing a June 26 executive order in which Trump directed them to protect statues, monuments, and federal property. They say they are protecting the Hatfield Federal Courthouse and other federal property in the city. The Border Patrol also says its agents are deputized to help the Federal Protective Service guard federal facilities, a role that the DHS secretary has statutory power to give them.

But Meadows suggested the Trump administration wants to broaden its legal justification to allow federal agencies to expand their presence in other locations. Notably he cited Chicago, where the issue drawing national attention is gun violence, not political unrest. Trump has previously threatened to “send in the Feds” if Chicago “doesn’t fix the horrible ‘carnage’ going on.”

“The statues are one thing, but it’s really about keeping out communities safe, and the president is committed to do that,” Meadows said.

These plans are sure to draw condemnation from Democrats and other Trump critics already denouncing the administration’s actions in Portland. On Sunday, the chairs of three House committees—Judiciary, Oversight and Homeland Security—asked inspectors general in the Justice and Homeland Security departments to investigate the “use of federal law enforcement agencies by the Attorney General and the Acting Secretary of Homeland Security to suppress First Amendment protected activities in Washington, DC, Portland, and other communities across the United States.”