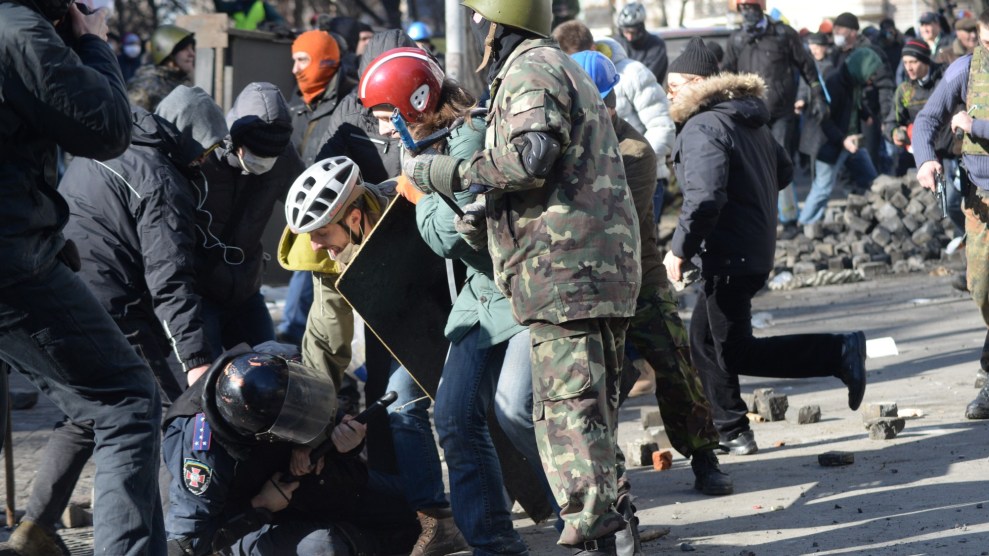 A police officer attacked by protesters during clashes in Ukraine, Kyiv on February 18, 2014Mstyslav Chernov/Wikimedia Commons

President Donald Trump is trying to boost his reelection chances by highlighting his efforts to use federal officers to crack down on what he claims is lawlessness in US cities. This week, his campaign ran a Facebook ad that showed protesters attacking a police officer. The words “chaos & violence” appear under the photo, a suggestion that Trump will stop such actions.

But the image is not from a protest in an American city. It is from Kyiv in 2014, part of the so-called Maidan Revolution against former Ukrainian President Viktor Yanukovych’s pro-Russian policies. Yanunkovych was eventually forced out. He fled to Moscow—but not before exacting a bloody toll. His effort to suppress the uprising resulted in the deaths of an estimated 130 Ukrainians. Most were protesters killed by troops deployed by Yanukovych. More than 30 deaths were reported during demonstrations on February 18, 2018, the day the photo was taken.

Yanukovych was accused of extensive corruption. Last year, a Ukrainian court convicted him of treason over his invitation to Russia to invade Ukraine in 2014. Paul Manafort, who worked as Trump’s campaign chairman in 2016, was previously a longtime adviser to Yanukovych and was sentenced last year to seven years in prison for crimes that include illegally lobbying for Yanukovych in the United States and tax fraud related to his efforts to hide proceeds from his Ukrainian work. The House of Representatives impeached Trump last year for attempting to pressure Ukraine to investigate former Vice President Joe Biden. That scheme involved Trump’s personal lawyer, Rudy Giuliani, working with former political allies of Yanukovych.

…only it's a pic from Kyiv in 2014, when Yanukovich's thugs fought to quash a democratic uprising.https://t.co/VfJujT50Lm pic.twitter.com/QBrlwauo6s

In its effort to smear American anti-police-violence protesters, the Trump campaign—which did not respond to questions about the ad—seems to have inadvertently sided with pro-Russian forces suppressing democratic dissent in Eastern Europe.

Mstyslav Chernov, a Ukrainian photographer, confirmed via email that he took the photograph in Kyiv. He indicated the Trump campaign had not sought his permission to use the image but added that the campaign didn’t need to do so, since he published it on Wikimedia under a Creative Commons license, allowing anyone to use it. Chernov, who now works for the Associated Press, said he couldn’t comment further.

But Chernov previously seemed to fault the Trump campaign in remarks to Business Insider: “Photography has always been used to manipulate public opinion. And with the rise of social media and the rise of populism, this is happening even more,” Chernov said. “The only way to combat this is through education and media literacy. When people learn to independently distinguish truth from lies, then the number of manipulations will decrease.”