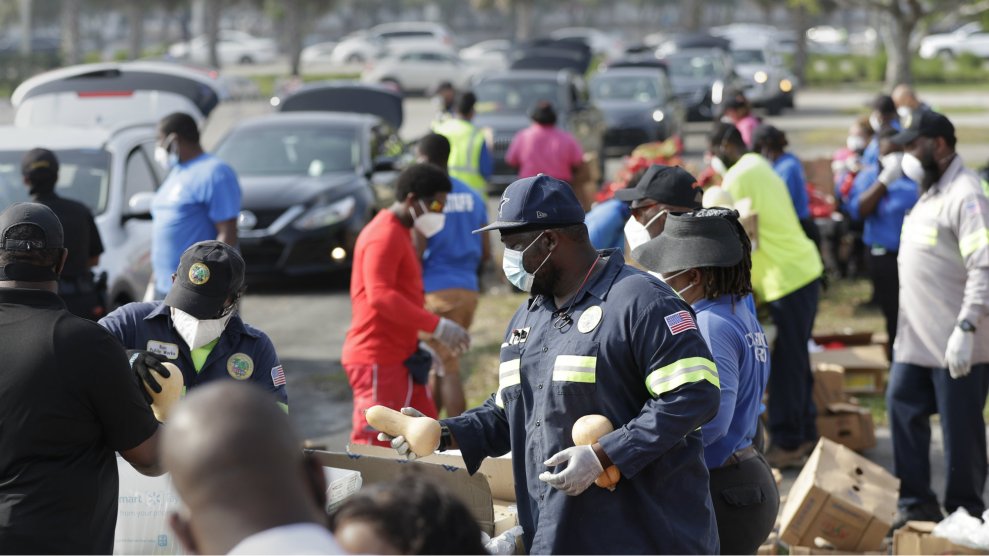 Workers distribute food at a distribution event in FloridaWilfredo Lee/AP

As the novel coronavirus spreads through the country infecting nearly 850,000 people, killing more than 47,000, and shuttering businesses, the number of unemployed people has skyrocketed at rates not seen since the Great Depression in the 1930s. The massive spike in unemployment, with 22 million unemployed, has led to a crushing wave of people in desperate need of food; photos of families and individuals sitting in miles-long lines of cars waiting at food distribution centers in California, Michigan, and Florida have gone viral in the last several weeks.

“We are in the midst of a historic economic crisis—people are hurting,” Harris said. “They are struggling to put food on the table, and existing nutrition benefits don’t get people through the end of the month.”

In 2019, 38 million people received food assistance from the federal government, which averaged $448 for a family of four. Though advocates have long called for the benefit to be expanded, it remains a crucial lifeline for individuals and families living in poverty. It also boosts the economy by allowing people to purchase groceries and creates jobs in the food and trucking sector.

The lawmakers’ Closing the Meal Gap Act would increase the benefit to individuals and families by 30 percent and allow territories like Puerto Rico, American Samoa, and Northern Mariana Islands to receive food assistance as an entitlement, instead of a block grant. Today, territories only receive grants, which are a fixed amount of money, while states receive entitlements that can be increased by the federal government based on need. Currently, able-bodied adults between the ages of 18 and 49 who have no dependents can only receive three months of assistance in a three-year time period unless they prove that they are working at least 20 hours a week. States with high unemployment rates can request waivers to exempt recipients from the three-month rule. The proposed legislation also strips away all work requirements for food assistance.

The Families First Coronavirus Act, passed by Congress and signed into law last month allows the US Department of Agriculture, which administers the program, to increase benefits during the public health emergency and temporarily suspends work requirements until one month after the crisis is over. Harris’ proposed bill seeks to make these changes permanent.

“The SNAP program provides a critical lifeline for food insecure families, but during this unprecedented crisis, the program needs more support than ever to meet the needs of every SNAP recipient,” said Gillibrand. “Not only must SNAP provide more benefits, but barriers to eligibility should also be limited in order to reach more families.”

The strict work requirements are often a burden on those needing food assistance, as I reported in December:

Despite conservative rhetoric, able-bodied adults without dependents who receive SNAP are some of the poorest Americans. According to the Center for Budget and Policy Priorities, their average income is 18 percent of the poverty line. Their average monthly SNAP benefits are approximately $165 a month. For many of them, because they are adults without children or other dependents, these are the only federal benefits they are eligible for.

Then there’s the problem of documenting seasonal and gig work. Many individuals who receive SNAP earn their incomes through a string of jobs in the gig economy, such as rideshare driving or one-day freelance projects. “It’s difficult to document that,” Hamler-Fugitt says. “Who’s supposed to certify that you’re working 20 hours?”

Last December, the Trump administration proposed a new rule that would make requesting waivers even more difficult. Advocates estimated that this would have kicked nearly 700,000 people off of the food stamp rolls beginning in April 2020. Last month, the Trump administration was still planning to implement the rule, despite COVID-19 having been declared a pandemic and businesses closing down:

At a budget request hearing at the House Committee of Appropriations on Tuesday, Rep. Barbara Lee (D-Calif.) asked USDA Administrator Sonny Perdue if he had considered delaying the rule considering the public health emergency. Perdue responded that his agency had considered delaying but ultimately decided not to. Lee noted that wages in the US remain stagnant with many people are still struggling to find work.

“If they can’t find work in an economy of 3.5 percent unemployment,” Perdue replied, “I’m not sure when they can.”

A few days after the hearing, however, a federal judge blocked the new rule, citing concern over the coronavirus. “As a global pandemic poses widespread health risks, guaranteeing that government officials at both the federal and state levels have flexibility to address the nutritional needs of residents and ensure their well-being through programs like SNAP, is essential,” Chief Judge Beryl Howell of the US District Court in Washington, DC, said. The Trump administration announced plans to appeal the decision.

In contrast, the proposed legislation aims to make SNAP more accessible. “We need to give people the resources they need to afford food during tough times,” Harris said. “No one in America should ever go hungry, especially during a public health crisis.”