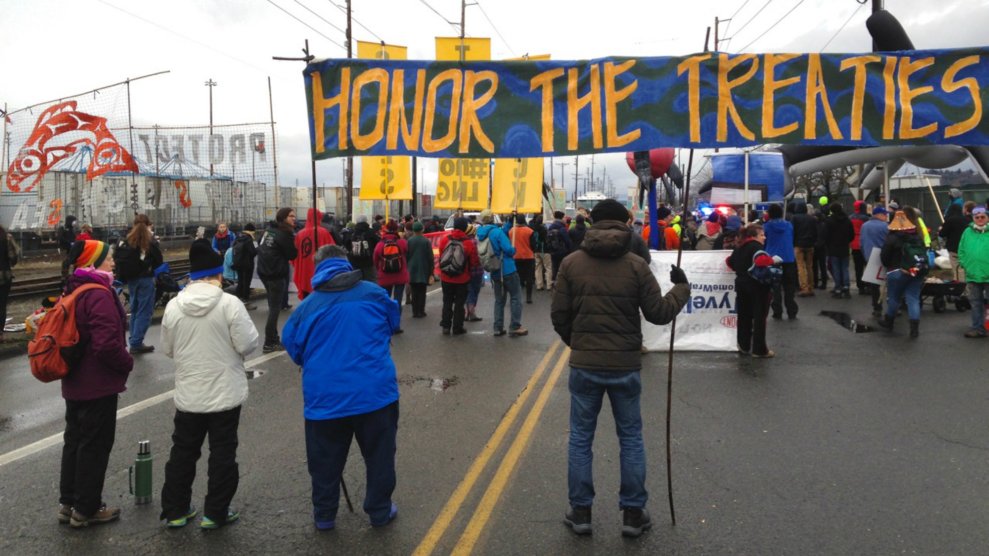 Hundreds of protesters blockade Puget Sound Energy's liquefied natural gas facility under construction at the Port of Tacoma, Washington, in December 2017. This protest followed a non-guilty ruling of two protesters who chained themselves to equipment at the site on May 17. They were acquitted since it could not be determined whether they were on tribal land.Backbone Campaign

One foggy morning last May, two grandmothers traveled to the Port of Tacoma at dawn, set up folding chairs, and chained themselves to an auger using PVC pipes. Cynthia Linet, 79, and 69-year-old Marilyn Kimmerling hoped to stop construction of a liquefied natural gas (LNG) facility on the traditional territory of the Puyallup Tribe in western Washington. Their protest, which halted construction for four and a half hours, ended in their arrest.

“We’re all polluted, and the planet is heating up, and we know what’s coming,” says Kimmerling. “We have to do everything we can to stop it.”

Kimmerling is a non-Native of Jewish ancestry whose belief in Native rights inspired her to take action at the Port. At the trial, she attempted to read aloud the historic Medicine Creek Treaty of 1854, which guarantees tribal fishing rights to the tribe—a request the judge denied. Kimmerling says she’s supported the American Indian Movement ever since Native activists occupied Alcatraz Island in 1969, and has “been marching for Leonard Peltier’s clemency for about 20 years.” Initially, she became involved with the LNG protest for environmental and safety reasons, but the issues soon converged for her.

“We’re all polluted, and the planet is heating up, and we know what’s coming. We have to do everything we can to stop it.”

Her experience is not unique. Over the past four years, tribal governments and their non-Native allies have managed to halt several fossil fuel projects planned for the region, including the Gateway Pacific coal terminal in May 2016, the Coyote Island coal terminal in 2014, three oil terminals in Quinault territory beginning in 2016, and the country’s largest oil-by-rail terminal, just defeated in January at the Port of Vancouver.

Treaties and tribal sovereignty have loomed large in each of these conflicts. While many activists in recent years have called attention to fossil fuels and climate change, tribal governments are continuing a decades-long struggle—invoking their sovereign right to protect and restore the land. Though that right is not fully embraced by non-Native governments, it’s being increasingly recognized, and even celebrated, by the non-Native public.

Two ongoing conflicts in the Pacific Northwest demonstrate the very different ways non-Native governments are responding to these issues.

By the time Linet and Kimmerling made their stand, Puget Sound Energy had been working on the facility for months despite protests, tribal lawsuits, and the absence of a key permit from the Puget Sound Clean Air Agency. The agency issued a notice of violation last spring but has also refused to halt construction or consult with the Puyallup Tribe.

The tribal council says that local governments have failed to consult with it from the beginning. Despite receiving over $70 million in annual revenue from the Puyallup’s traditional lands, the Port of Tacoma has largely declined to even comment on the tribe’s claims. Spokeswoman Tara Mattina said only that the Port has consulted previously on projects within the Medicine Creek Treaty survey boundary, and that, according to the Port, the LNG project is outside that boundary.

A jury in Tacoma Municipal Court was less certain about that, however, and in December, it unanimously concluded that the two women could not be prosecuted for trespassing. Ramona Bennett, a tribal elder and expert witness, had argued persuasively that both the project and the protest were on tribal land. Ultimately, the jury could not decide whether the defendants were trespassing on port land, or whether Puget Sound Energy and the Tacoma police were trespassing on tribal land.

The acquittal stunned the prosecutor. But it was no surprise to Bennett, who, back in 1970, led a fishing camp on the Puyallup River, warning police that it was tribal property and any interference would be considered trespassing. The camp was attacked and bulldozed by 600 Tacoma and state police, a debacle that historian Vine Deloria dubbed “the great Tacoma bust.” All charges were later dropped when a US solicitor confirmed exactly what Bennett had warned the police before she was beaten and arrested—that they were illegally trespassing on tribal land. The police violence that day led to one the biggest victories for treaty tribes in modern history—the Boldt decision of 1974. This decision won unprecedented protections for fishing communities and fish habitat, and inspired Native/non-Native co-management of natural resources across the state. But at the Port of Tacoma, local governments have refused to consult or even discuss those protections, and so both construction and protests have continued unabated.

Two hundred miles south of here on the Columbia River, another conflict pitting Indian rights against corporate development is moving in a far different direction. This controversy made national news in 2016, when an oil train bound for the Port of Tacoma crashed and burned in Wasco County, Oregon, spilling an estimated 47,000 gallons of oil and prompting a partial evacuation of the town of Mosier.

At the time of the crash, the Union Pacific Railroad was already pushing for a four-mile track expansion to accommodate more coal and oil trains along the Columbia River.

In this case, however, Wasco County blocked the project after consulting with the Yakama Nation, the Confederated Tribes of Warm Springs, and the Confederated Tribes of the Umatilla. Union Pacific unsuccessfully appealed the decision to the Columbia Gorge Commission, which upheld the treaty rights of tribes in June last year, just a few weeks after the Port lock-down in Tacoma). Commissioners say each decision springs from the act of Congress that formed their agency as an interstate compact, binding county governments in the national scenic area to enforce the will of Congress—including protections for treaty tribes who have lived on the river since time immemorial. Union Pacific is currently appealing the latest decision and attempting to remove the tribes from the case.

The Columbia Gorge Commission is considered a model by tribal leaders like Chuck Sams, the interim executive director of the Confederated Tribes of the Umatilla. Since 1991, it has treated tribes as experts in their own culture and banned any projects that would harm tribal resources. This contrasts with the attitude of agencies like the US Army Corps of Engineers. According to Sams, at the same time that Wasco County “diligently undertook the analysis of the impacts to our treaty rights,” the Army Corps, reviewing the same project, refused to consider the subject.

In fact, by the time the Corps asked tribes for input, it was already announcing its preliminary decision that the project would not impact treaty resources, citing a cultural resource survey conducted by Union Pacific. The Corps, which later dismissed tribal concerns as “speculative,” shrugged off worries about higher rail speeds and potential accidents as “indirect effects” of the project.

Back in Tacoma, the Puget Sound Clean Air Agency has refused outright to consider any treaty rights, with officials claiming they have no legal duty to consult the tribes.

On Feb. 26, however, the Seattle City Council took the opposite view, passing a resolution formally calling on the Puget Sound Clean Air Agency to engage in government-to-government consultation with the tribe.

The week before, Seattle City Council member Debora Juarez formally invited the Puyallup Tribe to consult with the city about the LNG plant. She emphasized that meaningful consultation is “required by state, federal and international laws and norms—most notably the Treaty of Medicine Creek of 1854,” the very treaty Marilyn Kimmerling was forbidden to read at her trial.