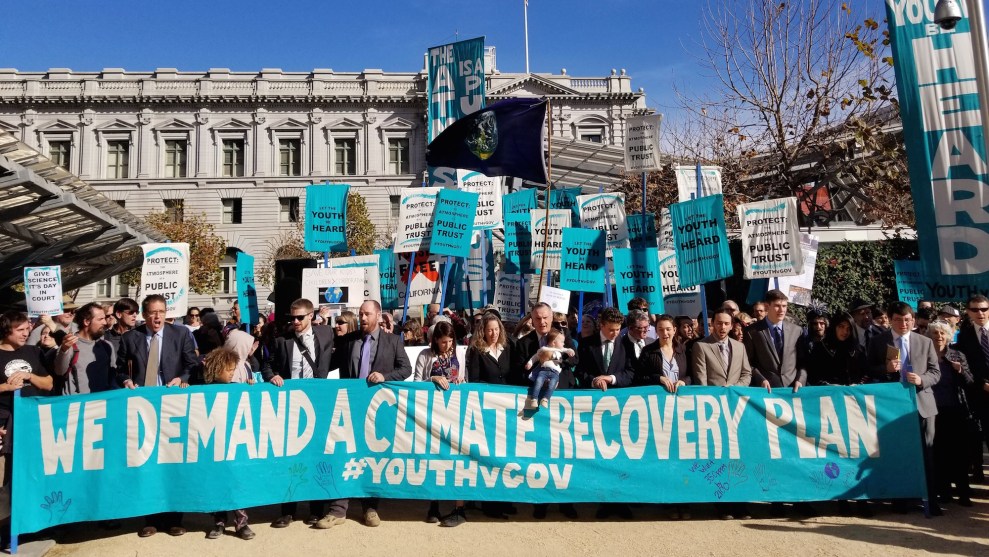 Eighteen of the 21 kids and young adults suing Trump, their lawyers, and supporters pose for a photo outside the US Court of Appeals for the Ninth Circuit in San Francisco.Amy Thomson

“We the people are ready to leave,” sang a small choir of climate activists in downtown San Francisco, “’cause the White House makin’ it hard to breathe.”

That was the rallying cry in support of the 21 plaintiffs, ages 22 and younger, who are suing the federal government for causing climate change damages and thereby violating their constitutional rights. Last year, on December 11, a crowd of around 100 people gathered across the street from the 9th Circuit Court of Appeals in San Francisco where oral arguments were being heard as the government defendants tried to argue the case should not go to trial.

But the court ruled in favor of the young plaintiffs last month, and on Thursday, a US magistrate judge set a trial date for October 29 in Eugene, Ore.

“We’ve got our track shoes on and we’re ready to get this case all set for trial,” Phil Gregory, lead co-counsel for the plaintiffs, told Mother Jones.

The plaintiffs in Juliana v. the United States are arguing that the US government has known for decades that carbon dioxide emissions are endangering the planet. By allowing the production of fossil fuels to continue, the lawsuit alleges, the plaintiffs’ constitutional right to life, liberty, and property is being violated, in addition to their public trust rights. They are supported by Our Children’s Trust, a nonprofit group that works to amplify young voices demanding a stable climate and by Earth Guardians, an organization with a similar mission that is also a plaintiff on the case.

That the plaintiffs are young is a big part of their legal argument. As the government continues to neglect the consequences of climate change, they say, their future selves—and their future children—will suffer.

“This has to be one of those moments of people coming together uniting and fighting for justice,” said 17-year-old Xiuhtezcatl Martinez, one of the plaintiffs and Earth Guardian’s youth director, outside the courthouse in December. “This is about more than politics and the environment; it’s about our futures.”

The goal of the suit is to establish a climate recovery plan, Gregory says, based on the best available science, including replacing fossil fuel energy with renewables. “We have an energy addiction,” he says. “Our Congress and President—and not just this President—have done nothing to take the necessary steps to halt the state-created danger.”

The case’s origins date back to the Obama administration, when Julia Olson, an attorney from Eugene, Ore., gathered a group of young climate advocates and additional attorneys to file the suit against the government in 2015. Trump’s team inherited this case and made an attempt to stop it last year. Over the summer, the US legal team asked the Court of Appeals for the 9th Circuit to review a 2016 decision that allowed the case to move forward, known as “a petition for writ of mandamus.”  The Trump administration argued that preparation for trial—which could uncover scores of documents and communications related to fossil fuel companies—would be an unreasonable burden for the government. In response, the courts agreed to hear the oral arguments. In March, they denied the petition, which paved the way for a trial date.

Gregory says he thinks that the Trump administration will make another attempt to stop the case. He tells Mother Jones that Trump’s team has until June to propose that the case go straight to the Supreme Court, where the team could file a similar petition, asking that the recent decision allowing the case to proceed to trial be reviewed. “The federal government is scared to put climate science before a federal court,” he says. “I don’t think [President] Trump and [Environmental Protection Agency Administrator Scott] Pruitt have the guts to let a judge decide this issue.”

At the December rally in San Francisco, the youngest plaintiff, Levi Draheim, took the mic. The 10-year-old lives on a barrier island in Florida. He told the crowd that after Hurricane Irma, when catastrophic winds tore through Carribean Islands and southwest Florida in September, his street was underwater. “I have been affected by climate change,” he said. “If we don’t stop climate change then I might not have a home when I’m older.”