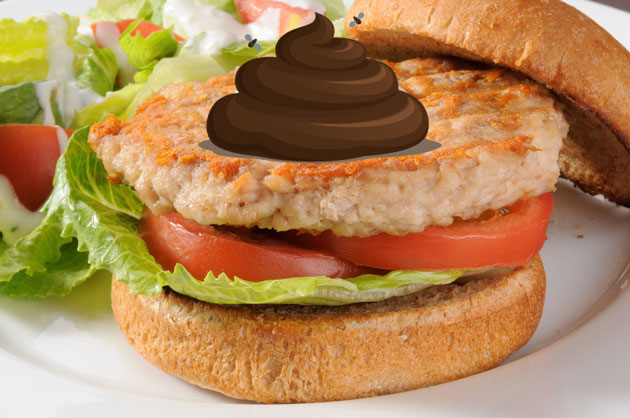 Back in August 2011, the agribusiness giant Cargill recalled a stunning 36 million pounds of ground turkey tainted with antibiotic-resistant salmonella that had come from a single processing facility in Arkansas, a failure that eventually sickened 136 people and killed another. The company shut down the plant, tweaked its process (mainly by adding to and “intensifying” its system of spraying meat with antimicrobial fluid), and quickly reopened it. Within a month, the company had to recall another 108,000 pounds of ground turkey from the same plant, because it was infected with the same strain of superbug salmonella.

Have things gotten any cleaner in the world of Big Turkey since those events? Cargill says it has cleaned up its act, but recent research suggests that ground turkey still has an antibiotic-resistant-pathogen problem. The latest evidence comes from Consumer Reports, which has just published the results of testing it did on 257 samples of ground turkey picked up from retailers around the country, produced by a variety of processors, including Cargill. CR contacted Cargill with the results, and got the following response:

“As we’ve publicly stated over the past year and a half, no stone was left unturned in our efforts to determine the originating source of salmonella Heidelberg associated with the ground-turkey recalls, yet to this day we do not know the origin of the bacteria linked to outbreak of illnesses,” said Mike Robach, vice president of corporate food safety and regulatory affairs for Cargill in Minneapolis. He provided a long list of steps that Cargill has taken since the outbreak to make its ground turkey safer.

Even so, the results of Consumer Reports’ tests won’t make you eager to order that next turkey burger: “More than half of the packages of raw ground meat and patties tested positive for fecal bacteria.”

Overall, 90 percent of the samples tested by CR researchers carried at least one of the five bacteria they looked for—and “almost all” of the bacteria strains they found showed resistance to at least one antibiotic. The two fecal-related bacteria strains—enterococcus and E. coli—showed up the most frequently:

What’s more, those bacteria tended to be superbugs—that is, resistant to at least one antibiotic:

You’ll note from the above charts both good and bad news about salmonella, the source of that 2011 Cargill outbreak. Happily, salmonella was rare in the meat CR tested—just 12 samples contained it, or 5 percent of the total. Unhappily, though, the salmonella they did find tended to be of the superbug variety—eight of those samples carried salmonella resistant to three or more classes of antibiotics. And there’s evidence of lingering problems at that Arkansas plant of Cargill’s—one of the multiresistant salmonella strains came from there, CR reports.

Consumer Reports also tested samples of ground turkey labeled “organic,” “no antibiotics” and “raised without antibiotics.” (Under USDA code, meat labeled organic must come from animals that were never treated with antibiotics.) The bacterial strains that turned up in these products were much less likely to be antibiotic-resistant. 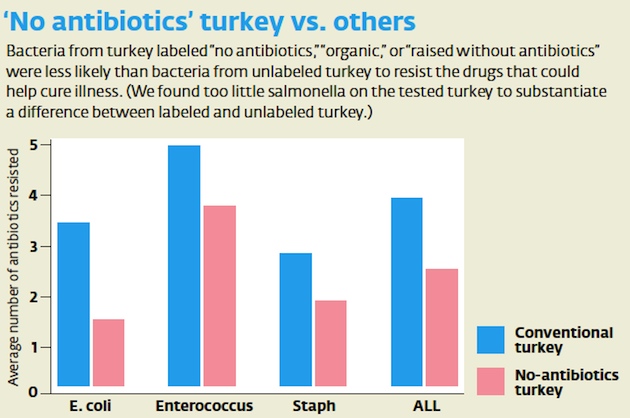 The Consumer Reports study comes on the heels of a troubling analysis of Food and Drug Administration meat-testing data performed by Environmental Working Group. Every year, the FDA randomly selects samples of meat from retailers, tests them for resistant bacteria, and publishes the results in a manner that’s nearly indecipherable (try it yourself—latest report, released in February, is here). EWG slogged through the results (report here) and found that 81 percent of ground turkey samples contained traces of antibiotic-resistant bacteria.

All of which shines a harsh spotlight on the FDA’s “voluntary” approach to curbing antibiotic use on farms. Between 2003 and 2011, antibiotic use on US livestock farms soared from 20 million pounds per year to 30 million pounds—a jaw-dropping 50 percent leap. These facilities now suck in 80 percent of the antibiotics consumed in the United States. The great bulk of these drugs are used not to treat sick animals, but rather to make them grow faster and keep them alive until slaughter under tight, filthy conditions.

Meanwhile, there’s the US Department of Agriculture’s imminent plan to slash the number of inspectors it places on poultry-industry kill lines (chicken and turkey) while simultaneously allowing those same kill lines to be sped up.