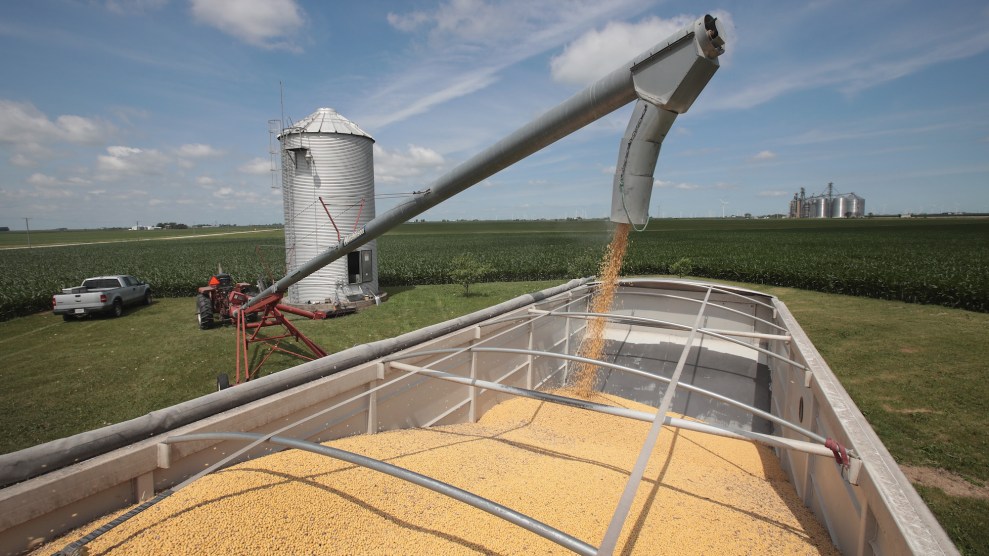 Donald Trump may have thing for soybean farmers—understandably, because the map of US soybean production tacks closely with that of the president’s support in the 2016 election.

On Tuesday, he plucked $12 billion out of the federal Treasury to aid farmers ailing from severe price drops brought on by his trade machinations—among whom soybean growers figure perhaps most prominently. And in a surprise move Wednesday afternoon, Trump made peace with one of the main targets of his trade ire, the European Union, and put soybeans at the center of the deal: “European Union representatives told me that they would start buying soybeans from our great farmers immediately,” he claimed in a Tweet.

European Union representatives told me that they would start buying soybeans from our great farmers immediately. Also, they will be buying vast amounts of LNG!

(The “LNG” in that tweet refers to liquified natural gas. The question of whether the US should be sending “vast amounts” of natural gas overseas is a freighted one; but because the United States currently lacks the port capacity to export a significant amount to Europe, such a scenario won’t happen anytime soon.)

As for soybeans, the EU deal shouldn’t cause people in the US heartland to rejoice. First of all, the EU wasn’t restricting US soybean imports before Trump’s supposed deal. Traders there have already been buying more US product in recent months, Reuters reports.

And even if it did decide to purchase loads more US beans, the entire European Union represents a relatively tiny market for soy compared to China—by far the world’s biggest consumer of the commodity, and a nation whose trade hostilities with Trump remain quite active. In 2017, the entire EU imported 14.5 million metric tons of soybeans, compared to 95 million metric tons for China.

This chart illustrates Europe’s relative importance to US soybean growers:

Relatively small EU market aside, US farmers have for years supplied the Union with about a third of its imported soybeans. The US share of the EU market share is topped only by that of Brazil, which has emerged in recent decades as a soybean powerhouse. Several months ago, China abruptly stopped buying US soybeans, in retaliation against Trump’s tariffs, ramping up its purchases from Brazil to make up the difference.

That shift caused US soybean prices to plunge and Brazilian prices to rise—and that’s why, as noted above, the European Union has been snapping up more and more US soybeans in recent weeks, long before Trump’s latest deal. It’s just that the volumes aren’t nearly enough to make up for the lost China market.

As a result of the EU deal and Trump’s $12 billion bailout, US soybean prices have risen a bit, but not by much:

To make a profit, US farmers needs soybeans to fetch at least $10.05 per bushel, a recent University of Illinois analysis found. Even after the recent mini-rally, the price was just $8.59.