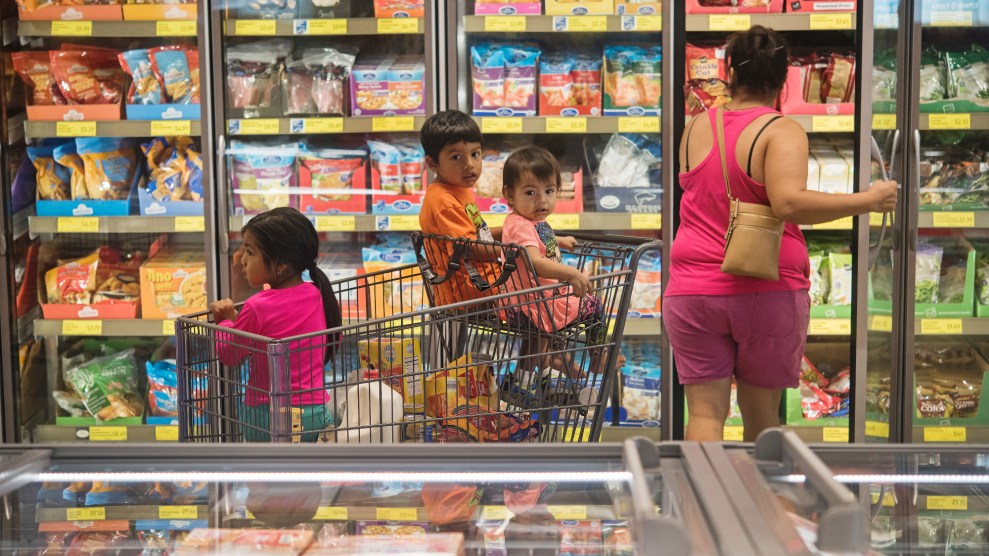 A critical tool for fighting child hunger is set to expire at the end of the month, despite persistent need among millions of children due to the pandemic. The Pandemic-EBT program was created in March to give families funds to buy groceries in lieu of free or reduced-price breakfasts and lunches their children would otherwise have been getting at school. Unless Congress renews the program before Sept. 30, eligible families will lose access to the benefit until at least after the presidential election.

Unless Congress renews the program before Sept. 30, eligible families will lose access to the benefit.

Families enrolled in the program received benefits ranging from $250 to $450 per school-age child. Although households with children have been able to access an array of emergency benefits during the pandemic, P-EBT was particularly effective at both reducing hunger and stimulating the economy. According to research from the Brookings Institution, the program led to a 30 percent drop in food insecurity among low-income children in the week following the disbursement of benefits, reaching an estimated 2.7 million to 3.9 million kids.

“What we have learned from P-EBT compared to other programs, like summer meals, is that programs that center on providing funds to families seem to be more effective than having families jump through hurdles to get to food pickup sites,” said Lauren Bauer, a fellow at Brookings and one of the authors of the study. Many families struggling with hunger are “holding on to low-paying jobs and cannot afford to go pick up meals and wait in a two-hour line to get things.”

Zoë Nuerberger, a senior policy analyst at the Center on Budget and Policy Priorities, said, “What stands out most about P-EBT is that in such a short period of time, every single state got a completely new program up and running. It’s a program that requires different agencies in a state to work together and to compile a list of all eligible school children.”

Despite the program’s efficacy, the rollout process varied significantly among states. It wasn’t until late August that all 50 states were approved for the program, and implementation was far smoother in some states than in others.

Michigan, for example, started sending benefit cards in April, and managed to reach more than 900,000 families in just over a month, thanks to robust data-sharing infrastructure that predates the pandemic. But in Louisiana, many families did not even begin receiving P-EBT cards until June, in part because of a privacy law that barred the state’s Department of Education from sharing student data with the Department of Children and Families, which was responsible for sending out benefit cards. Other issues—from internet access to administrative glitches—left eligible households excluded from the program.

“Families have had difficulty accessing information about enrollment, sometimes because they don’t speak English, or don’t have access to technology,” said Danny Mintz, an anti-hunger advocate at the Louisiana Budget Project, a nonprofit that monitors the impact of public policy on low- and moderate-income Louisiana families. “When the information that families enter into the P-EBT application doesn’t exactly match the student information the state has on file, because of typos or other issues, those problems are often very difficult for families to resolve.”

Because of enrollment difficulties, the USDA authorized certain states to continue accepting applications for August and September, either to get benefits to kids who have yet to return to school or to issue back benefits to those who had missed out on spring enrollment. But that effort has also encountered difficulties: “Many states have to determine whether students are eligible on a school-by-school basis, which is very difficult,” Mintz added.

In Washington State, fewer than half of eligible students had applied for P-EBT by the Sept. 11 deadline, due to inadequate outreach and a lack of awareness among eligible families. This week, more than 200,000 eligible Colorado families remained unenrolled in advance of the Sept. 23 application deadline. States must return whatever funds haven not yet been disbursed by the end of the month to the federal government.

With persistent gridlock in Washington, anti-hunger advocates fear Congress will adjourn without additional action on the program. And as the Sept. 30 cutoff deadline looms, food insecurity continues to soar, particularly among children.

“P-EBT is the most efficient way to get food into people’s hands. Taking that away is going to have really catastrophic effects.”

P-EBT has filled gaps left by other anti-hunger tools. For instance, it was available to the lowest-income families that were excluded from Congress’ emergency SNAP benefits. Sherrie Tussler, the executive director of the Hunger Task Force, an anti-hunger group based in Milwaukee, stressed the unique importance of P-EBT.

“It keeps people safe and indoors, reduces disease transmission, and reduces hardship for parents now homeschooling kids who can’t go get bagged lunches or families without transportation who live in remote areas,” she said in a press call organized by the Center on Budget and Policy Priorities. “P-EBT is the most efficient way to get food into people’s hands. Taking that away is going to have really catastrophic effects.”