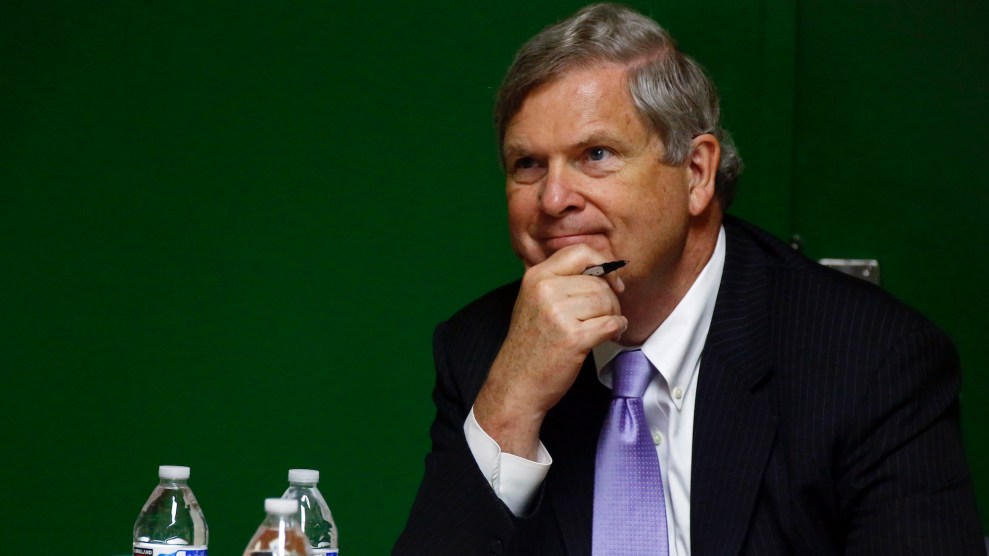 Once and future US Department of Agriculture Secretary Tom Vilsack in 2016, during his first stint on the job. Thais Llorca/EFE via ZUMA Press

On February 2, the Senate Agriculture Committee will meet to consider the nomination of erstwhile dairy-industry marketing executive Tom Vilsack as secretary of the US Department of Agriculture. Sen. Debbie Stabenow (D-Mich.), the committee’s top Democrat and likely next chair, signaled that Vilsack, who led the USDA during the entire Obama administration, will have an easy path to confirmation.

“People know him and trust him,” Stabenow told reporters last week, according to Roll Call. “He certainly has broad, deep and wide knowledge of all aspects of agriculture and probably one of our top advocates for rural communities in the country.”

But while Vilsack undeniably enjoys strong support in agribusiness circles, his nomination earned widespread condemnation in sustainable agriculture and racial justice circles. Here are three questions senators should ask to tease out their concerns:

• Will you support the Justice for Black Farmers Act? In a 2016 article published near the end of his first run at the USDA, Vilsack claimed that he had finally ended rampant racism within the agency, which had triggered a massive transfer of land from Black to white farmers, starting in the 1950s. “We’ve taken big, bold steps to rectify past wrongs and ensure all Americans who come to USDA for help are treated fairly, with dignity and respect,” Vilsack wrote. But in a 2019 investigation for the Counter, writers Bryce Stucki and Nathan Rosenberg poked some holes in that claim: “Despite changes in rhetoric,” they found, “Black farmers faced the same challenges under Obama that they did under [George W.] Bush.” In the Vilsack era, “USDA employees foreclosed on Black farmers with outstanding discrimination complaints, many of which were never resolved,” and “sent a lower share of loan dollars to Black farmers than it had under President Bush.” Black farmers and advocates widely lamented news of Vilsack’s imminent return to USDA.

One way to put Vilsack on the spot would be to ask him about the Justice for Black Farmers Act, introduced last year by Senators Cory Booker (D-N.J.), Elizabeth Warren (D-Mass.) and Kirsten Gillibrand (D-N.Y.). The bill would go beyond chirpy rhetoric by allocating $8 billion annually to buying farmland on the open market and granting it to new and existing Black farmers, with the goal of making 20,000 grants per year over nine years, with maximum allotments of 160 acres. In addition, it would take action to cleanse the USDA of persistent racism by setting up an independent civil rights oversight board to review discrimination complaints, and provide central oversight of the agency’s far-flung Farm Service Agency County Committees, which wield tremendous power over who gets loans and access to USDA programs at the local level—and have long been hotbeds of racial discrimination, as historian Pete Daniel showed in his 2013 book Dispossession: Discrimination against African American Farmers in the Age of Civil Rights. Getting Vilsack on record about the Justice for Black Farmers Act would go a long way toward gauging his appetite for doing the real work of challenging the USDA’s racial dynamics this time.

• How will your five-year run as a highly paid dairy marketing executive color your next stint at the USDA? Days after leaving his job in Obama administration in 2017, Vilsack swished through the revolving door between government agencies and the industries they regulate, taking the job of CEO of the US Dairy Export Council. The Council is funded mainly by the dairy checkoff, a federal program overseen by the USDA in which dairy farmers pay 15 cents for every 100 pounds of milk they sell into a fund used to promote the industry. Vilsack drew annual compensation of nearly $1 million for the job. For decades, US dairy farmers have been locked in a death spiral of overproduction, encouraged by federal farm policy. As a result, the number of dairy farms has dropped steady—plunging by a record 9 percent in 2019 alone—even as overall milk production rises. In an environment of low prices and cutthroat competition, only the biggest, most industrialized operations can thrive.

Now that Vilsack is heading back through the revolving door, senators should grill him about what his stint at Big Dairy taught him about the brutal industry’s economics—and what policies could be enacted to create opportunities for small- and mid-size dairy that keep their cows on pasture, rather than confining them in vast, manure-concentrating feedlots.

• Will the USDA review its past approvals of pesticide-dependent crops? By the time Vilsack took the top USDA job in 2009, crops engineered to withstand the herbicide glyphosate already dominated the US corn, soybean, and cotton crops; and weeds had already evolved to resist glyphosate, causing farmers to use ever-higher doses of the toxic chemical and revert to older, even more toxic ones. Rather than help farmers exit what was essentially a chemical treadmill, the Vilsack USDA chose to accelerate it. As resistant weeds blitzed US farmland, the USDA kept approving new glyphosate-tolerant crops, including alfalfa (fodder for cattle) and turf grass, expanding the problem’s range. In 2015, USDA greenlighted the industry’s favored solution to the crisis: adding more toxic chemicals to the mix. The department approved cotton and soybeans engineered to withstand dicamba and 2,4-D—even though both had a well-documented tendency to drift far from intended areas. As I explained in a December piece: “The result has been a full-on disaster.”

As Monsanto’s seeds have conquered soybean and cotton fields from Nebraska to Georgia, wayward dicamba has strayed from targeted fields and damaged millions of acres of crops, trees, and home gardens. The Trump administration’s response has been to defend the industry, even defying a court-ordered ban on the products. Meanwhile, a team of National Cancer Institute scientists found that exposure to dicamba heightens the risk of liver cancer. University of Missouri researchers have found it in rainwater at high levels near sprayed fields, and in the air for 72 hours after application.

Senators should demand to know whether Vilsack regrets the USDA’s role in enabling the dicamba-drift crisis—and what he intends to do about it now.