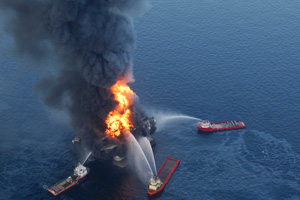 The National Oil Spill Commission on Tuesday released a voluminous report on the causes of the Deepwater Horizon disaster and its implications for the future of offshore drilling in the United States. The report, a doorstop of more than 300 pages, contains a long list of advice for the oil industry and federal regulators about how to avert a future catastrophe. But many of the commission’s recommendations require action from Congress—and given the current political climate, those changes might be hard to make for at least the next two years.

“The industry fought measures in Congress and previous administrations to tighten safety standards and prevent regulations,” said Richard Charter, senior policy adviser for the marine program at Defenders of Wildlife. “If industry continues its past practice of foot-dragging and a recalcitrant attitude about actually implementing safer drilling practices, then what we will be left with is a big pile of paper and no action.”

The commission released an advance copy of one chapter of the report last week that outlined the risks that rig operator BP, owner Transocean, and cement-provider Halliburton took that likely caused or contributed to the explosion. In the rest of the report, while allocating the blame for the Deepwater spill largely to the three companies involved, the commission made it clear that it believes systemic failures across the industry underlie the tragedy. The authors note that Transocean and Halliburton are two of the largest offshore drilling contractors, working with a number of other major industry players beyond BP.

“The Deepwater Horizon disaster did not have to happen,” said commission co-chairman and former Florida Sen. Bob Graham (D) on Tuesday. “It was both preventable and foreseeable…That it did happen is the result of a shared failure that was years in the making.”

The commission laid out a number of changes that Congress would need to make to prevent a repeat disaster: raising the cap on liability (which ensures that companies that spill only have to cover up to $75 million in damages in the event of a disaster), extending the window of time granted to regulators to evaluate permit applications for new drilling from 30 to 60 days, and creating a new office in the Department of Interior charged specifically with overseeing safety in offshore drilling. The commission also recommended better compensation for regulators (an incentive to keep them working in government rather than industry) and a dramatic increase in funding for the Department of Interior agency that oversees drilling.

The commission did not offer a new figure for the liability cap, which was set under the Oil Pollution Act in 1990 and has not been increased since then. There were several proposals before Congress last year following the spill, including one that would eliminate the cap entirely and force companies to be on the hook for all the costs incurred in a spill, though the change, along with a larger spill-response bill passed by the House, was never approved in the Senate.

With Republicans now in control of the House, few expect that any package of spill response measures will be considered this year—let alone one as aggressive as the measures the lower chamber approved last year. Nevertheless, Graham was optimistic about the likelihood of proposals actually going somewhere in a Republican-controlled House. “I believe that this issue and the searing impact that the Deepwater Horizon has had on the conscience of America is such that it will override an ideological preference for less government, less government intrusion,” he said.

His co-chairman (and former Environmental Protection Agency administrator under George H.W. Bush), William Reilly, also said he thought Congress would heed the advice. “It’s very hard to predict Congress,” he said, “but in the conversations I’ve had, we have had a respectful hearing.” The co-chairmen will appear before several House and Senate committees later this month to discuss the proposals. “We’re going to make a lot of noise,” Reilly said.

But the early signs from the new Congress aren’t too promising. Doc Hastings (R-Wash.), the new chairman of the House Natural Resources Committee, has outlined plans to increase domestic drilling. His statement in response to the commission report, while acknowledging that some of the proposals “deserve real consideration,” struck a similar chord against any measures that could rein in drillers. “Congress needs to ensure that offshore energy production meets the highest safety standards, but as gasoline prices continue to rise we cannot allow ourselves to become increasingly dependent on hostile foreign nations for our energy needs,” he said.

The industry certainly provided no cheering section for the report. The American Petroleum Institute, which last week laid out its 2011 mission to make it easier for oil companies to drill in the US, released a statement Tuesday claiming that the industry has already undertaken “numerous steps to further improve safety.” The oil industry’s largest trade group argues that more regulations aren’t necessary: “API is deeply concerned that the commission’s report casts doubt on an entire industry based on its study of a single incident.” American Solutions for Winning the Future, Newt Gingrich’s pro-drilling 527 committee, dismissed the report as “anti-energy blather”.

The defensive stance from oil interests, says oil industry veteran Bob Cavnar, can be blamed at least in part on the fact that the commission itself lacked anyone from the industry; instead it is made up largely of academics and environmentalists. “The major changes to offshore drilling require congressional action,” said Cavnar, whose book Disaster on the Horizon assessed the causes of the blowout on the rig. “With a Republican Congress, the chances of those changes being made are zero unless the industry pushes it, and because the industry rejects the report, that’s not going to happen.”

While many in the environmental community welcomed the commission’s advice, they noted that even those proposals are still not enough to bring the risks of an accident down to zero. Many groups still want see offshore drilling stopped altogether.

“I think the recommendations are pretty tepid given the severity of the crisis,” said Jackie Savitz, director of pollution campaigns at the advocacy group Oceana. But, she admitted, “Even the small things they’re suggesting, I think it’s going to be hard to convince Congress to make those changes.”