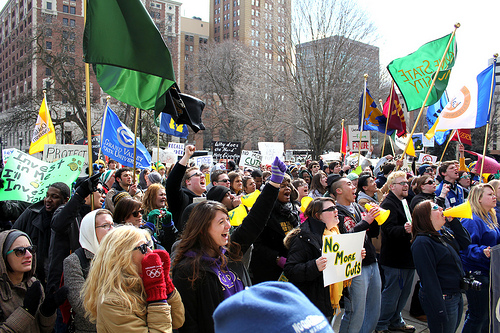 On March 24, William Cronon, an acclaimed history professor at the University of Wisconsin-Madison, offered a startling revelation on his personal blog: The Wisconsin Republican Party had filed a Freedom of Information Act request demanding all emails sent or received via Cronon’s UW email account mentioning certain labor unions, labor leaders, the words “recall” and “collective bargaining,” and the names of a host of state Republican lawmakers, including Governor Scott Walker. The request was clearly aimed at intimidating and discrediting Cronon, a prominent academic who has criticized Wisconsin Republicans, especially Walker, on his blog and in the pages of the New York Times.

According to professors subject to the request, filed under Michigan’s version of the Freedom Of Information Act, the request is extremely rare in academic circles. An employee at the think tank requesting the emails tells TPM they’re part of an investigation into what labor studies professors at state schools in Michigan are saying about the situation in Madison, Wisc., the epicenter of the clashes between unions and Republican-run state governments across the Midwest.

One professor subject to the FOIA described it as anti-union advocates “going after folks they don’t agree with.”

As I reported last week, the Mackinac Center is affiliated with the conservative Heritage Foundation in Washington, DC. The Center’s funders include one of the Koch brothers; the foundation of Dick DeVos, the heir to the Amway fortune; and the Prince Foundation, whose vice president is Blackwater founder Erik Prince. It was the Mackinac Center that inspired Michigan Republican Governor Rick Snyder’s “emergency financial manager” bill, which gives unelected managers unilateral power to void union contracts and dissolve local governments in the process of fixing fiscally unstable municipalities and public school districts.

A cause underlying much of the center’s work is privatization. Its scholars have called for privatizing Amtrak, prisons, and even the state’s flagship university, the University of Michigan. The center publishes the Michigan Privatization Report, and offers how-tos on privatizing school districts and suggests local contractors available for hire to replace existing public services.

The Mackinac Center is also connected to the American Legislative Exchange Council, the private organization that allows corporations and lobbyists to craft legislation for use at the state level. For instance, as NPR reported last fall, Arizona’s draconian immigration bill was based on a “model bill” written by private industry, including the Corrections Corporation of America, the nation’s leading private prisons company that operates corrections facilities around the country.

Now, the Mackinac Center joins the effort to discredit those who oppose their anti-union position, even though the think tank wouldn’t say what it planned to do with the emails. “I’m not going to release what we’re writing about,” the managing editor of Mackinac’s newsletter told TPM.