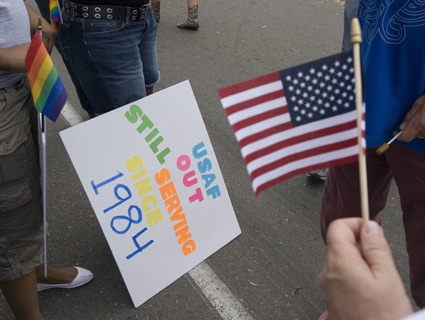 Don’t Ask, Don’t Tell is history, but House Republicans are still waging a last-ditch guerrilla campaign against the acceptance of gay and lesbian servicemembers.

Two years ago, Democrats, along with a handful of Republicans, used a defense bill as a vehicle for overturning the policy that prevented gays and lesbians from serving openly in the military. Republican opponents of DADT repeal accused Democrats of using the military to pursue a “social agenda.” But ever since, Republicans have used defense bills to further their social agenda—one contingent on limiting the rights and recognition of gay and lesbian servicemembers who are now allowed to serve openly.

Last year, Republicans tried to prevent military chaplains from conducting same-sex marriages for servicemembers—even if they wanted to. The GOP ultimately caved in that fight, but two amendments to this year’s defense bill represent even more aggressive attacks on gay rights.

The first, by Rep. Todd Akin (R-Mo.), purports to protect the freedom of “conscience” of servicemembers and chaplains by saying they can’t be disciplined for their views on “appropriate and inappropriate expression of human sexuality.” Akin’s website boasts that he has “led the fight back against gay marriage on military bases.”

Ian Thompson, a legislative representative with the American Civil Liberties Union, says Akin’s amendment “potentially opens the floodgates to giving a green light to discrimination against gay and lesbian servicemembers.” A senior defense official affirmed that the amendment could “wreak havoc on good order and discipline” and “invite harassment of sexual minorities by their peers.”

Akin’s amendment also states that chaplains can’t be forced to perform “any duty, rite, ritual, ceremony, service, or function do anything contrary to their religious beliefs,” which could cause broader problems because chaplains are frequently called upon to provide support to members of other faith groups.

“Chaplains by their very nature are required to be pluralistic; they’re committed to provide spiritual care for all of their servicemembers,” says retired Army Colonel Paul W. Dodd, a former chaplain who is now co-chairman of the Forum on Military Chaplaincy, a group supported the repeal of DADT. “They have a commitment to care for all of the troops, whether they happen to be in their particular denomination or not.”

Akin’s amendment is presumably intended to prevent chaplains from being forced to perform same-sex marriage ceremonies. But a previous defense bill wrote into law the Defense Department’s stated policy that no chaplain can be compelled to officiate a same-sex marriage.

Likewise, current Defense Department policy prohibits the use of military facilities for same-sex marriages in jurisdictions where such unions are illegal. An amendment from Rep. Steven Palazzo (R-Miss.), however, bans base facilities from being used for same-sex marriage ceremonies at all, even in jurisdictions that have extended marriage rights to gays and lesbians. Because of the federal Defense of Marriage Act, servicemembers in same-sex relationships are already denied a slew of benefits afforded to heterosexual couples (even unmarried ones).

Presiding over the committee shepherding the bill is Rep. Howard “Buck” McKeon (R-Calif.). McKeon criticized Democrats for “weighing down” defense bills with their “social agenda” when they were in the majority. But after assuming the chairmanship of the House Armed Services Committee, he has helped facilitate Republican efforts to undermine the repeal of Don’t Ask, Don’t Tell, supporting amendments to defense bills that LGBT rights advocates say sanction discrimination against gay, lesbian, and bisexual servicemembers.

McKeon has a long history of hostility to gay rights. During his first campaign for Congress in 1992, he returned $350 dollars in donations from the pro-gay rights Log Cabin Republicans, saying, “I think that, politically in this district, taking money from gays is just not a smart thing to do.” Shortly after being elected, he fought President Bill Clinton’s Don’t Ask, Don’t Tell compromise that allowed gay and lesbian servicemembers to serve if they stayed in the closet. When Obama sought to repeal that policy, McKeon fought to keep it in place. McKeon’s advocacy hasn’t been limited to military matters—his campaign donated $5,000 to the supporters of Proposition 8, the ballot initiative that banned same-sex marriage in California.

“He ranks among the worst of the worst when it comes to LGBT issues,” says Michael Cole Schwartz, a spokesman for the Human Rights Campaign, an LGBT rights group.

Last year McKeon told a C-SPAN interviewer that it was “worth not having a defense authorization bill” if it meant undermining the federal ban on same-sex marriage. This time, however, his spokesman wasn’t willing to go that far.

“It’s premature to start laying down markers,” McKeon spokesman Claude Chafin said. “We need to pass the bill out of the House first.” That vote is scheduled for Thursday. But even if Akin and Palazzo’s amendments fail to make it into the final bill, the House GOP’s war against the rights of gay and lesbian servicemembers seems to be here to stay.