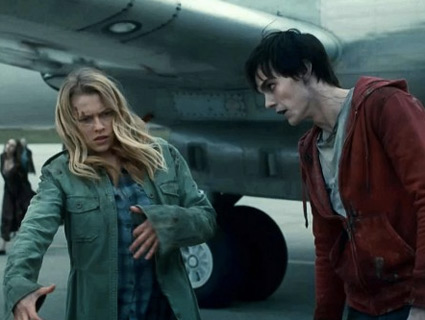 It’s refreshing to see a zombie movie that isn’t political in nature. Too often it seems as if every zombie (or zombie-ish) movie is a critique of consumer culture, or the War in Iraq, or widespread racism, or the federal government, or something else important.

Warm Bodies—based on this 2011 novel by Isaac Marion—is a zombie movie packed with synth-pop and classic rock that focuses on a forbidden love between a walking-dead male called “R” and a girl named Julie. (Get it???) The film takes place in a post-zombie-apocalypse America in which the humans hunker down in their fortress and the undead prowl the deserted cityscapes. “R” is a good-natured zombie who, as we learn through his voiceover narration, is always morally “conflicted” about his need to feed on human flesh and brains. After he meets Julie (during a bloodbath in an abandoned building during which “R” devours Julie’s current boyfriend), they soon start a romance that sets off a chain reaction that alters the fate of the post-apocalyptic world forever.

This is indeed a love-conquers-all type film—a genuinely charming date movie, but populated with gore-munching reanimated corpses. The two leads, Nicholas Hoult and, in particular, Teresa Palmer, shine as the young, perfectly likeable lovebirds who battle belligerent zombie hordes and dance to Springsteen on vinyl. Director Jonathan Levine (whose knack for genre thrills and comedy with darker shades was proven in films like 50/50 and All the Boys Love Mandy Lane) constructs a surprisingly effective and interesting romance from a gimmicky premise.

The film is the latest entry into the sub-sub-subgenre of the romantic zombie comedy, a.k.a. the “RomZomCom.” For your potential viewing interest, here are a few examples:

A RomZomCom that involves a prom and bombed at the box office. Philip Seymour Hoffman is in it, briefly. Watch the entire movie (which I actually kind of adore) here:

Another RomZomCom that involves a prom!

Now, check out the trailer for Warm Bodies:

Warm Bodies gets a wide release on Friday, February 1. The film is rated PG-13 for zombie violence and some language. Click here for local showtimes and tickets.