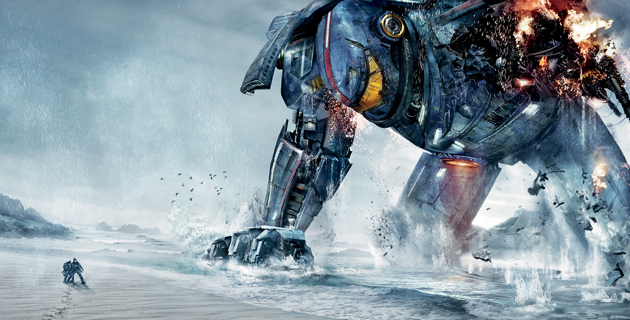 “Today we are canceling the apocalypse!” commanding officer Stacker Pentecost (played by the mega-talented Idris Elba) screams, rallying his troops as they prepare for the climactic battle in the war against alien aggressors.

The aliens in Pacific Rim are Kaiju, skyscraper-crushing colonizers from another dimension. The amphibious monsters emerge from a portal at the bottom of the Pacific Ocean, start flattening cities, kill tens of thousands of civilians, and kick off a world war. Nations set aside their differences in order to fight the new enemy as trusting allies (a common geopolitical theme in alien-invasion flicks) build gargantuan robots called Jaegers to defend humanity against its Godzilla-sized foes. The humanoid robots—whose appearances provoked the inevitable slew of Transformers comparisons—are each operated by two pilots in a cockpit inside their heads. The international Jaeger program trains an elite, ethnically diverse crew of scientists, technicians, and “rock star” fighters.

“Making Pacific Rim was a lot like what you imagined making movies would be like when you were 12,” screenwriter Travis Beacham said. And that it is. Director Guillermo del Toro makes the large-scale battle sequences thunderously exciting, and drenches them in neon and an urban visual poetry. The sci-fi epic is visually stunning in a manner practically made for IMAX 3D consumption. On top of that, it has heart and charm to spare, and it’s populated by likable and funny characters that audiences can genuinely care about (with fine performances all around, particularly from Elba, Rinko Kikuchi, Charlie Hunnam, and It’s Always Sunny in Philadelphia funnyman Charlie Day).

But here’s the kicker: In the same way that the real enemy in Michael Bay‘s action film The Rock is the US government and not the renegade general, the true culprit in Pacific Rim isn’t actually a sea monster from another dimension. It’s pollution. That’s the root cause of the apocalypse that the Jaeger pilots are charged with canceling.

In a short, yawn-and-you’ll-miss-it monologue toward the beginning of the film, Dr. Newton Geiszler (Day) explains why the Kaiju suddenly began cropping up. Geiszler has found definitive proof that during prehistoric times, the world-conquering creatures avoided our planet because they couldn’t stand the earth’s oceanic conditions or atmosphere. But as modern civilization pumped more and more pollutants into the Pacific and shredded the ozone layer, the human race made the world a hospitable environment for Kaiju to roam.

So there’s the moral of the story for you: Quit ruining the planet, or else malicious aliens the size of the Vatican will come and eat your hometown.

It’s a decent enough message. But since the film’s release comes in the same week we learned that pollution causes sharknados, I’m starting to sense some potential overkill coming from the entertainment-environmentalist complex. Or I suppose you could just enjoy the damn thing as—in the words of one American entertainer—a dazzling “Robots Punch Monsters” summer blockbuster.

And on that note, here’s a trailer for Pacific Rim:

Pacific Rim gets a wide release on Friday, July 12. The film is rated PG-13 for sequences of intense sci-fi action and violence throughout, and brief language. Click here for local showtimes and tickets.