Davis, who pitches for South Philadelphia’s Taney Dragons, received national attention last week when she threw a two-hit shutout and struck out eight in the Dragons’ Little League World Series opening victory over Nashville, Tennessee. On Sunday she became the sixth girl to get a hit in the LLWS, a first-inning RBI single that helped Philadelphia to a 7-6 win over Pearland, Texas.

And the 5-foot-4 right-hander’s fastball, clocked at 71 mph, is roughly equivalent to a 93 mph pitch thrown on a big-league-size field.

But Davis’ Sports Illustrated appearance isn’t just unusual for her age: It’s also damn-near impossible for a female to make the magazine’s cover. Discounting the women dressed only in leis and inner tubes for the annual swimsuit edition, about 95 percent of SI covers feature men. An analysis of 716 covers from 2000 to 2011 found:

And this trend doesn’t appear to have reversed since 2011: A quick glance at SI‘s 2014 cover gallery shows that just five female athletes have graced the cover prior to Davis this year.

Davis told ESPN she plans to play basketball at UConn and eventually in the WNBA. When a Fox News anchor asked why she doesn’t play a “more female friendly sport,” like soccer, last week, she seemed surprised. “Well, I play soccer actually, but I don’t consider it as my favorite sport…But soccer is fun.”

As Albert Chen writes in the Sports Illustrated story, “She’s a lot of things to a lot of different people, all of them good things: a totem for inner-city baseball, a role model for your 10-year-old niece, a role model for your 10-year-old nephew. Most of all, she’s a laid-back kid just having a really good time.” NBA superstar Kevin Durant was just one of a number of pro athletes to tweet their support: “This youngster is striking everyone out and she is a girl. I love it.”

Davis told the Philadelphia Inquirer that “the attention should not just be on one girl; more girls should join boys’ teams so it is a tradition and it won’t be so special.” She is expected to take the mound again Wednesday, when Philadelphia faces off against Las Vegas. 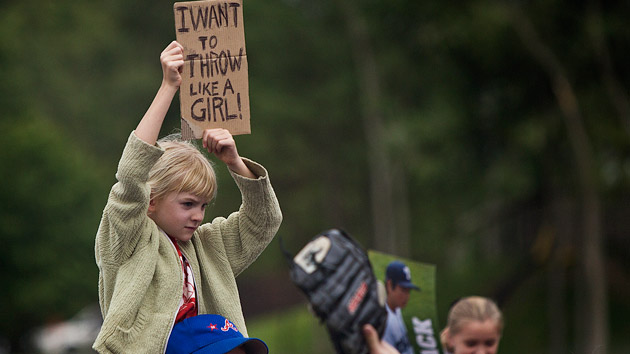 A young fan shows her support of Mo’ne Davis after the team’s 4-0 win over Nashville in the LLWS. Sean Simmers/AP