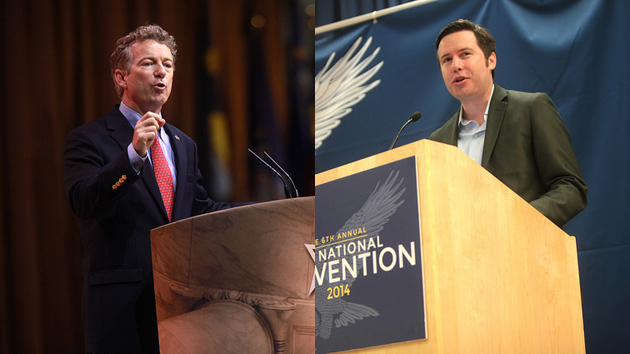 This week, the Ron Paul-led Campaign for Liberty hosts its fourth annual Liberty Political Action Conference, and the speaking list features a roster of well-known Republican politicians and libertarian activists. The biggest draw of this year’s LPAC will undoubtedly be Sen. Rand Paul (R-Ky.), who each day inches closer to a 2016 presidential run. Slated to speak at the same event, though, is Paul’s ex-aide Jack Hunter, who the senator fired after his past as a neo-Confederate advocate was revealed.

Hunter used to be the social media director in Paul’s Senate office, and he co-wrote Paul’s 2010 book, The Tea Party Goes to Washington. But in 2013, the Washington Free Beacon revealed that Hunter, under a different identity, had long been involved with the neo-Confederate and southern secessionist movements. For 13 years, Hunter was a South Carolina talk radio host who called himself the “Southern Avenger.” In public, he wore a luchador mask bearing a Confederate flag. As the Avenger, Hunter made many a provocative remark, including arguably racist comments. He said that John Wilkes Booth’s heart was “in the right place” and that he celebrated Booth’s birthday every year. He claimed that Abraham Lincoln would have been romantically drawn to Adolf Hitler. He called the NAACP a “malicious hate group” on par with the KKK. He contended that a “non-white majority America would simply cease to be America.”

Hunter also chaired an organization called the League of the South, which advocated “the secession and subsequent independence of the Southern States from this forced union and the formation of a Southern republic.” The Free Beacon reported,

“The League of the South is an implicitly racist group in that the idealized version of the South that they promote is one which, to use their ideology, is dominated by ‘Anglo-Celtic’ culture, which is their code word for ‘white,'” said Mark Pitcavage, the director of investigative research at the [Anti-Defamation League]. The ADL said it does not necessarily classify it as a hate group.

The League of the South maintains that it is not racist and does not discriminate in terms of membership.

“When I was part of it, they were very explicit that’s not what they were about,” Hunter told the Free Beacon. “I was a young person, it was a fairly radical group—the same way a person on the left might be attracted in college to some left-wing radical groups.”

After Hunter was unmasked, Paul said that his Southern Avenger commentaries were “stupid” and canned him. A few months later, Hunter wrote a story titled “Confessions of a Right-Wing Shock Jock” and distanced himself from his old comments. “I said many terrible things,” he wrote. “I disavow them.”

Now, Hunter is back in the fold and back on the speaker’s list in the liberty movement presided over by Ron and Rand Paul. The Campaign for Liberty bills him as “the one and only Jack Hunter.” Hard to argue with that.