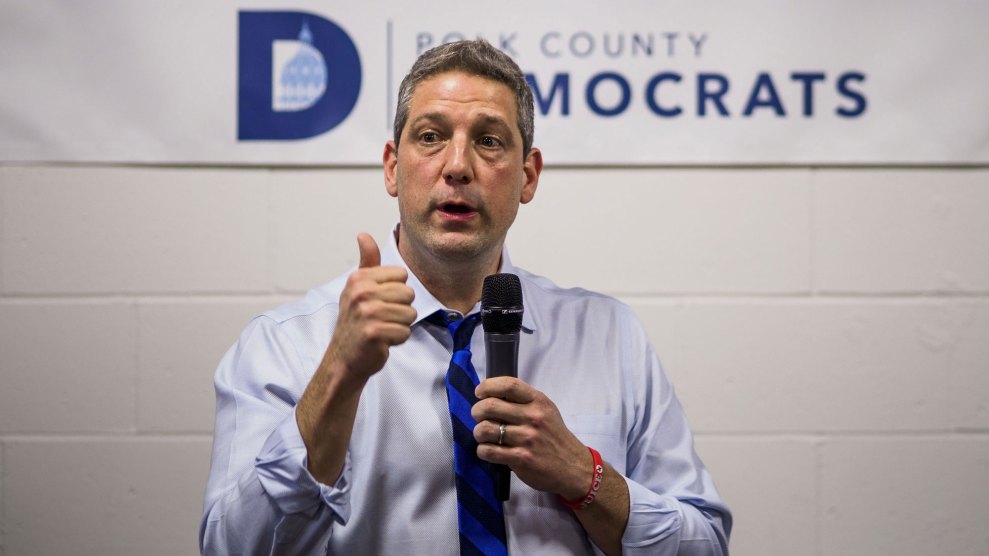 At a 2018 question-and-answer session at a summit for wellness influencers in San Diego, an attendee wanted to talk to Tim Ryan about fluoride.

Ryan, a Democratic congressman from Northeast Ohio, had co-sponsored a resolution in 2015 hailing water fluoridation as a public health triumph. But the woman told Ryan that water fluoridation had given her severe acne. And as she recounted her subsequent investigation into its effects, Ryan’s position appeared to soften.

“Well you’ve already got me to reconsider,” Ryan told her. “I want to get you with my staff.”

“That’s government in action right there, folks,” he continued after the audience applauded. “We’ll get on it. And the stories—that’s how you move people, with stories.”

At that point, the moderator of the town hall, Mark Hyman—an Ohio physician who wrote the preface to Ryan’s second book—chimed in. “And it’s not just acne,” he said. “There’s many, many issues with fluoride.”

Ryan was “simply being polite in his response to a very impassioned statement regarding fluoride in the water,” a spokesperson told Mother Jones in a statement last week. “Of course he supports continuing to fluoridate our water and believes fully in its health benefits.” But his initial response—and the fact that he was there at all—speak to a delicate balancing act at the heart of his political identity.

The 45-year-old Ryan, who announced his candidacy for president last Thursday after years of flirting with a bid for higher office, has cultivated a national reputation as a champion of the Rust Belt, arguing that to take back Washington, Democrats must listen to the “70-year-old Teamster” in places like his native Mahoning Valley. But Ryan’s politics goes beyond picket lines; he wrote a book about how meditation can help “recapture the American spirit,” and has talked up his plans to win the “yoga vote” in 2020. And his personal interest in mindfulness and nutrition has brought him into the orbit of a pair of controversial health theorists, Hyman and wellness blogger Vani Hari, who have taken aim not just at familiar foes like fast food, but pillars of public-health policy. Ryan has blurbed their books, joined them at events, and highlighted their work in his own writings.

Perhaps the most famous name in Ryan’s circle is Hari, better known as the Food Babe. A former financial consultant, Hari began writing about food in earnest about a decade ago, and quickly blew up, turning her small blog into a media empire with two books and more than a million followers on Facebook. Hari’s big idea is that everything is full of chemicals and that those chemicals are bad for you. To fight back, she organizes pressure campaigns against restaurant chains to get them to change (and disclose) their ingredients. At the 2012 Democratic National Convention, Hari interrupted former Iowa Gov. Tom Vilsack’s speech to heckle him about genetically modified foods. This has made her a hero in certain circles—and one of her biggest fans is Ryan.

The congressman devoted several pages of his 2014 book, The Real Food Revolution: Healthy Eating, Green Groceries, and the Return of the American Family Farm, to praising Hari’s activism. He lauded her successful pressure campaigns against Kraft foods (over a dye it used in macaroni and cheese) and Subway (for using a chemical in its bread that is also found in yoga mats).

Hari’s 2015 book, The Food Babe Way: Break Free From the Hidden Toxins in Your Food, and Lose Weight, Look Years Younger, and Get Healthy in Just 21 Days, featured a blurb from Ryan: “The Food Babe is a one-woman consumer protection agency,” he wrote.

But by that time Hari was already a polarizing figure in the food community. A 2014 NPR story, “Is the Food Babe a Fearmonger?,” quoted Yale neuroscientist Steve Novella calling her “the Jenny McCarthy of food”—a reference to the actress’ famously inaccurate claims that vaccines are dangerous. Among other things, the story noted that Hari—who has no background in food science or nutrition—had accused beer manufacturers of using a chemical found in antifreeze in their suds. But in fact, the beer additive, which is derived from kelp, was a different chemical with a similar name.

Hari has called people who get flu shots “lemmings” and warned readers that they should think twice about getting inoculated from the deadly illness because it might contain mercury or egg products, among other additives, and suggested (falsely) that the flu vaccine can lead to Alzheimer’s.

“I won’t eat any of these ingredients or even put them on my body – however, the mainstream medical community, government agencies and pharmaceutical companies suggest that I directly inject these ingredients into my bloodstream?,” she wrote in 2013. “And I need do it every year until I die?  Are you freaking kidding me?” (At the end of the post, she clarified that she was, nonetheless, “not ‘anti-vaccination.’”)

Hari’s critics often point to a since-deleted 2011 post in which she asserted that airlines cut costs by pumping in air that “isn’t pure oxygen” and is instead “mixed with nitrogen, sometimes almost at 50%” In reality, the air we breath every day is mostly nitrogen.

Another guru in Ryan’s circle of experts is Mark Hyman, a doctor at the Cleveland Clinic, and the moderator of the town hall at which Ryan was asked about fluoride. Hyman, like Hari, has a sizable public following. His books have hit the New York Times bestseller list and he’s been a guest of Dr. Oz and Katie Couric. He counts the evangelical mega-pastor Rick Warren, and Bill and Hillary Clinton as friends—Hyman has been credited with convincing the 42nd president to ditch his veganism.

There’s plenty in what Hyman preaches that’s innocuous, even helpful. He wants you to eat a lot less sugar, and you probably should. But Hyman has gone down some paths that the mainstream medical community rejects. In 2010, Hyman published an essay titled, “Why Current Thinking About Autism Is Completely Wrong.” “The real reason we are seeing increasing rates of autism is simply this: Autism is a systemic body disorder that affects the brain. A toxic environment triggers certain genes in people susceptible to this condition. And research supports this position.”

To illustrate what he meant, he used the example of a kid named Sam. Sam “was born bright and happy, was breast-fed, and received the best medical care available (including all the vaccinations he could possibly have). He talked, walked, loved, and played normally—that is, until after his measles, mumps, and rubella vaccination at 22 months.” Hyman argued that the volume of vaccines had either overwhelmed his immune system or had overexposed him to thimerosal, a mercury-based preservative used in vaccines—but in either case, the vaccines had created the conditions by which autism took root.

In 2014, Hyman worked with Robert Kennedy Jr. on his book Thimerosal: Let the Science Speak: The Evidence Supporting the Immediate Removal of Mercury—a Known Neurotoxin—from Vaccines, writing the preface and joining him on Capitol Hill to make the case for it. Vaccine skeptics have for years seized on thimerosal as a possible link between childhood shots and autism, but no study has ever shown a connection. (In a blog post promoting the book, Hyman called himself “aggressively pro-vaccine” and acknowledged that a link between thimerosal and autism “has not been definitively proven,” but argued that the preservative should be removed because it’s a toxin.)

But the backlash to vaccinations has had public health consequences of its own. An increasing number of parents claiming exemptions to mandatory measles vaccinations has left communities susceptible to outbreaks, such as the one currently roiling Michigan.

Hyman has also pushed back against the use of fluoride. In August 2018, his Broken Brain podcast brought on a biological dentist —like an alternative medicine practitioner for teeth—to explain why it was a mistake to put fluoride in the water supply. As Hyman put it in the show notes: “Why does the ADA still promote fluoride usage even though we have data showing it’s a neurotoxin—and there is no developmental need for it?”

Though it has long been a magnet for conspiracies, dentists consider fluoride essential for the reduction of cavities. The Centers for Disease Control and Prevention has called fluoride one of the most significant public-health achievements of the 20th century.

But Ryan has embraced Hyman as an ally in his fight for a better food policy. They blurbed each other’s books. Hyman calls Ryan “transformational”; Ryan calls Hyman “the LeBron James of medicine.” And Ryan brought Hyman to Washington, DC, to help him make the case for a piece of legislation, the ENRICH Act, which would fund nutrition and lifestyle training for doctors. Ryan even introduced the doctor to Irish Prime Minister Enda Kenny on St. Patrick’s Day. The exclusive Mindshare Summit in San Diego, where Ryan answered the question about fluoride, was at least the third town hall they’d done together.

In a statement, a Ryan spokesperson called the congressman “a long time supporter of mandatory vaccinations,” and added that Ryan and his wife, Andrea, have vaccinated their own kids.

“As for Dr. Mark Hyman, Vani Hari, or anyone else for that matter, just because they were referenced in Ryan’s book on healthy food does not mean he endorses every stance they have taken in the past or will take in the future.”