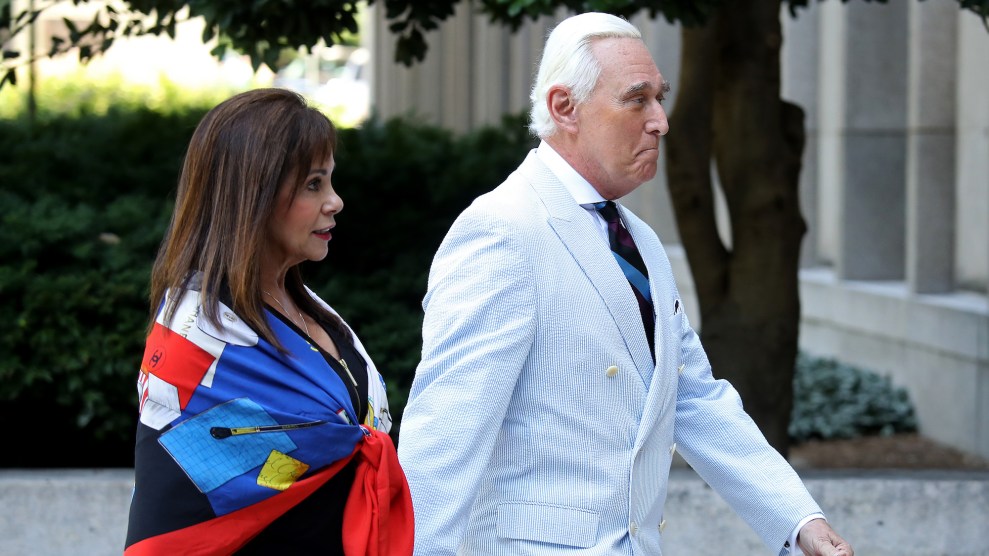 A federal judge banned Roger Stone from using popular social media platforms after finding he had repeatedly violated her order barring him from publicly commenting on the case against him, but she stopped short of exercising her power to jail him by revoking his bond.

“You may not post on Instagram, Twitter, or Facebook in any way, on any subject, at any time,” US District Court Judge Amy Berman Jackson told the longtime adviser to Donald Trump on Tuesday. Stone also remains barred from making other public comments on the proceedings. Jackson found that Stone had violated her February 21 order barring him from publicly commenting on the case against him. Jackson said that because Stone can’t or won’t follow her orders, “I have to help you out.”

Stone is charged with obstruction of justice, witness tampering, and making false statements in testimony to Congress. He is scheduled to face trial in November.

Prosecutors cited 11 instances in which Stone has seemed to violate Jackson’s instructions by commenting on the case or attacking people involved with it. These included an Instagram post showing an image of Stone wearing eyeglasses under the words “Who Framed Roger Stone,” a reference to the 1988 film Who Framed Roger Rabbit. In other instances, Stone faulted news media outlets for their reporting, or lack of reporting, on his case. In May, he attacked a Politico article about him by dubbing its authors “elitist snot-nosed fake news shitheads who’s specialty is distortion by omitting key facts to create a false narrative.”

Stone also admitted that he had sent a text message to a BuzzFeed reporter in late February to contest claims that Trump lawyer Michael Cohen made about him in congressional testimony.

Stone’s attorneys argued that he merely reposted articles on Instagram, and in some cases attacked news outlets for failing to cover aspects of his case. They claimed such posts are not themselves commentary on the legal proceedings.

Jackson was unpersuaded. “The clarity of my order is undisputed,” she said, noting that Stone has not challenged her order on First Amendment grounds.

This is the second time that Jackson found Stone in violation of her orders since his arrest in January. In February, Stone admitted he had violated an earlier, more permissive restriction on his public comments by posting an image of Jackson’s head with what appeared to be a target next to it. He apologized to Jackson in a hearing at that time, and the judge warned Stone at the time that he would not get a second chance.

But on Tuesday, she said she would not revoke his bond, while noting she could still decide to do so.

The judge appeared aware that jailing Stone could make him a cause célèbre on the right—status he seems to court. “This defendant appears to seek attention,” Jackson said. His posts, she added, appear possibly intended “to prompt me to react in a way that will get him more attention.”

“It seems as if once again I am wrestling with behavior that has more to do with middle school than a court of law,” she said.