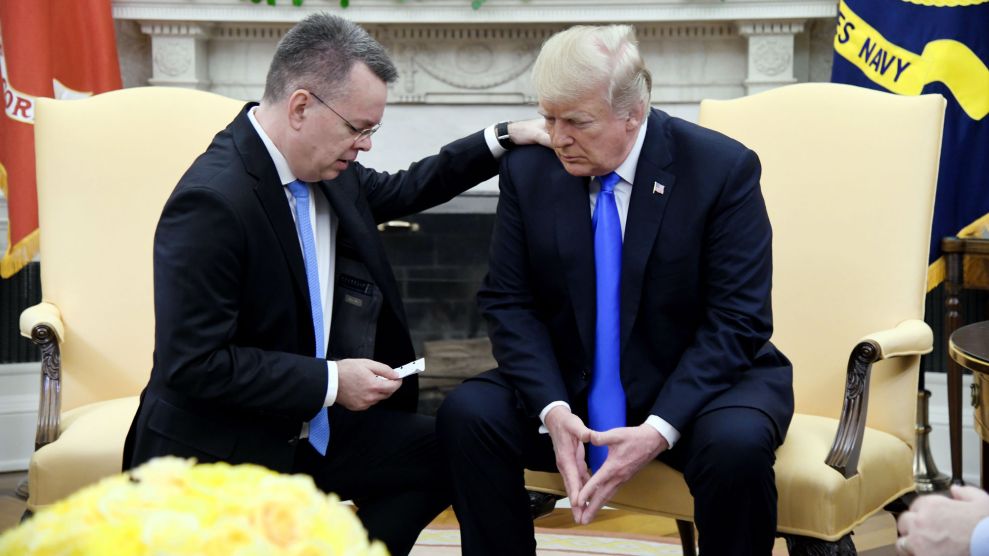 Pastor Andrew Brunson prays for President Donald Trump after being released from Turkish custody. Both Brunson and Trump were represented by Jay Sekulow.Olivier Douliery/CNP via ZUMA

Rudy Giuliani has drawn substantial scrutiny in recent months over his alleged efforts to run a shadow foreign policy for Donald Trump in Ukraine. But the former New York City mayor isn’t the only lawyer for Trump who has become involved in a US foreign policy matter. Last year, Jay Sekulow, while serving as a personal attorney for Trump, was in repeated contact with a prominent lobbyist who was pushing to help Turkey’s national bank avoid prosecution by the Justice Department for its alleged role in a scheme to evade US sanctions on Iran.

“I wanted to make sure our guy was alive.”

In foreign lobbying disclosures filed with the Justice Department last year, Brian Ballard—who runs a high-powered firm that represented both the government of Turkey and its national bank—revealed that he had exchanged phone calls and text messages with Sekulow on six occasions between July and October 2018. At the time, Sekulow was busy defending Trump against special counsel Robert Mueller’s Russia investigation. But Sekulow says he wasn’t speaking for Trump in his conversations with Ballard. Rather, he says, he was involved in the exchanges because his nonprofit organization, the American Center for Law a Justice, was representing pro bono Andrew Brunson, a pastor who was imprisoned in Turkey in 2016 and released on October 12, 2018.

Ballard’s filing lists the purpose of his conversations with Sekulow as “US-Turkey relations” and identifies Sekulow not as the president’s lawyer, but as chief counsel for the ACLJ, which works on evangelical causes. The filling doesn’t specify whether Ballard was acting on behalf of Turkey, its national bank, or both.

The communication occurred at a time when Ballard and other lobbyists at his firm were pressing the White House, the State Department, and Congress to ask the Justice Department not to prosecute the Turkish bank—known as Halkbank—over allegations that could result in heavy fines. Halkbank is accused of using front companies to help Iran evade US sanctions related to oil and gas sales and financial transactions. Ballard also sought to protect the bank from possible Treasury Department penalties.

“We made the case over a period of a year or more to the US government that in considering the case of Halkbank, it was important to remember that they are a NATO ally and the bank was very important to their financial system and their economy and that needed to be taken into account in any decision that was made,” Jamie Rubin, a former State Department spokesman who now works for Ballard told Mother Jones.

Courthouse News reported earlier this week on Ballard’s lobbying effort for Halkbank and his contacts with Sekulow.

In interviews with Mother Jones, Sekulow said he had only a limited recollection of his contacts with Ballard, but he noted that the lobbyist had spoken with him at a time when Brunson was extremely ill and his advocates were especially eager to secure his freedom. “He had lost like 65 pounds,” Sekulow said. “I wanted to make sure our guy was alive.”

Asked if Ballard hoped to arrange a deal linking Brunson and Halkbank, Sekulow said he had no memory of Ballard even mentioning the Turkish bank. “If it had come up, I wouldn’t know how to respond to it,” Sekulow said, adding that he had no power to influence US policy toward Turkey and did not participate in any negotiations over what the United States might offer Turkey in exchange for Brunson’s freedom. “I never spoke to the Justice Department about it or any agency that could be involved in that kind of thing,” Sekulow said.

During the same period, Sekulow was also representing Trump, who took a personal interest in Brunson’s case. Sekulow said he discussed the pastor’s plight frequently with the president and also spoke about the issue on multiple occasions with Vice President Mike Pence, who was involved in the negotiations over Brunson’s fate. In July 2018, Trump tweeted a threat to “impose large sanctions on Turkey for their long time detainment” of Brunson. The following month, Trump doubled steel and aluminum tariffs on Turkey, and the Treasury Department sanctioned two Turkish officials over the Brunson matter.

“The entire Halkbank context was in terms of freeing Pastor Brunson.”

On October 11, 2018, NBC News, citing unnamed administration officials, reported that Brunson was being freed as part of a “secret deal” that included “a commitment by the US to ease economic pressure on Turkey.” The next day, a Turkish court convicted Brunson on charges of supporting terrorism but sentenced him to time served and ordered him released. Brunson’s return home may have boosted Trump’s standing with evangelical Christians, a key group of supporters for the president. Trump boasted about it at a campaign rally hours after Brunson was freed and then hosted the pastor at the White House, where Brunson prayed for Trump as cameras rolled.

Two people involved in the talks over Halkbank told Mother Jones that there was no firm agreement linking Brunson to Halkbank’s case, but that Brunson’s release, by improving relations between the US and Turkey, helped the bank make its case to the administration.

“The entire Halkbank context was in terms of freeing Pastor Brunson,” one of those sources said. “If Pastor Brunson was freed, then there would be great incentive on both the American and Turkish side to improve relations.”

Brian Ballard did not respond to questions emailed to an assistant.

Brunson’s 2016 arrest came in the aftermath of a failed coup attempt against Turkish President Recep Tayyip Erdogan. As part of a massive roundup of Erdogan’s perceived enemies, Brunson was accused of crimes that included supporting the banned Kurdistan Workers Party, which Turkey considers a terrorist group. Brunson denied the allegations, which were widely viewed as politically motivated.

In 2017, Erdogan pushed for a swap in which Turkey would free Brunson in exchange for the US extraditing Fetullah Gulen, an Islamic cleric who lives in Pennsylvania. Erdogan accuses Gulen of encouraging the coup attempt, which was carried out by alleged Gulen adherents in Turkey’s armed forces.

Giuliani in 2017 also urged Trump to hand Gulen over to Turkey, the Washington Post reported last week. Those conversations reportedly occurred around the time Giuliani was representing Reza Zarrab, a Turkish citizen prosecuted for evading US sanctions on Iran. Giuliani reportedly pressed Rex Tillerson, then the secretary of State, to ask the Justice Department to drop its probe into Zarrab in exchange for Brunson’s return. Zarrab later agreed to plead guilty and cooperated with investigators, providing information they ultimately used to make a case against Halkbank and individual Turkish officials involved in the alleged scheme. After his plea, it was Halkbank, not Zarrab, that Erdogan wanted out of the Justice Department’s crosshairs.

According to Bloomberg, Erdogan repeatedly brought up the bank in calls with Trump, who told Erdogan that Attorney General William Barr and Treasury Secretary Steve Mnuchin would handle the issue. Trump asked Barr and Mnuchin to work with Secretary of State Mike Pompeo on the matter, the news organization reported.

Lobbyists for Turkey, including Ballard and King & Spalding, a law firm, were also on the case. Ballard, who has turned his longstanding relationship with Trump into a thriving practice in Washington, met on July 24, 2018, with Pence’s then-chief of staff, Nick Ayers. The vice president, who functions as Trump’s emissary to evangelicals, had a key role in attempting to negotiate Brunson’s release. Ballard was in contact with Ayers and Pence aide Matthew Morgan in the weeks prior to Brunson’s release.

Whatever Ballard gained for Halkbank was undercut three weeks ago, after the infamous phone call in which Trump indicated that Erdogan could go ahead with an invasion of northern Syrian. The move drew a furious response from members of both US political parties. The White House responded by scrambling to negotiate a cease fire and announcing sanctions on Turkey.

The next day, Geoffrey Berman, the US attorney for the Southern District of New York, unveiled a six-count indictment of Halkbank for “fraud, money laundering, and sanctions offenses related to the bank’s participation in a multibillion-dollar scheme to evade US sanctions on Iran.” Berman did not tie the prosecution to the Syrian invasion. A spokesman for the office declined to respond to questions about whether Barr or other administration officials had previously asked Berman to hold off on prosecuting the bank.

Halkbank, which denies the charges, said in in statement that they were “filed as part of the sanctions introduced against our country by the US government” and called the indictment “an unprecedented legal overreach.”

Following the indictment, Ballard’s firm filed paperwork terminating its role as Halkbank’s lobbyist. “With this case having settled into the judicial system, we believe that this is the appropriate time to end our representation,” Rubin said.