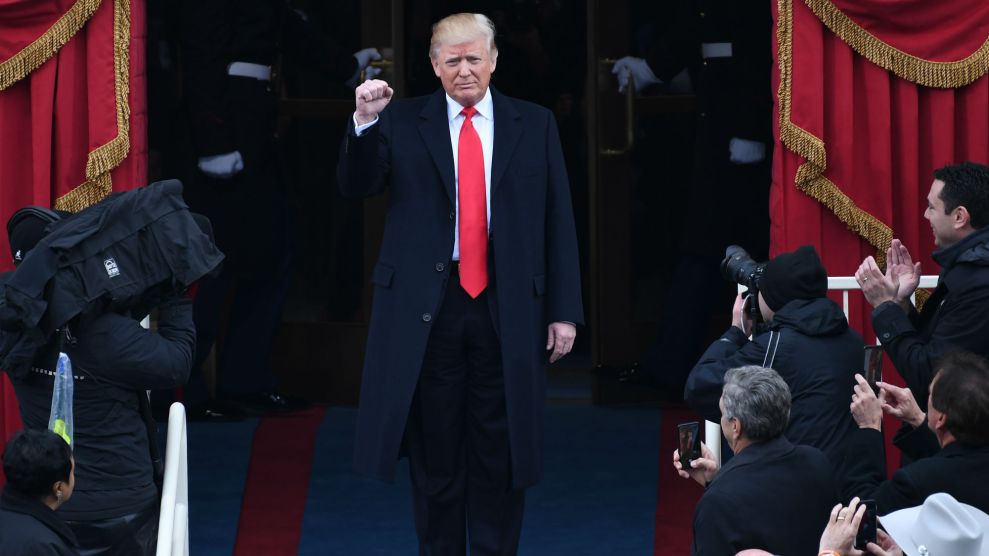 A California businessman who gave $900,000 to President Donald Trump’s inaugural committee has agreed to plead guilty to a veritable foreign lobbying crime spree.

Over the better part of a decade, Imaad Zuberi solicited money from foreign people and firms to donate to US political campaigns and he promised to influence American politicians on those foreigners’ behalf, both of which are illegal. But he didn’t actually spend all the money on lobbying: It turns out he personally pocketed much of the money—also illegal—according to an announcement from federal prosecutors in Los Angeles on Tuesday. While the criminal charges relate to activity that Zuberi engaged prior to Trump’s election, prosecutors describe Zuberi’s inaugural donation as part of years long effort to gain “access to high-level US officials.”

Zuberi, who operates a Los Angeles-based venture capital firm called Avenue Ventures, has agreed to plead guilty to tax evasion, to filing phony foreign agent registration materials, and to “making almost $1 million in illegal campaign contributions that included funneling money from foreign entities and individuals to influence U.S. elections,” according to prosecutors. They also say he promised foreign nationals and governments that “he could use his influence in Washington, D.C. to change United States foreign policy and create business opportunities for his clients and himself.”

According to the document outlining charges against Zuberi, in 2014 he convinced Sri Lanka to pay him an astounding $8.5 million to help the country improve its image in the United States. Zuberi appears to have pocketed all but $850,000 of that fee. He eventually registered with the Justice Department as a lobbyist for Sri Lanka, but prosecutors say the paperwork was riddled with false statements.

The prosecutors’ filing describes an array of unnamed foreign individuals and clients from whom Zuberi solicited consulting and other fees, and it lists dozens of contributions he made to US politicians from 2012 to 2016 using foreign funds. The campaigns are not identified, but Zuberi gave largely to Democrats, including Hillary Clinton’s 2016 presidential campaign.

After Clinton’s loss, Zuberi switched to backing the GOP, including his large donation to Trump’s inaugural. This contribution appears to have drawn notice from the US Attorney’s office in Manhattan, which subpoenaed Trump’s inaugural committee early this year for any documents and communications it had with Zuberi. At the time of his inaugural donation, Zuberi was working to help officials from Qatar develop ties the new Trump administration. We reported on this and Zuberi’s connections to Trumpworld back in February:

On December 11, 2016, Ahmed al-Rumaihi, then the head of a branch of Qatar’s $320 billion sovereign wealth fund, dined with President Donald Trump’s longtime personal lawyer, Michael Cohen, at Manhattan’s Peninsula Hotel on Fifth Avenue. The men discussed possible investments by the Qatari fund in public-private partnerships that the incoming Trump administration hoped to establish to bankroll infrastructure projects—and, Al-Rumaihi later claimed, Cohen requested a $1 million fee for linking the Qataris with US investment partners. Also present at the dinner, according to a spokeswoman for Al-Rumaihi, was Imaad Zuberi, a Pakistani American businessman who has come under scrutiny by federal prosecutors probing donations to Trump’s inaugural committee.

On Monday, Zuberi was named in a subpoena sent by the Manhattan US Attorney’s Office to the inaugural committee, to which Zuberi donated $900,000 in late 2016. The subpoena seeks documents related to communications with Zuberi’s Los Angeles-based private equity firm, Avenue Ventures, according to several reports. The move suggests that prosecutors are looking into whether the committee received illegal foreign donations, potentially made by Americans acting as straw donors to mask foreign money.

Through a spokesman, Zuberi said he did not recall attending a meeting with Cohen and al-Rumaihi. Still, the episode is one of a series during the presidential transition in which Zuberi was involved in efforts by Qatari officials to contact top Trump advisers. The Qatari outreach was part of an influence campaign targeting the Trump administration as the Gulf state sought to convince the US government to back it in a diplomatic feud with regional rivals, including Saudi Arabia and the United Arab Emirates.

Zuberi told Mother Jones that he had in fact hoped to broker and earn commissions on deals in which Qatar’s deep-pocketed sovereign wealth fund invested in US projects. At the time, Zuberi denied wrongdoing and claimed he had no clue why federal prosecutors were interested in him. It’s not clear where the Manhattan investigation stands or how the subpoena mentioning Zuberi might relate to California case.

Read the criminal information below: