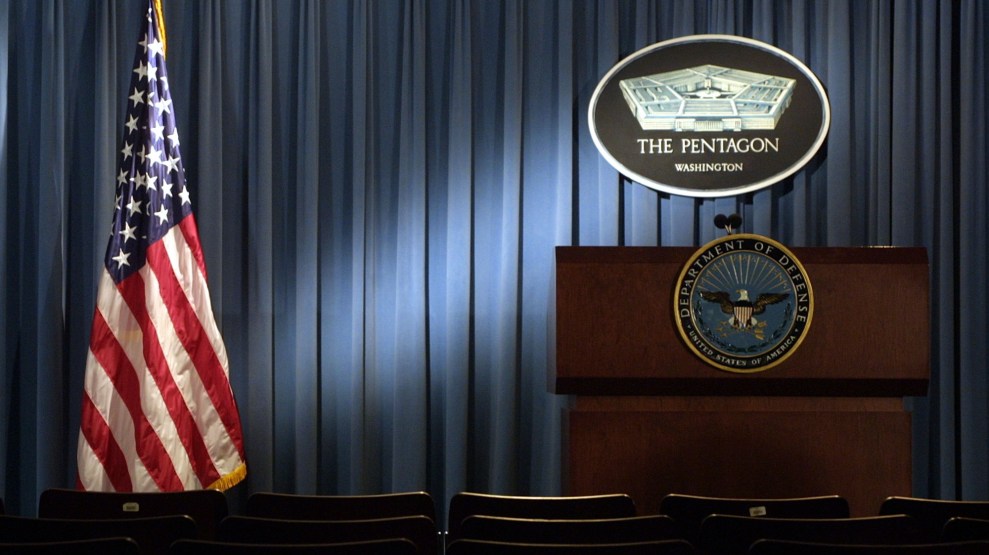 Few things are clear about next year’s defense spending authorization bill—when Congress will be able to debate it, when it will be approved, when President Donald Trump might sign it. The only certainty, at a time when the coronavirus crisis has upended almost every known quantity in Washington, is that progressive Democrats are going to hate this legislation.

Every spring, Congress puts together a mammoth bill that is supposed to authorize the Defense Department’s spending for the next fiscal year, but usually contains dozens of unrelated amendments that help shape the federal government’s national security policy. For decades, lawmakers passed the bill, known as the National Defense Authorization Act—or NDAA—with strong bipartisan majorities and avoided prolonged debates over controversial policy matters.

That changed last year when the progressive flank of the House Democratic caucus pushed to include amendments limiting Trump’s ability to spend Pentagon funds on his border wall, preventing him from starting a war with Iran without congressional approval, and ending American support for Saudi Arabia’s war in Yemen, among other things. None of those provisions made it into the compromise bill, which emerged after negotiations with the Republican-controlled Senate. In the end, progressives were left feeling discouraged.

This year’s debate originally presented an appealing opportunity for progressives in the House to extract concessions from Senate Republicans. Nearly every major Democratic presidential candidate has spent months calling for a rethinking of American national security strategy, which has been dominated by endless wars in the Middle East. Even Joe Biden—the presumptive nominee, who is distrusted by many on the left—acknowledged to Military Times that the Pentagon “can maintain a strong defense and protect our safety and security for less.” Meanwhile, the Center for International Policy’s Sustainable Defense Task Force—composed of former government budget analysts, retired military leaders, and other experts—determined that the United States could save at least $1.25 trillion over the next decade by trimming the size of the military by 10 percent, eliminating waste and redundant positions, and halting the Trump administration’s massive investment in nuclear weapons.

And now, the death toll and economic devastation caused by the coronavirus has reinforced the fact that there are urgent national priorities and security threats not named Russia, Iran, or ISIS that might require some of the resources normally reserved for the military. With the pandemic wreaking havoc on the US Navy, there would, perhaps, be no better time than this year to craft a compelling message against maintaining the Pentagon’s status quo.

But structural obstacles—including a lengthy, coronavirus-caused delay that is expected to push the passage of the bill into the next fiscal year—will probably make any significant changes near impossible. “There will probably be a prejudice within the leadership and the Congress to dispense with the NDAA as expeditiously as possible,” Bill Hartung, director of the Center for International Policy’s Arms and Security Program, told me. Hartung is one of many advocates for a slimmer defense budget who views the pandemic as an appropriate moment to reset the eternal debate over how to spend the Pentagon’s money. But, because of the truncated schedule lawmakers now face, he doesn’t expect reformers will have as many opportunities as last year to attempt to amend the NDAA.

Progressive advocates who are in touch with the committee staff crafting the House version of the bill have also tempered their expectations. “It is very, very likely we’re going to see an NDAA that reflects business as usual,” a source affiliated with a group that works on military issues told me, adding that this year’s legislation “is just not designed” to encompass the vision progressives had for last year’s bill.

The primary architect of the the House bill will be Rep. Adam Smith (D-Wash.), who chairs the Armed Services Committee. Last year was his first time shepherding the NDAA process, and he was evidently no fan of how the debate unfolded. Liberal lawmakers stacked the bill with contentious policy provisions, resulting in a rare party-line vote in committee, zero Republican support from the rest of the House, and a compromise negotiation with the Senate that left progressive leaders like Sen. Bernie Sanders (I-Vt.) and Rep. Ro Khanna (D-Calif.) blasting the legislation’s “astonishing moral cowardice.” An exasperated Smith told Politico at the time that he would be “a lot more critical” in the future of lawmakers trying to insert amendments that were “not within our jurisdiction.”

While the delay in moving forward with the NDAA could open the door to pandemic-related provisions that shore up the Pentagon’s response to the virus, it’s not likely the bill will be as expansive as in previous years. “I think there is a renewed resolve, certainly by both Adam and me, to confine our bill to our issues, and not allow it to be a vehicle for lots of other wish lists that are not able to make it through” other committees, Rep. Mac Thornberry (R-Texas), the committee’s top Republican, told Defense News earlier this month. “Having gone through last year, everybody has a better understanding of what is and is not doable with a Democratic House and a Republican Senate and a Republican president.”

In a statement, a spokesperson for Smith said the chairman “understands and shares the concerns” of House liberals, “as well as those of other” House members. But this time around, progressive lawmakers say they aren’t going to support a bill without assurances that their priorities will be included in the final product. “The progressives are not going to pass a House NDAA to give them license to strip all the progressive priorities from the bill, as it was last time. The leadership is going to have to make a choice,” Khanna, an Armed Services Committee member, told reporters on a conference call Tuesday. “They’ll either pass a progressive NDAA or pass a bill with Republican votes.”