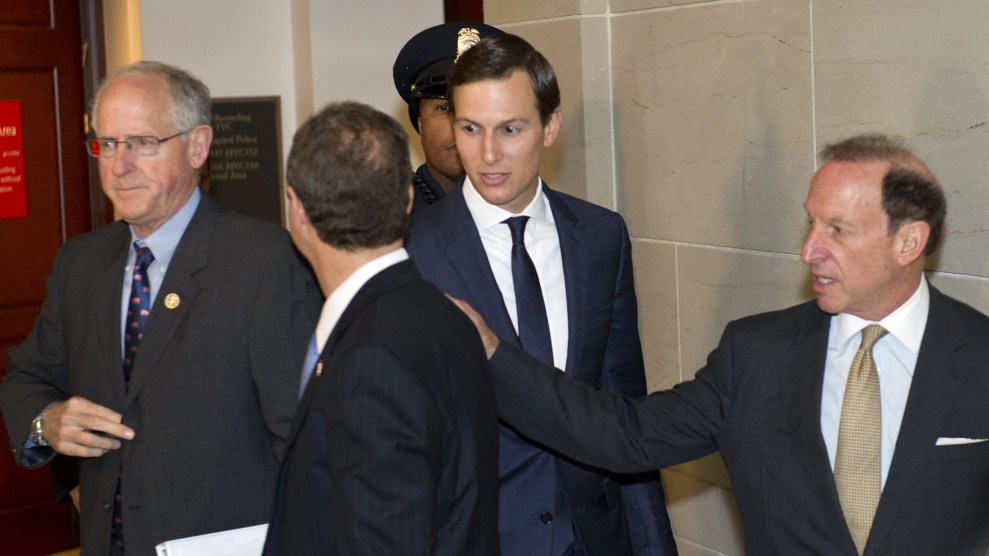 Jared Kushner after testifying before the House Intelligence Committee on July 25, 2017.Ron Sachs/CNP via Zuma

While President Trump uses Attorney General William Barr to try to erase the story of his 2016 campaign’s contacts with Russia, information showing that Trump insiders stonewalled or misled investigators probing the Trump-Russia scandal continues to emerge.

Last week, the House Intelligence Committee released a transcript of a once behind-closed-doors interview with Jared Kushner in which Trump’s son-in-law evaded a question about his relationship with Rick Gerson, a New York hedge-fund manager and a longtime friend of Kushner. In a curious move, Kushner downplayed his link to Gerson, who in late 2016 and early 2017, due to his connection to Kushner, was mixed up in secretive contacts between the incoming Trump administration, the United Arab Emirates, and Russia—a weird series of actions that were investigated by special counsel Robert Mueller.

Here’s what happened. On July 25, 2017, Kushner had a private interview with the House Intelligence Committee, which then was controlled by Republicans and running a less-than-vigorous investigation of the Trump-Russia scandal. During the three hours session, Rep. Adam Schiff (D-Calif.), the panel’s top Democrat, asked Kushner about a December 2016 meeting he attended in Manhattan’s Four Seasons hotel with the effective ruler of the United Arab Emirates, Sheikh Mohammed bin Zayed, known as MBZ. This meeting, also, attended by Trump advisers Steve Bannon and Michael Flynn, later drew notice because the Emiratis attempted to meet with the Trump crew without alerting the Obama administration. And investigators were interested in the UAE contacts because in January 2017 the UAE arranged a secret meeting in the Seychelles between a Russian sovereign wealth fund manager and Erik Prince, an informal Trump campaign adviser and the founder of the controversial Blackwater security firm. Prince is the brother of Education Secretary Betsy DeVos.

Regarding the Manhattan meeting, Schiff asked Kushner, “Were there any other parties at the meeting other than the representatives from the UAE, yourself, Mr. Bannon, Mr. Flynn?”

“I can recall one person, yes,” Kushner said: “A guy Rick Gerson.”

“And what was his status?” Schiff asked. “Why was he at the meeting?”

“I think he’s a friend of Sheikh Muhammad,” Kushner said, referring to MBZ. Kushner added that Gerson came to the meeting as part of the UAE delegation.

Kushner’s description of Gerson was misleading at best. He was far more than merely “a guy.” According to Mueller’s final report, Gerson was a longtime pal of Kushner and an informal Trump campaign adviser who worked during the presidential transition “arranging meetings” for Kushner. This included the including the December meeting with MBZ and the Emirati delegation. By calling Gerson just a “guy” Kushner held back a crucial piece of information: Gerson was essentially a Kushner operative who was also working for the UAE.

As the New York Times explained back in 2018, “Mr. Kushner has been friends for more than a decade with Mr. Gerson’s brother Mark, a founder of the specialized research company Gerson Lehrman Group. Mark Gerson was also an early investor in Cadre, a real estate technology company founded by Mr. Kushner and his brother, Josh.”

Why would Kushner want to distance himself from Gerson and not acknowledge his close tie to him? Kushner’s lawyer, Abbe Lowell, did not respond to a request for comment.

But soon after the meeting between Kushner and the UAE, Gerson became involved in an odd episode. In January 2017, he traveled to the Seychelles, and, according to the Mueller report, Gerson was there “around the time” that Prince flew to the island nation to meet secretly with MBZ and Kirill Dmitriev, a Russian hedge fund manager who was tasked by President Vladimir Putin to reach out to Trump insiders. Last year, the House Intelligence Committee asked the Justice Department to prosecute Prince for making false statements to the committee about his meeting with Dmitriev.

The Seychelles meeting has never been fully explained. Was the Trump campaign, through Prince, trying to set up a private back channel to Moscow? The Mueller report offered no definitive conclusion about the meeting. But it noted that in December and January of 2017, Gerson worked with Dmitriev on a proposal for reconciliation between the United States and Russia. Gerson gave a document outlining a plan to bolster US-Russia relations—which Dmitriev, according to the Mueller report, “implied” Putin had cleared—to Kushner. Kushner passed on copies to Secretary of State Rex Tillerson and to Bannon, the report says.

Why would Kushner say that Gerson, his friend and adviser who seemingly served an important role as an private emissary for Kushner to Russia and the UAE, was just “a guy” who attended the secret meeting with the Emirati delegation because he was “a friend of the Sheikh?” This answer raises the question of whether Kushner was attempting to avoid revealing his tie to a go-between connecting the Trump camp and a Putin operative.

A House Intelligence Committee spokesperson declined to comment. Gerson did not respond to a request for comment.

The transcript is the latest development that raises questions about Kushner’s foreign contacts during the campaign. In a November 2017 letter, the leaders of the Senate Judiciary Committee said that Kushner knew of a “Russian backdoor overture” to the Trump campaign in 2016 but failed to disclose it to the committee when responding to questions and a request for documents they sent him. In 2018, Mother Jones reported that Kushner had told congressional investigators that he did not know of any contacts between the Trump campaign and WikiLeaks during the 2016 presidential campaign, despite evidence that showed Kushner knew of contact during the campaign between Donald Trump Jr. and WikiLeaks.

More than three years later, as Trump tries to erase these lies and omissions from history, they are more important than ever.