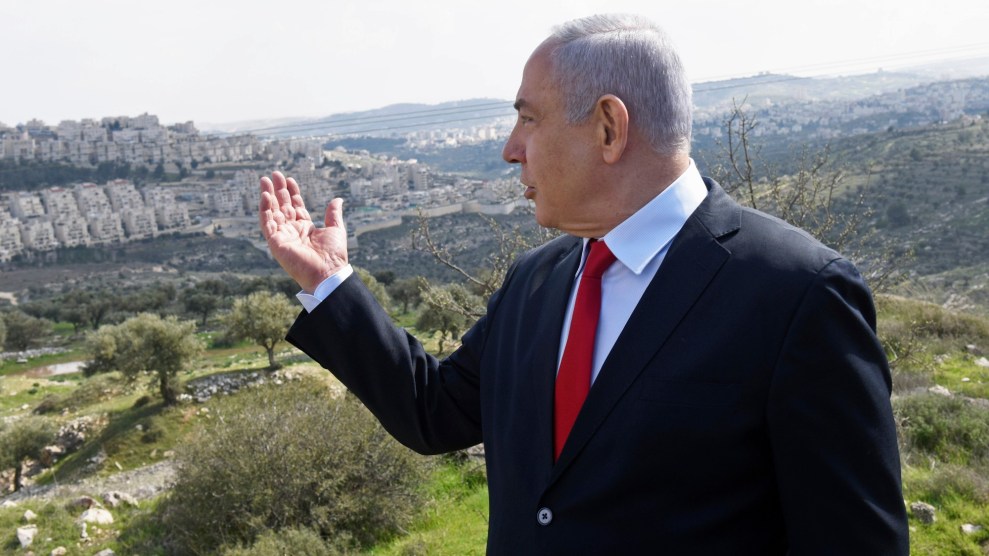 Israeli Prime Minister Benjamin Netanyahu on Feb. 20, 2020 visiting an area where a new neighborhood is to be built in an East Jerusalem settlement.Debbie Hill/Pool/AP

Rank and file Democrats are trying to walk a thin line on Israel. Almost all Democrats want to discourage Israel from moving ahead with a plan to begin taking control of parts West Bank as soon as this month. Israeli Prime Minister Benjamin Netanyahu appears eager to rush forward to capitalize on a “peace plan” backed by Donald Trump that allows Netanyahu to annex up to 30 percent of the West Bank, despite Palestinian opposition, before Trump’s potential defeat in November. Former Vice President Joe Biden, who boasts a growing lead in polls, opposes annexation and says he will “reverse Trump’s undercutting of peace.”

Most House Democrats, 191 of them, have signed a letter opposing Netanyahu’s plans. In May, 19 Senate Democrats signed off a letter warning Netanyahu that he risks losing bipartisan support. “We caution you against taking unilateral steps that would fray our unique bonds, imperil Israel’s future and place out of reach the prospect of a lasting peace,” the senators wrote. “If you move forward with unilateral annexation, we would not support that action.”

That is straightforward enough. But congressional Democrats are less clear on using their power over spending to enforce that view. Most Democrats are unwilling to flatly threaten to limit the billions of dollars in annual US financial aid to Israel if Netanyahu proceeds. Rep. Alexandra Ocasio-Cortez (D-N.Y.) has circulated a letter, reportedly signed by a dozen progressive lawmakers, that threatens “legislation that conditions the $3.8 billion in US military funding to Israel to ensure that US taxpayers are not supporting annexation in any way.” Even that language is not especially clear. But before the letter was finalized, it drew denunciation from the hawkish American Israel Public Affairs Committee. And most Democrats want to stop short of progressives’ position.

Yet some Democrats also want to cite the potential threat to discourage Israel from moving ahead. That leaves some members attempting to explain that annexation would endanger US aid to Israel without themselves explicitly supporting such a condition. During a Zoom call Wednesday hosted by J Street, AIPAC’s liberal rival, the result was a bit muddled. Rep. Jan Schakowsky (D-Ill.) said that unilateral annexation “will jeopardize bipartisan support for Israel and it will put on the table the issue of withholding money from Israel.” It would be “very bad timing…not heed what Joe Biden is saying, what Congress is saying,” she said. But Schakowsky said that is her advice to Israelis on the political circumstances in the US, not her own position.

Sen. Chris Van Hollen (D-Md.) expressed a similar sentiment. But Van Hollen, one of the signers of the Senate letter, then hastened to “clarify” that he was not altering his longstanding support for “robust security funding” for Israel. Instead, he said: “It is important to draw the line with respect to those dollars being used to advance unilateral annexation.” Schakowsky endorsed this suggestion. “We want to make it clear that there are certain places we don’t we don’t want the money to go,” she said.

The Democrats here seemed to suggest that legislation would not limit US financial support for Israel, but would specify funds not be used to annex territory. That may make sense politically. But it was left to Ofer Shelah, an Israeli legislator from the centrist Yesh Atid party who was also on the call, to point out that in practice US lawmakers cannot effectively dictate how aid money, once appropriated, is spent. Money is fungible. “That’s very difficult for Congress to say once the money is gone,” Shelah said.

Shelah urged Democrats against even hinting at restrictions on aid. “If a Democratic president is coming in [saying] ‘I will have second thoughts about military aid to Israel’, it will be construed in a very negative way,” he said.

He probably need not worry. Democrats have gotten that message.